World War II ended officially on 2nd September 1945. On the surface, harmony was restored in most of the world, and all out efforts were being made on reconstruction & rehabilitation.

Creation of organizations like the UN promoted the thought that it would take serious effort to bring the world close to conflict once again. However, very quickly the two major victors of WWII were rising against one another, trying to extend their spheres of influence as far as possible.

One of these advocated the democratic way of government and was led by the US while the other backed Communism, i.e. the Soviet Union. After the Korean war, the next major cold war battlefield became Vietnam.

The U.S. government viewed its involvement in the war as a way to prevent a Communist takeover of South Vietnam. This was part of a wider containment policy, with the stated aim of stopping the spread of communism. The North Vietnamese government and the Viet Cong were fighting to reunify Vietnam. They viewed the conflict as a colonial war, fought initially against forces from France and then America, and later against South Vietnam.

American involvement in the war peaked in 1968, the same year that the communist side launched the Tet Offensive. The Tet Offensive failed in its goal of overthrowing the South Vietnamese government, but became the turning point in the war, as it persuaded a large segment of the United States population that its government’s claims of progress toward winning the war were illusory despite many years of massive U.S. military aid to South Vietnam.

Gradual withdrawal of U.S. ground forces began as part of “Vietnamization”, which aimed to end American involvement in the war while transferring the task of fighting the Communists to the South Vietnamese themselves.

Despite the Paris Peace Accord, which was signed by all parties in January 1973, the fighting continued. In the U.S. and the Western world, a large anti-Vietnam War movement developed as part of a larger counterculture. The war changed the dynamics between the Eastern and Western Blocs, and altered North-South relations.

Direct U.S. military involvement ended on 15 August 1973; a cease-fire was declared across North and South Vietnam, and U.S. prisoners of war were released.

North Vietnam, however, was determined to take over the South and continued offensive operations.

The final blow came in early 1975 when the NVA and Viet Cong managed to reach the outskirts of Saigon, the capital of South Vietnam with a total force of 120,000 men. Saigon was the epicenter of all planning & operations. 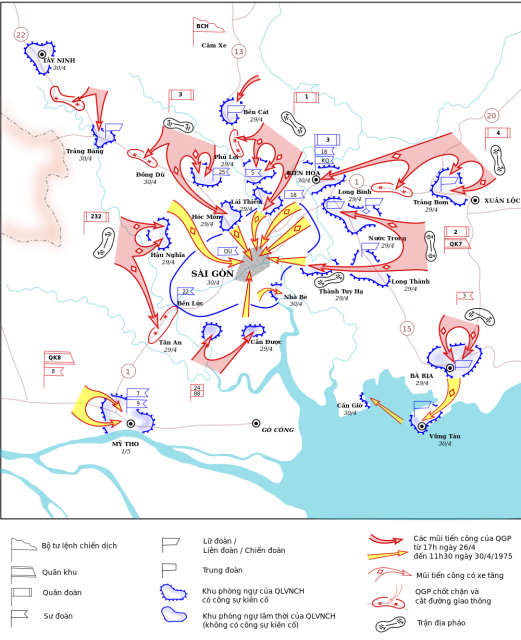 As the Northern forces moved closer, the South Vietnamese Army started to disintegrate, and President General Thieu fled to Taiwan.

Supported by both artillery and armor, the North Vietnamese continued their march unhampered, capturing all the major cities. The South Vietnamese forces were retreating in a haphazard way which boosted the North’s morale even further.

The CIA officers stationed in Saigon recommended that nothing short of B-52 strikes could stop the advancing army, something which was no longer feasible or possible due to growing anti-war sentiment in the US.

On the 9th of April, the PAVN forces reached the capital’s last line of defense Xuan Loc where the 18th division of the South’s Army made a last stand, holding the city for several days. But even they couldn’t stop the advance. Downtown Saigon was now only 26 miles away, and the Americans were getting ready for evacuation.

Meanwhile, the PAVN was busy encircling the city after taking the Mekong Delta area.

The Americans had started leaving the city as early as March, after analyzing the pace of advance of the PAVN. Throughout April, the speed of evacuation increased several folds as the Defense Attache’s Office started flying out non-essential individuals.

On April 3rd, President Gerald Ford ordered Operation Babylift, which would fly out 2000 orphans out of the country as well as Operation New Life which flew out 110,000 Vietnamese. Such actions made it clear that the West had little resolve to fight anymore while the South Vietnamese Army was nothing compared to the North in a head to head fight.

On 28th April, the PVAN reached within 3 miles of Saigon’s center. A 24-hour curfew was ordered within the city while the Americans decided to evacuate their remaining servicemen out of harm’s way.

Before daybreak on April 29, Tan Son Nhat Airport was hit by rockets and heavy artillery. In the initial shelling, a C-130E Hercules was destroyed by a rocket while taxiing to pick up evacuees. The crew evacuated the burning aircraft on the taxiway and departed the airfield on another C-130 that had previously landed.

The continuing rocket fire and debris on the runways caused General Homer D. Smith, the U.S. defense attaché in Saigon, to advise the Ambassador that the runways were unfit for use.Helicopter evacuation was the only option left.

The main evacuation point was the DAO Compound at Tan Son Nhat; buses moved through the city picking up passengers and driving them out to the airport, with the first buses arriving at Tan Son Nhat shortly after noon.

The first CH-53 landed at the DAO compound in the afternoon, and by the evening, 395 Americans and more than 4,000 Vietnamese had been evacuated. By 23:00 the U.S. Marines who were providing security were withdrawing and arranging the demolition of the DAO office.

The Americans and the refugees they flew out were generally allowed to leave without intervention from either the North or South Vietnamese. Pilots of helicopters heading to Tan Son Nhat were aware that PAVN anti-aircraft guns were tracking them, but they refrained from firing. The Hanoi leadership, reckoning that completion of the evacuation would lessen the risk of American intervention, had instructed Dũng not to target the airlift itself.

The original evacuation plans had not called for a large-scale helicopter operation at the United States Embassy in Saigon. Helicopters and buses were to shuttle people from the Embassy to the DAO Compound. However, in the course of the evacuation, it turned out that a few thousand people were stranded at the embassy, including many Vietnamese civilians.

Thunderstorms increased the difficulty of helicopter operations. Nevertheless, the evacuation from the Embassy continued more or less unbroken throughout the evening and night.

At 03:45 on the morning of April 30, the refugee evacuation was halted. Ambassador Martin had been ordering that South Vietnamese be flown out with Americans up to that point. Kissinger and Ford quickly ordered Martin to evacuate only Americans from that point forward.

The American ambassador was flown out of the capital at 0500 on April 30th while the Marines who guarded the entire operation were the last to go, at 0753 by Huey Helicopters from the embassy roof. They left several hundred Vietnamese behind.  The embassy evacuation had flown out 978 Americans and about 1,100 Vietnamese.

The PAVN with their T-54 and T-55 tanks burst through the gates of the Presidential Palace later that day. There they found Minh along with his advisors ready to surrender and bring the war to an end. Later that day, Minh announced on the radio that the South Vietnamese Government had completely dissolved at all levels and the war was over. 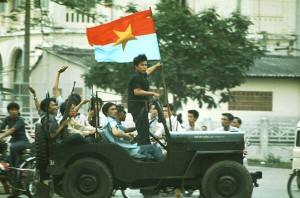 Saigon was renamed Ho Chi Minh City, after former North Vietnamese president and the city was kept under martial law for quite some time. During the years following the war, the communist forces took revenge from the citizens of Saigon by putting them in re-education camps.

Torture and executions were carried out in Hanoi Camps. The story didn’t come out until almost a hundred survivors made their way to the US where they revealed a government-backed instrument of torture.

For the North Vietnamese, the 20-year war had come to an end, and Socialism was finally implemented within the country. Victory parades were held within the city and April 30th was declared a public holiday.