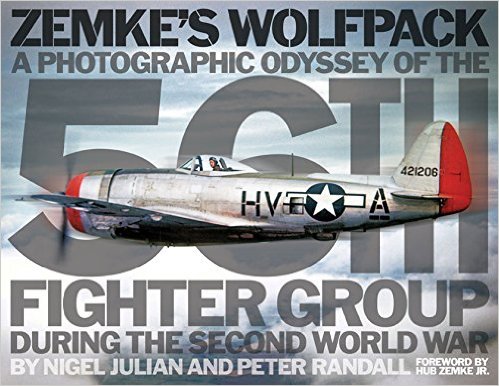 Colonel Hubert Zemke was the personification of a leader possessed of immense discipline and personal strength. He combined courage with the unswerving respect he commanded from the men who served under him and was one of the war’s greatest leaders. The confidence he engendered turned his 56th Fighter Group – the Wolfpack – into a legendary combat unit.

This exceptional photographic history from Nigel Julian and Peter Randall brings us every facet of the 56th, not just the pilots; but also the technical and support elements of the unit. It has the feel of a comprehensive history and there is little wonder for this book is, in many respects, the sum of a lifetime’s work and, as such, we should treat every page with a big dollop of respect. As odysseys go, this one is pretty special.

The quality and range of photographs is breath taking. Needless to say, the images are backed up by very detailed captions and as I don’t have anything like enough knowledge to comment on the subject I think it is safe to assume the quality of them is beyond reproach. This book reflects strongly on the vision of the guys running Fighting High. The very fact they were willing to step out of their RAF comfort zone tells us there is something special about this book.

The record is stuck again, so here goes – you can read it all in one sitting or enjoy it in parcels. But, it isn’t a flick through jobby because there is just too much going on. The cleanness of the layout and the style of the thing is very cool.

I found the captions a little difficult to read in some artificial light – but a long summer evening is perfect for it.

Very nice, but what about the book itself?  We are treated to a deadly serious history from the authors who see as much importance with meteorologists as they do aces. The effect is an equality of interest on all levels so the guys cleaning the bogs get the same billing as those shooting down Germans. We are being told they all won the war, not just the flyboys. Every man had a role to play securing victory. I really like this aspect.

The 56th were famous for flying the massive P-47 Thunderbolt, a bloody great lump of a plane that seems to defy the logic of aerodynamics. Brutal on the senses; it really is a beast putting the much prettier P-51 to flight. I am reminded that even Steve Earle was sufficiently impressed to include a reference to the Jug in one of his songs.  The mix of colour and black and white images of a raft of P-47s and many other types form the spine of the book, but it is the people who are its strength. They shine through the pages and bring the 56th back to life. They are real for us.

Aside from my problem with modern light bulbs I really cannot find fault with this wonderful book. It is a thing of beauty and is, surely, a serious game changer

for our friends at Fighting High.  How well their RAF histories have sold outside of the Commonwealth I do not know, but this one must surely open up the crucial US market. Believe me, Americans; you will love this book. It is an example of the best kind of photographic history and as a disciple I am in no doubt it will go great guns. Contented readers  will find new details for months if not years to come.

I have to commend the authors for their commitment and skill and hope they feel vindicated. I sure as hell would! They have produced a masterpiece.  Being a soppy old sod at heart I feel I can allow myself the use of an awesome on this occasion. It is a word never knowingly overused in our world of reviews and we pride ourselves in keeping such descriptive hype off your screen. But every now and again something comes along that makes the adjective perfect for the moment. Awesome! Go get.