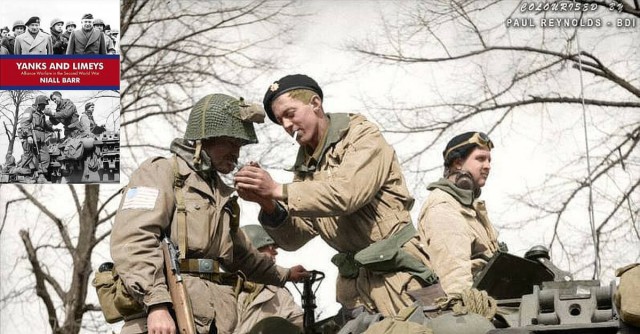 However serious a student of World War II you are and whether you live in Boston, Massachusetts or Boston, Lincolnshire, the story of the Anglo-American Alliance between 1941 and 1945 is littered with rivalries, hostility and misunderstanding.  There is a received history promoting the dynamism and straight up hard fighting qualities of the Americans on one hand and the perfidious, imperialist and cautious Brits on the other. This has led to some of the leading characters of the Alliance becoming caricatures of their true selves as they fit into the competing stories about them.  Is it really possible to get down to the reality of those tumultuous years after all this time to assess what actually happened and how the Alliance worked? Niall Barr proves the answer is a resounding  ‘yes’ and he does it with style.

From the outset the serious issue is whether an author can take on such a potentially awkward subject without being accused of bias. I can tell you this is a genuinely balanced book that finds the good, the bad and the ugly in the military of both nations and he is at pains to point out that there was plenty of internecine strife going on within the British and American camps even as they set about each other. He reminds us that thanks to more than half a century of topsy-turvy historiography the Alliance has been absorbed into it’s leading characters rather than discussing the immense achievements.  The battle of the memoirs post 1945 was a trifle unseemly and not a little dirty at times and it has left books that colour our perceptions over half a century after they were published. Wars of words rather than just the War have come to define much of our understanding of the Alliance. I used to have a boss who demanded “I don’t care about the negative stuff, tell me about your achievements.“  For me far too much about the standard issue story of the Alliance centres round the politics and not about war winning success.

Mr Barr is at pains to show how well the Alliance worked and all that it achieved. He contends that much of this has been forgotten because it is so much easier to focus on the personalities and caricatures. So many accounts stick to the cardboard cut out representations of national traits rather than look deeply at the results.

I’ve read a lot of books about Monty and Churchill and I am not a fully paid up member of their fan clubs. We’ve covered Churchill here before but Monty is always good for a paragraph or two.  All the good he did, his brilliance as a trainer of troops, his understanding of military principles, his adherence to firepower and balanced forces and his belief in sound military judgement remain shattered by his awkward, some would say awful personality. He schemed, he fibbed; he told whoppers. He could be utterly annoying. But there was so much more to this man. He had a view of things and how to get them done that was the model of clarity and professionalism. He was vain and he was a bit of a basket case but he was a winner and he cared about the lives of his men.

Monty understood that his country could not afford to be profligate with lives.  He had learned on an earlier Western Front that wasting lives was disastrous on every level. By 1944 the pot was empty, Britain did not have the luxury of a huge supply of manpower. This is the very basis of the accusations of cautiousness. Monty believed some American generals treated lives like kit; they could always get more. He couldn’t and wouldn’t.

Monty had made plenty of enemies within the British military hierarchy, Tedder and Coningham loathed him and schemed against him continuously. We know that in the American camp that Bradley developed a loathing of Patton’s style and methods. The Battle of the Bulge proved Bradley’s fallibility and Patton’s brilliance but there were other occasions when American generalship was off balance and wrong and being corrected by Brits made it all much worse. The British attitude to the Americans goes beyond just being paternal at best or patronising at worst. Some senior officers were convinced the Americans were ill equipped to deal with all the elements of command. The older ones had seen Pershing’s misconception of how trench warfare should be fought during the Great War and nothing told them anything had improved. The flipside is an American command and staff who felt the British had nothing to teach them after such a woeful period of defeat and disaster. Somehow a small number of people held it all together and it was the cheerleader of alliance warfare, Eisenhower, who must surely be considered one of the greatest men of the age.

Disdain for Eisenhower on the part of Monty, Patton and others proved to be a huge miscalculation on their part. Ike had grasped the realities of alliance warfare and he kept it all together. It wasn’t always perfect and it was rarely pretty, but the great man steered the ship with a combination of personality and charm and the debt we owe him is immeasurable. If we want to focus on a single character, it is his, because he was so brilliant.

Mr Barr only focuses on the army campaigns in Europe, saving us from too many bruising encounters with Admiral Ernest King and any of the stuff surrounding Lord Mountbatten and SEAC. There is enough to contend with in North Africa and Italy before we even get to Normandy. I grew up in a home where Mark Clark’s name was mud and the story, apocryphal or otherwise about him ordering Americans to fire on any Brits they saw attempting to get into Rome when the city was taken is probably just an illustration of the difficulties of alliance warfare when egos and understanding are as Venus and Mars.

This is not a one-dimensional book. The author takes us back to pre-revolutionary America to see how the image of the British redcoat developed on the continent well before the shot heard round the world at Concord or Lexington (you choose).  The burgeoning US Army was much more influenced by French and German systems than anything from Britain and we learn from Mr Barr that there was very little contact or exchange of military ideas between the two nations prior to the Great War and, indeed, after it. The two armies were not so much chalk and cheese but total strangers. The Great War offered potential for change but Pershing’s obdurate adherence to the primacy of the rifleman was out of place in 1914, not just 1918 but his insistence on an independent American army fighting as one seems to have been a correct choice.

Come the Second World War there was absolutely no reason why American troops should have a good impression of their British counterparts when they began to arrive in the UK in early 1942. A wretched cycle of defeat could hardly mean the British had anything to teach the Americans on the surface of things but they had begun to learn from bruising reverses and were beginning to build on principles of warfare that would eventually defeat the Germans. Mr Barr does not excuse the instances of patronising behaviour by some British officers but he attempts to get to the bottom of it rather than obsess with shallow assumptions.

I hoped for a bit more from the ordinary rank and file but it was not an aspect in need of repetition. Again, Mr Barr confirms that at the lowest level there was a healthy understanding and not a little mutual respect in many cases. The well-known disparity of salaries and quality of uniforms is worth mentioning nonetheless. When I look at snaps of my infantryman Dad in his 37 Pattern battledress it is easy to appreciate why he didn’t have a hope with the childhood sweetheart who married an American serviceman instead. The uniform wasn’t modified to take a shirt and tie until so late in the war it hardly mattered.

American troops couldn’t stomach British rations and the thing with Tommy and his tea just baffled them. Mr Barr tries to explain this, too.

At the end of the day, divisions over language, tactics, strategy and tea breaks were brushed aside by the reality of victory on the battlefield in 1945. But for some in my country it was all a bit hollow. Britain was tired and broke just as the United States was ebullient and ready to enjoy the fruits of victory.  For Britons the reality was rationing, cuts and diminished power in the new world order. There is an argument the British didn’t win the war, they came second. I have long held that view and it always hurts. But better to be a junior partner than a loser and the truth is the lie that America won the war for them was not borne out on the European battlefield in 1944 and 1945. Just as in the Great War painful lessons had been absorbed and the British army that won victory in 1945 had come as far as Douglas Haig’s a generation earlier.

America’s victory was the emblem of a new world order and with all that power has come decades of confusion of just what to do with it. But that is another story altogether. This superb book explains so much and I do so admire the author’s sincerity. His book is balanced, honest and well written and the clarity of his arguments made them compelling and easy to accept. Seventy years on perhaps we should concentrate on the fact that the Germans were beaten and leave the victors to rest. They deserve it.