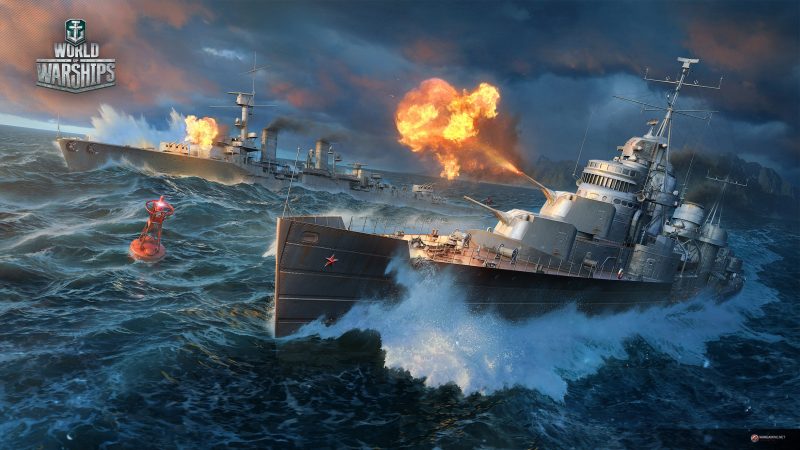 From you moment you start it up, World of Warships is a game that forces you to love it. The “dock” menu houses all of the ships you own and is where you’ll be spending most of your time when you’re not fighting, but really it feels less like a menu and more like an art gallery. The graphics are stunning, truly beautiful ; all of the ships are rendered in exquisite detail, beyond what I expected before I downloaded the game, right down to the smallest bits; rigging, ladders, rust stains and other minute things, which all come together to give the ships a real sense of character.  The quality of the graphics translates perfectly into the battles, with all the same lustre and detail as on the menu screen.

The “information” tab for each ship provides a wealth of history which makes extremely interesting reading, and really helps to bring them to life. It’s obvious that an exceptional level of care has been put into this game, and you can’t help but admire it.

All of that said, for a game to simply be beautiful isn’t enough, the gameplay has to be fun and interesting, and luckily World of Warships doesn’t disappoint.

The basic premise of the game is simple, two teams of twelve historical battleships face off against each other in an all out battle to the death for naval supremacy. Point click, shoot, and blow stuff up. It’s pretty easy to get used to all of the controls and mechanics; most players should get the hang  of it after a few hours at most.

As you play battles you earn experience and credits, which can be used to buy upgrades and better ships, which are split into 10 tiers.  There are four classes of warship – carrier, battleship, cruiser and destroyer – each with their own unique role to play.  The game does a great job of balancing the strengths and weaknesses of each.

Carriers are vulnerable in a straight up fight, but the range of their aircraft means they can stay safely out of range of the enemies’ guns whilst they direct their bombers to cripple opponents ships, or fighters to defend their allies from air assault themselves. 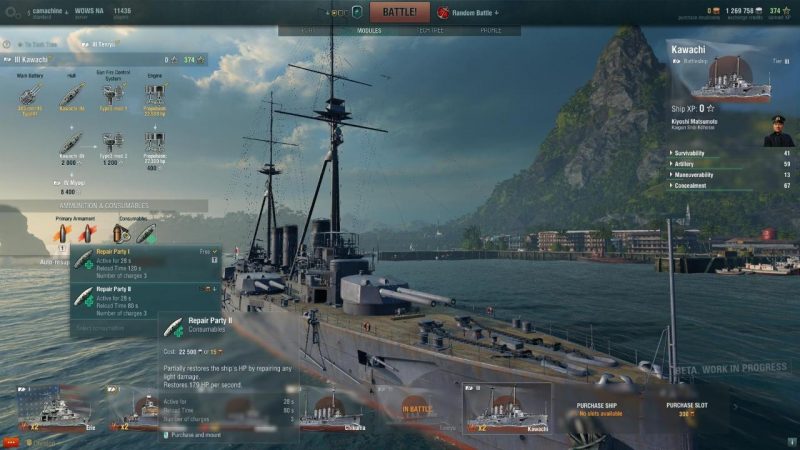 Battleships are huge juggernauts, heavily armoured and monstrously armed, but slow, hard to manoeuvre and with reload times of up a minute. These qualities mean that the battleship can punish foes from afar, but make it extremely  vulnerable when isolated and in close range.

Cruises fulfil a middleweight role, packing enough artillery to exchange volleys with the enemy line, but being fast and manoeuvrable to get themselves out of sticky situations. Carriers are perfect for escorting allied battleships or carriers, as well as screening for speedy enemy destroyers.

And finally Destroyers, my personal favourite; stealthy and lightning fast, destroyers speed across the battlefield scouting for enemies and threatening ships of all sizes with their powerful, but relatively slow, torpedoes.

World of Warships is a game that rewards tactics, forward planning and, most importantly, teamwork, and a person who knows how to play to their ships role will always do well. You have to be careful and aim ahead of enemy ships, as you shots can take a good 15 seconds to get to their target.

As you unlock and play with higher tier ships, new gameplay elements are introduced to you: different maps are available for different tiers of ships, which gradually introduce you to different tactics and playstyles, and as you play with more advanced ships the difference between each of the classes becomes more and more profound, helping to slowly ease you into their different roles. This is one of the things that makes World of Warships a really rewarding game to play you to learn and improve in a very organic manner without , and you really feel like you’re accomplishing something as you see yourself adapting and getting better over time. 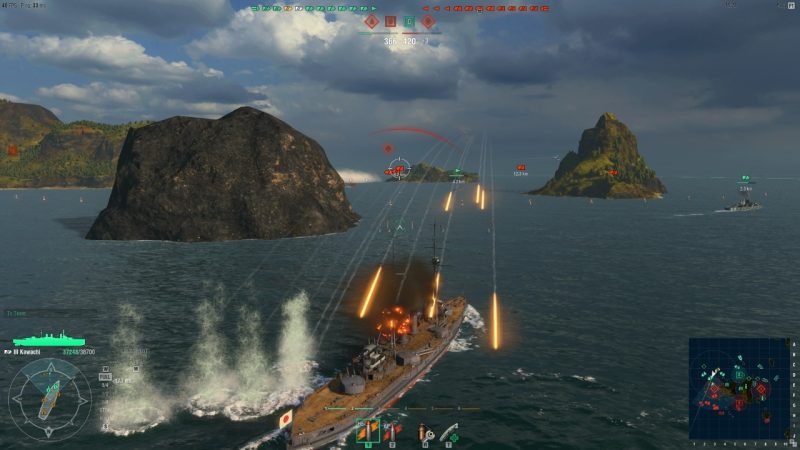 One initial concern of mine when I first started playing this game was about the maps, specifically if there would be enough variety, but I needn’t have worried. A strong set of battlefields, ranging from open sea, to island clusters, to treacherous arctic waters littered with icebergs, keeps things fresh and interesting. This, combined with the impressive array of unique ships and classes, lends the game a real sense of depth and allows for a tremendous amount of replayability. No two battles ever feel the same and you never feel like you’re just repeating something you’ve done before.

Overall, World of Warships is a great game; learning and evolving and you try out different ships is a really rewarding experience. It can be a bit annoying when you see your shots sail through the air only to miss by just a few metres, or if you get an over-eager team who rush into battle and die in the first minute, but seeing everything, but seeing everything come together as your artillery or torpedoes smash into their targets whilst enemy ships burn around you is absolutely awesome.

That isn’t to say, though, that the game isn’t without it’s issues; the biggest of which is with the matchmaking system.

When you enter a battle, the game tries to match players with other ships of the same tier and make sure the teams are balanced. Playing by myself, I’ve found the matchmaking system to work perfectly, never playing ships more than one tier about me. However, it’s less reliable when playing together with a friend; sometimes you’ll find yourself in a match with warships two or, rarely, even three tiers above you, which can be pretty frustrating at times.

Another thing to point out is that as you work your way along the tech tree you may well end up with a ship you just don’t like that much, but need to play with to unlock another ship that you really do want. In these instances, although they’re unavoidable, it can feel like a bit of a slog to earn the experience or credit points you need. 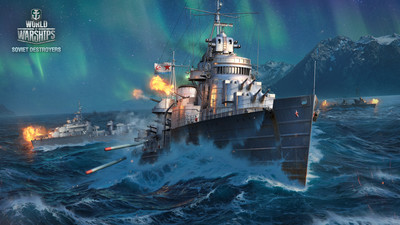 It’s also worth noting that World of Warships does operate the “freemium” model, whereby the game itself is free, but players can pay real money to access additional features, in this case in game money, a boost to the rate at which you earn experience and credits, as well as certain premium ships. Unlike some other games, however, World of Warships is well balanced; with premium features serving as a time saving mechanism more than anything else, and no special advantage given to those who choose to spend money on the game.

– Ships look cool when they blow up

– Some issues with the matchmaking system when playing with friends

– It can take a while to save up for some ships

Most importantly, I have an absolute blast every time I play this game, and I can see myself coming back to it a lot in the future, so I’m gonna go ahead and give World of Warships an excellent 9.7/10, along with my strong personal recommendation.  Whether you’re a big gamer, a history enthusiast, or just like explosions, this game is well worth checking out.