My esteemed colleague Phil Hodges is a big fan of Osprey books but he has been a bit busy working as a fighter pilot in some planetary system or other on our cinema screens and the more earthly pleasures of reviewing these books falls to me.

I have before me two superb books from the Weapon series that illustrate the quality of these products.  It would be easy to underestimate them because of the format and use of original artwork, a hallmark of the Osprey range; but do not be fooled. These books offer in-depth history in an attractive style. They are affordable and most definitely collectable.

I have chosen to discuss these two in one review because it makes good sense to me.  If ever there were two series of weapons that have had a huge impact on history it is the Winchester and Mauser rifle.  The two are synonymous with conflicts in a diverse field of theatres and actions. They also have a place in popular culture. Although the Winchester is the more iconic of the two, the Mauser has earned its position as a weapon identifiable not just with the Germans but many more armies and factions. If you were to look at images of many late 19th or early 20th century soldiers from a rainbow of countries, you will see far more of them carrying Mausers than any other rifle of the day.

The development of the Winchester, the rifle we know from countless western movies and TV shows, is a fascinating story and being enthusiastic, but largely ignorant; I was keen to delve into it first.  Rapid advances in 19th Century firearms are best illustrated by the incredible work done in the United States by

a succession of gifted engineers and entrepreneurs who tapped into the appetite for guns in a rapidly expanding country.  Although several pistols have their place in the Pantheon it is probably the range of Henry and Winchester rifles that

sum up those times with the creation of something immediately identifiable for the era they represent perhaps more so than the men who made them.  Just like a Model T car or a Coca-Cola bottle, the rifle has a place at the top table in the hall of fame of design classics.

Unfortunately, I have never had the pleasure of shooting one, but I have managed a few rounds with a Mauser, in the shape of the World War II period Kar 98K.  I wish I could tell you I had made a good job of it, but I proved to be much more at home with a 1916 vintage SMLE and even earlier brutes.  Regardless of my ineptitude, the Mauser was an export giant. There are many varieties with many built under licence, but the layout is generally the same. From Serbia to the Veldt, this rifle was essential kit for decades and although it will be best remembered in German hands during two world wars it was used in countless conflicts from the Balkans to Spain and beyond. There must still be countless numbers of them in circulation.

Series editor Martin Pegler is a respected former Senior Curator of Firearms at the Royal Armouries where an enviable collection of weapons has been amassed over a century or more. One of the first books on firearms I ever bought was an encyclopaedia of military small arms way back in the 1970s. It was reliant on illustrations from the famous Pattern Room at the long lost Royal Small Arms Factory at Enfield, a place I had fanciful ideas of getting a job at when I lived nearby. I still like the idea forty years later.

The contents of the Pattern Room are held at the National Firearms Centre within the Royal Armouries. Guns are not to everyone’s taste, but I find the engineering and solution to problems embodied in the Winchester, fascinating. The Mauser is the model of industrialisation at it’s most efficient and while to say you cannot get more efficient than the Germans is little hackneyed these days it was always deemed true. It is hard to argue the notion has changed all that much.

Author Neil Grant has a track record with weapons of various kinds and I imagine his other books about firearms for Osprey are as readable and informative as this one.

Of the two books, I have to say the Winchester seems more attractive, but this is swayed a great deal by the glorious use of illustrations depicting cowboys and characters of the American west. They were hard men (and hard women!) from tough times but the fact their world seems so appealing is the fault of the movie industry and my own fallibility. I doubt I am alone on that score! The imagery in the Mauser book is equally as efficient and varied. My favourite shot shows a huge pile of thirty thousand rifles surrendered by the Germans in Norway back in 1945. What happened to all that lot?

I know my guns but to claim expertise would be crass in the extreme. I cherish opportunities to do a bit of shooting but they are often few and far between. Books like this are not an alternative, but they are an education and I would welcome the chance to see more of the series.

There is no substitute for having a go. I don’t mind admitting that if I ever do one of those trips to Vegas or similar where gun ranges can be a bit of a jolly day out, I know what I would like to shoot and the Winchester is high on my list. Having proven useless with the Kar 98K, I don’t think I need to repeat the exercise – but it was a hoot and lives didn’t depend on it.

This range of books offers solid and entertaining history at a very competitive price. The books retail at less than twenty US dollars or thirteen pounds sterling.  That is good value in anyone’s currency, so now you know where to look for high-quality affordable firearms history. Great stuff. 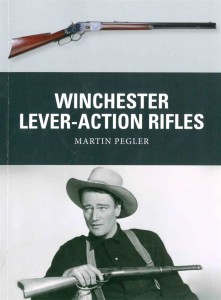 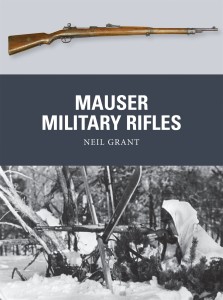