Where Eagles Dare is a World War 2 movie that was made in 1968. This movie starred Clint Eastwood, Mary Ure, and Richard Burton. The director of this movie was Brian G. Hutton, and it was filmed in Bavaria and Austria.

The novel, upon which the movie was based, was written by Alistair Maclean, who also wrote the screenplay and this is one of the reasons that the movie is faithful to the book version.

A British aircraft is attacked and shot down in territory occupied by Germans, during WW2. The only survivor of this crash, an American General, is taken prisoner by German troops and they take him to the local SS headquarters.

This is in the Schloss Adler, a castle in Bavaria that is known for being almost impossible to breach.

Unknown to the Germans the General knows every detail of the D-Day operation, and so the British decide to rescue the General to prevent these details coming out during any interrogation.

A commando team is ordered to rescue him, with Major John Smith leading them. 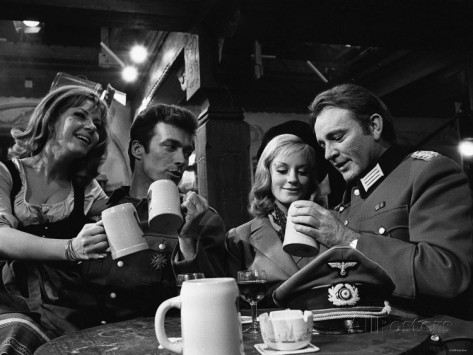 Within this team, there is an American Ranger (Lieutenant Schaffer) who is baffled as to why he is included in this operation when it is a British operation.

Following the death of one of the commando team members, Schaffer begins to suspect that this mission has an objective far more secret than he’s been led to believe. 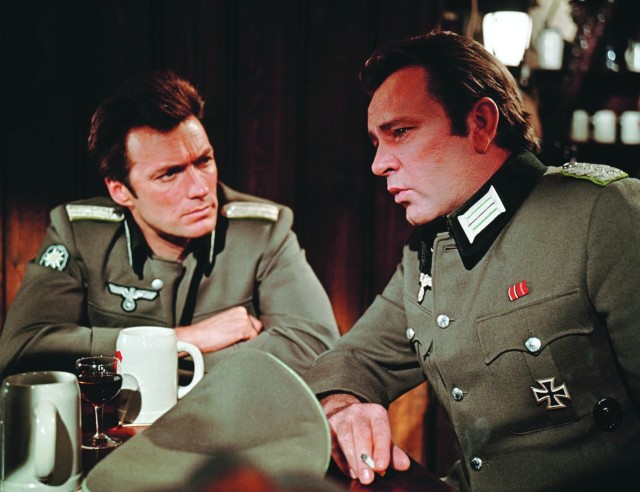 During the first year of release, this movie took $6,560,000 worth of rentals in the box offices of North America.

It was number 7 in the list of most popular movies at box offices in the UK in 1969.

It was number 13 in the list of most popular movies at box offices in the US.

Within the movie, the total body count is 100.

Clint Eastwood’s character kills more people within this movie than any other movie he’s played in.

‘Where Stuntmen Dared’ is the name that Clint Eastwood referred to the movie as.

The scenes shot in Schloss Adler had to be done elsewhere, due to the castle being used as a camp for police in training. They utilized Schloss Hohenwerfen instead, in Austria. There were no cable cars at this location, unlike Schloss Adler, so some scenes had to be filmed elsewhere.

The location Schloss Hohenwerfen is open to the public, and if you visit you’ll see it is falconry. You may recognize the exterior of the building and the courtyard from the movie.

The actor playing Major Von Harper, Derren Nesbitt, was almost blinded when the squibs held within his chest piece blew upwards instead of outwards during his death scene.

His character was meant to be shot in the chest, and head but the movie only depicts the head shot.

The aircraft, Junkers Ju52, used within the movie were still in daily use by the Swiss Army; this army also provided T-6 trainers, who posed as German fighters.

In a UK survey, taken by Channel 4, that asked for the top 100 War movies, Steven Spielberg stated this was his favorite.

This movie contains approximately 1472 edits within 151 minutes of actual action. This means the average shot length was 6 seconds. 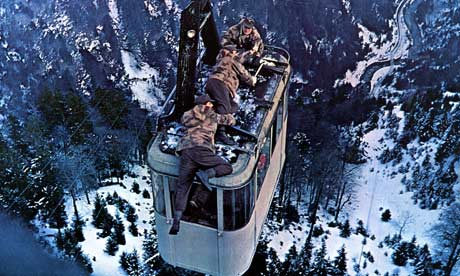 The helicopter seen at the start of the movie is an American Bell 47. This did not enter US Military Service until 1946.

Major Von Happen’s uniform in the movie us one of an Allgemeine SS Officer. The use of this uniform was discontinued before 1944, and these Gestapo agents usually wore just plain clothes or a plain gray SS uniform.

The radio set in the movie that was used to communicate with the headquarters within England was just a low-power VHF transceiver. This only had a range of a couple of miles and did not have the capability of long distance transmissions. 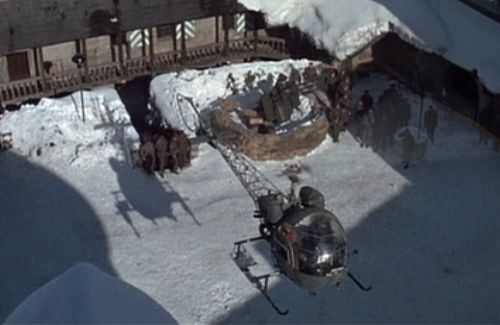 General Carnaby could not have been going to Crete for his ‘rendezvous with the Russians’ as Crete was occupied by Germans and the Russians weren’t privy to any D-Day information – due to security reasons.

As Richard Burton walks across the square you see him saluting a soldier. This would not have happened as an Officer NEVER salutes anyone with a lower rank than himself.

As the coach travels through a village towards the end of the movie you see it move past a tracked vehicle. The vehicle in question is a Hotchkiss LPz; this was not manufactured until the 1960s.

Within the radio room of the castle, you see Lt. Schaffer sneak up on the German soldiers, and you witness soldiers changing the channel of the radio station. The music you hear playing is definitely not a style heard in the 1940’s and more like the 1960’s.

As the team of commandos is getting ready to jump from the cable car down into the river below, the ground view shows a naked road with trees at the side and German vehicles parked near them.

The view from the cable car of the same scene, however, shows a snowy road and no vehicles.

The official Where Eagles Dare Trailer: