The wartime race for the atomic bomb was a drama acted out across continents. The fact the Allies won it cannot be ascribed to any single person or state organisation. It was a massive team effort of gifted scientists and technicians, politicians, military men and a small number of immensely brave spies and saboteurs. In this outstanding book by Neal Bascomb we learn about the race for atomic fusion and Hitler’s desire for a bomb capable of destroying cities. It just so happens that London, his chief target, is where I was born and raised and where I go to work. As I walked across London Bridge this morning it occurred to me that the view east towards Tower Bridge and west into the heart of the metropolis might have been very different if a handful of Norwegians had not destroyed the vital elements of the Nazi nuclear program.

Mr Bascomb weaves an intricate tale of science and espionage mixed with adventure and tragedy. He brings to life a range of characters from the dedicated German scientists attempting to develop the beginnings of nuclear power to the mixed band of patriots who risked everything to free Norway from Nazi oppression. He brings us the British commando engineers who died horrible deaths at the hands of the Germans and the American bomber crews who attacked the all-important plant at Vemork where Heavy Water was distilled.

At its heart the book builds a strong empathy with the people of Norway and all that they endured under German rule.  So many war stories of this nature deal with other countries; so there is a refreshing perspective of the vast reach of Nazi tyranny to take in. The occupiers are as ruthlessly efficient and violent in this story as they are anywhere else. There are scenes of torture and murder and the careful handling of it removing any hint of gratuitousness is a mark of how well the author has treated his story. He does not swerve from confronting the insidious nature of collaboration and how it permeated across the breadth of Norwegian society. Like the real thing, it is just there, lingering throughout, with ultimately tragic consequences for key figures in the story.

The fast paced moments of action and sabotage – real events – are as breathless as any fictional yarn. The reader is at the shoulder of men doing some pretty crazy stuff to ensure the Heavy Water is destroyed. They are not one dimensional and we learn a great deal about their histories and live through the privations and stresses they endure. It was a contest against the Germans and nature and the descriptions of the latter, the storms and the landscape, the wildlife and the beauty of it all, mix really well into a saga of men and machines.

This is not a new or lost story. Many older readers will remember the Kirk Douglas thriller Heroes of Telemark which truncates the major elements into a couple of hours of cinema typical of the mid-sixties. I remember a BBC documentary on the story, mixed with sections of live action to enliven the telling. Just a few years ago I read a Norwegian account translated into English. It was as meticulous as it was flat. The translation was perfect, atmosphere and a sense of drama was somewhat lacking. This book picks up on all those elements and brings the full history to life. The heroes of Telemark become incredibly real with a mix of deep thinking patriots, lovable rogues, killers and curmudgeons. I suppose they match perceptions of Norwegian character found wherever they have emigrated in the last thousand years.

I don’t think I am sticking my neck out suggesting this plot is ideal for a mini-series in the Netflix/HBO mould rather than a new movie. The reality of Nazi occupation is as deeply unsettling in real history as it is made in sagas of fictional domination of North America, compelling as they are. Watch this space.

You can go on Wikipedia and read how Norwegian saboteurs got into the Norsk Hydro plant and destroyed the Heavy Water facility. You can follow how the Germans made a Herculean effort to rebuild and how the saboteurs had to do it all again. That is fine, but this book gives you so much more, going beyond the basic facts of history to build a genuinely thrilling adventure beyond fiction. This is known history, making it into a cliff-hanger takes skill. Mr Bascomb has plenty of it. He balances all the elements and does his best to be unbiased and inclusive to the plot. The reader will always want to stay on side with the multiple layers and being able to put the book down will take discipline. Our heroes are heroic and the bad guys are nasty but without any cartoonish nonsense. This is all very serious stuff.

Imagine a world where the Nazis made an atomic bomb and used it. Where would we be now? Take yourself away to a wintry Norwegian wilderness and the group of men who did their bit to ensure it did not happen. Britain and Norway have strong ties. When I was a lad I remember King Olav spending occasional Saturday afternoons watching the Arsenal at Highbury and we still have the Norwegian Christmas tree donated every year in Trafalgar Square. Time fades the relevance of these things but perhaps this book will restore some of the importance the commuters who I pass on my way to work should attach to a few good men who may have saved their city and much, much more besides. This is the essential read for your summer. 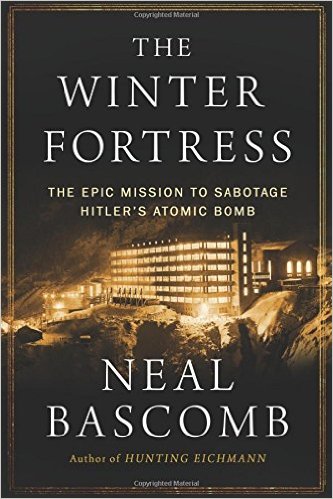