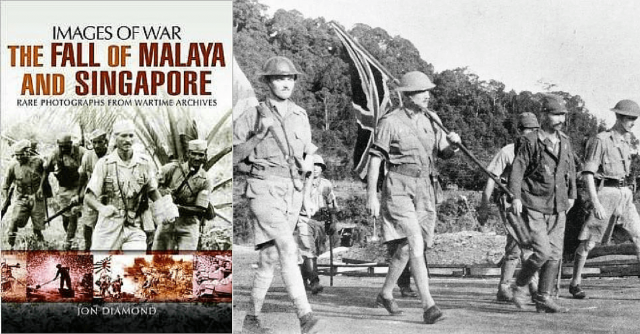 I had a bad experience with a book from this series before. I say bad, tasteless is probably a better description. I didn’t like one drop of the book or its content and I thought I’d warn you good readers about it before parting with your hard earned cash. After all that’s my job -to review books.

So when I took a new batch of books in from Pen & Sword and I saw the title I shuddered somewhat. Was this to be a reoccurring fixture with the Images of War series? Thankfully, not!

What I held here was a breath of fresh air and an author whose dedication and knowledge is clearly second to none.The book covers the conflict in the Far East, Malaya and Singapore to be precise, and tells us visually, warts ‘n’ all, about an often forgotten war. Author, Jon Diamond, takes us on a pictorial journey of what was basically a giant military cock up on the part of Great Britain and her allies. He tells us in just the right amount of words so as not to detract from the photographs about the build up and surrounding history of the conflict prior to the Japanese offensive.

This war was total and brutal on everyfront and although Diamond tells us sympathetically of the plight of those fighting the war and those civilians who were to suffer directly because of it he doesn’t shy away from pointing the finger of blame! It’s not a simple affair to cover by any means but with enough text and historical fact one can easily get to grips with the flow of the conflict and have a better understanding of the hardships faced not only by the Allies but also the Japanese army and that is this book’s trump card – it’s neutrality.

It isn’t written from a British or Commonwealth point of view or even from a Japanese angle. It’s written impartially and without side for Jon Diamond MD, a kidney specialist of all things, sits squarely on the fence as an American and yet he still manages to conjure up terrifying images with his use of text but above all gives us an overwhelming taste of war by his choice of images from both attacker and defender alike.

Expect many original and unseen photographs that will shock and appall but that will also educate. This was not a war between two European nations with similar religions or cultures but between two different worlds. The harsh treatment of POWs by the Japanese is well documented and here is no exception in photographic evidence. Their insistence in executing Sikh colonial troops for example is also included as is the disregard for civilian life so be warned that some photos are shocking. This isn’t a Hollywood airbrushed affair or a 1940s wet weekend ‘Home Front’ melee. This is the day-to-day, week on week, month-by-month hell of those unfortunate enough to be in the cauldron of 1940s East Asia as told in photographs.

Each image repays study tenfold and one doesn’t take long to be moved by right and wrong and to be swallowed up in a time still too soon for comfort. We judge and act as jury and executioner at Diamond’s chosen photographs as page after page of instant history, captured forever flash past out eyes.  All said and done war is war. There’s nothing noble about it or even heroic. WW2 in the Far East was total war.

The finger of blame, the war crimes the ifs and buts and whys and wherefores amount to little after so many deaths. Some would argue the biggest criminals in this theatre of death were the British generals inability to lead or to learn. The white jacketed, grinning Lord Mountbatten aside, everyone in this book appears to have loved and lost and suffered unthinkably and such is the author’s capability you suffer alongside them. It’s not often a book moves me to an emotional level or leaves me cross and angry but this title did both. For that, I’m actually grateful!Highly Recommended.

In memory of my great uncle 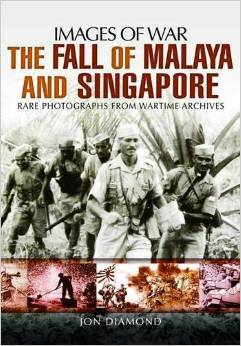 THE FALL OF MALAYA AND SINGAPORE
Images of War series
By Jon Diamond
Pen & Sword
ISBN: 1473845580