Regulars will know that I have a view on books like this one. To my mind, they can set themselves up for all manner of subjective criticism because of the very nature of their construct.  I genuinely don’t know how many forums there are out there devoted to military stuff, and I am acutely aware of the crossfire one can stroll into on social media – just look at the WHO Facebook page – so a book about tanks can excite all kinds of opinions.

The age-old problem for authors is deciding what to leave out. Tanks, themselves, are actually quite straightforward things. A bit like cars, they have their milestones – firsts and lasts, innovations and disasters.  They have come in all shapes and sizes and mounted a plethora of weapons. They have been built and operated in a vast range of countries and in just about all environments.  The author is quite correct to subhead his book ‘100 Years of the World’s Most Important Armored Vehicle’. The tank changed warfare and set in train a struggle of hearts and minds within the world of strategists and engineers on how to get the best out of it.

Naturally, the book is illustration driven, and I am really impressed with this element. We get bog standard images of tanks, as you would expect; but the author has also included details of ephemera and equipment and, crucially, examples of tanks in popular culture with film posters and suchlike. This makes so much sense when we consider the cult around Oddball and Moriarty, for example. The fact that the book attempts to connect with the world beyond just the military is such a plus for me.

I am as guilty as the next man when it comes to tanks and subjectivity. I like to see a lot on Little Willie and the Landships of Lincoln because they are the mother and father of tanks, and this cannot be ignored. The little Renault 17 is also very important because of its layout and after that, we can debate our socks off discussing the merits of what followed based on weaponry, propulsion, chassis and whatever you like. We can even argue over the best names if it floats your boat.

I have never been hooked on the primacy of the German tanks of World War II but will always favour the Panther, over engineered and mechanically fickle as it was. The great workhorses – Sherman, T34 and Panzer IV, are no-brainers. I have to admit much of my attraction to armour is about aesthetics, so I love all the French stuff because it is bonkers, and pretty much anything on a Christie chassis because they are usually sleek.

In the modern era, we have seen some pretty amazing stuff. Last spring I stood by a road as a regiment of Challenger IIs rumbled by. The awesome power of this tank is quite remarkable. I have never seen an M1 Abrams and feel trying to compare the two brings out all the invidiousness the tank debate engenders. Classic post-war armour is just as attractive to me, and I do love a Centurion or Chieftain and the Soviet stuff is fine. The M60 is a brute. The armour I would like to see up close is in Israel and as an aside the museum I long to visit is at Latrun – so a trip to combine a visit to the Holy Land with tanks is possibly on the cards.

I have waffled on again here, and this is deliberate. I stick by my contention that tanks and their history are just too subjective and open to nationalism, parochialism and many other isms. Mr Haskew has written a perfectly decent book on tank history. It looks good and really does the job. The design and layout is excellent. I think he has managed to be pretty balanced, and he is clearly a pukka enthusiast. The book has style, and it is quite substantial. These are all good reasons to consider it for your library.

I would imagine that as we close in on the centennial date of the introduction of tanks during the Battle of the Somme that there will be many other books on the life and times of tanks. I have read quite a few, already. The important thing for me is to be entertained, and Mr Haskew had definitely done that. So, consider this one an above average start to a busy year of armour in print. 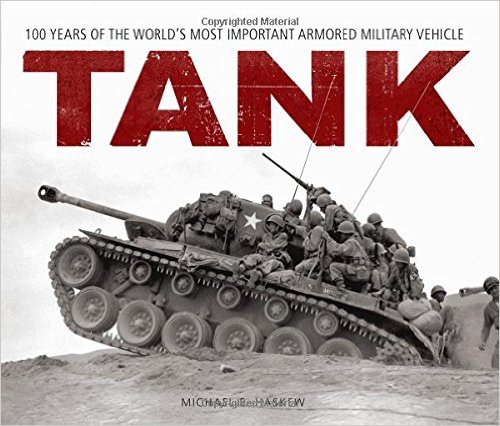 TANK
100 Years of the World’s Most Important Armored Vehicle