I’m not one for getting mired in statistics or arguments over the biggest this and the greatest that.

The naval clashes of the 20th century are all meat and drink to me and I am more than happy to broaden my horizons away from the “home” waters and the likes of Jutland in 1916 or the Denmark Strait in 1941 to take in the sheer scale of Leyte Gulf in 1944.

Up until this point I had read several accounts of the disaster that befell Force Z in 1941 and Tora! Tora! Tora! remains a much-loved movie, although I have never read a solid narrative of Pearl Harbor and would welcome recommendations.

I reviewed a fantastic little book on the Battle of the Java Sea only recently and, now, I am pleased to have received this first-rate account of a dramatic segment of Leyte Gulf by Byron G Como.

The author tells the story of how Admiral Takeo Kurita’s Centre Force, a fleet of battleships including the giant Yamato, cruisers and their escorts surprised Admiral Sprague’s Taffy 3, a unit of small escort carriers and their few escort ships.

The Japanese had hoped to attack easy targets having used their few remaining carriers as bate to lure American capital ships.

Kurita’s tactic might have proved disastrous had his force encountered unprotected fleet carriers, but instead it was the ponderous sweatboxes of Taffy 3 that appeared out of the squally weather.

We are taken through phases of the encounter at a breathless pace. Mr Como is a stickler for detail, but he doesn’t get bogged down in it.

Descriptions of the tactics, ships and the men involved are more than equal to some of the best-known authors I could name. His enthusiasm for subject shines through. The analysis is balanced and in no way gung-ho.

The attack on Taffy 3 is like many naval battles where confusion often reigns. The weather, tardy communications and misunderstandings all play their part.

There seems little doubt that, with a fair wind, Kurita’s force might have Inflicted untold slaughter on the Americans; but the defence was dogged and although sacrifices had to be made, the end result was not the great victory Japanese fortunes demanded.

The heroics of the escort ships, Johnston, Hoel, Samuel B Roberts and Heerman offer eye watering reading at times. The fate of the Johnston and the tragic loss of her captain Ernest E Evans are particularly stirring.

Evans was awarded a posthumous Medal of Honour for his brilliance. The author describes the heroics of the outnumbered and outgunned American ships as they made a determined effort to shield the diminutive escort carriers from attack.

Despite their best efforts, both St Lo and Gambier Bay were lost, the former as a result of a kamikaze strike. It was the first time the concerted use of suicide attacks by aircraft was encountered.

Other American ships were hit hard, but it wasn’t all one-way traffic, the Japanese paid a heavy price for Kurita’s attack. The story of the destruction of all these ships is as visceral as it is dramatic.

The author takes us through the labyrinth of the American response as waves of aircraft strike back at the enemy.

Three heavy cruisers were sunk while three more were severely damaged. The mighty Yamato makes a number of appearances in our story, dodging torpedo strikes with relative ease while joining in the bombardment of American ships.

The author goes to great lengths to discuss the superiority of Japanese torpedoes and the quality of the crews trained to use them.

This all adds credibility to a book that recognises the professionalism and valour of Japanese sailors involved in the battle.

A word should also be said honouring the valour of the American airmen taking on the Japanese ships and aircraft. Their heroic add even more to an incredible battle.

This is a self-published book and I can’t help thinking it might easily have been picked up by a major publisher. What difference that would make to the product is a moot point.

Mr Como is a decent writer who knows his stuff. His own maps and illustrations add to the mix and I’m not convinced a wad of glossy photos that might have been found in an expensively produced volume would have done much to enhance the book.

What I would like is to see similarly detailed accounts of the other phases of Leyte Gulf and, while I am at it, an account of the Battle of the Philippine Sea has great appeal.

Accounts of naval battles offer the best of action packed and intense histories and this superb book does all this in spades. I really can’t recommend it highly enough. 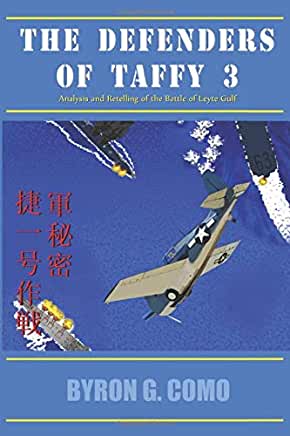 THE DEFENDERS OF TAFFY 3
Analysis and Retelling of the Battle of Leyte Gulf
By Byron G Como
On Demand edition available from Amazon
ISBN: 978 1 07594 637 0