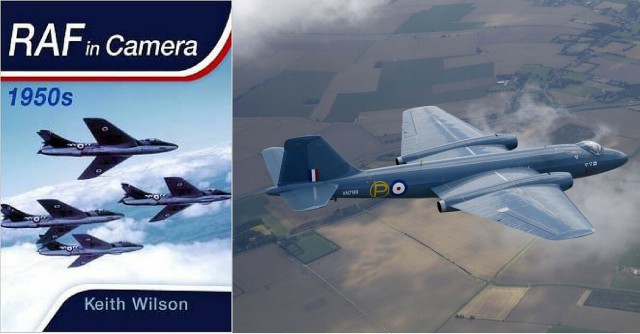 Earlier in the year I was happy to see an Images of War series book about the RAF in the Cold War. That book had quality and vision all over it and it remains one of the best in the series.  Another book we saw at the start of 2015 was a photographic essay on the BAE Hawk. Both these books represent what appears to be something of a game changing progression with aviation books at Pen & Sword. Books like these are not cheap to make and take a lot of work. Believe me I know how hard it is to produce a photographic history. It’s easy isn’t it? You just look through a few snaps and pick out the best or most interesting. Simples, right? …Er, no. It is not as easy as it looks.

That Keith Wilson makes it look so easy with this fantastic book is just smoke and mirrors.  The fact that the photos themselves are so good actually makes the job harder. What the hell do you leave out?

In this volume Mr Wilson concentrates predominantly on the aircraft and this, after all, is where much of the nostalgia fuelled dewy-eyed feelings come from to make a book like this work.  The Exchequer throttled the RAF of the 1950s while it was trying to keep abreast of new sciences. On the one hand it was using venerable weapons from past conflicts while struggling to introduce imaginative new kit on the other. Austerity was the order of the day and nothing much has changed there.  So a book like this will give you Spitfires and Sunderland flying boats in the same breath as the Canberra and V-Bombers.

There is something ironic that this year saw the final flights of the majestic Avro Vulcan. Here you will see it arriving in service. I had the honour of meeting a gentleman involved in that programme and his recollections are awe inspiring. Images of the 1953 Coronation Review with what appear to be more planes on show in one snap than the entire RAF of today are pretty spectacular.

This is a lovely book. It is crisp and clean to look at and the photo reproduction is first rate. The captions are clear and easy to follow and this is essential if it is to appeal to people who remember those days of thunder or have affection for those times. I was born in 1959, so I don’t know where I fit in, but so many aircraft of the 1950s were still in service in my childhood it seems that the decades merge together. I am keen to see the next volume on the 1960s and hope we will see the 70s as well. Five stars.