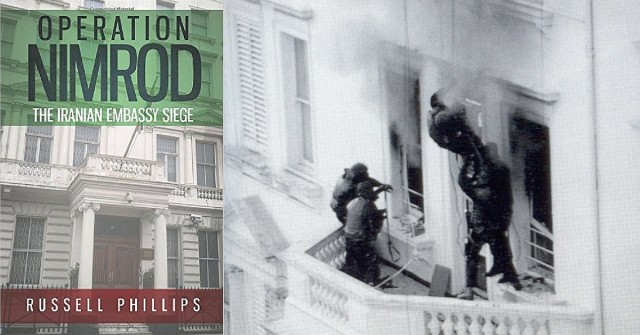 In the first week of May 1980 the Special Air Service was propelled into the limelight when men from the regiment ended the Iranian Embassy siege in London in ruthlessly efficient style on live TV. From that day on the regiment became the darling of the British tabloid press. I am writing this on the day of the tragic events in Brussels and I will bet you hard cash some of Britain’s newspapers will carry stories about the SAS patrolling London in their coverage tomorrow morning.

Whether they are or not isn’t the point, for that dramatic day in May thirty-six years ago pretty much defines the regiment in the eyes of many; more than anything the legends of 39-45 achieved and even more so than the heroes of the first Gulf War.  Images of the men in black abseiling down to kill the terrorists have become iconic.

But of course, there is a wider story than just the drama of the 5th of May. The siege had gone on a week and it was big news. The chaos in Iran where Americans were still held hostage achieved heightened interest when a small band of budding separatists walked into the Embassy in Princes Gate and began the drama that would cost them their lives and make legends of others.

This book by Russell Phillips offers a succinct and straightforward look at events, telling the story in calmly neutral tones. There are no pictures and very little ceremony. This is no-nonsense stuff and it cracks along with gusto. I managed to finish it in the space of a commute in and out of London today and I am genuinely impressed with the quality of prose and information. Mr Phillips offers a no frills fact-filled account while keeping the emotional stuff to a minimum.

The siege had lasted a week before the hostage-takers began to see their plans unravel. They shot one of their captives and it looked like there would be more deaths. It was at this juncture that Operation Nimrod was launched. I well remember the television coverage of the assault and then the ebullience of Britain’s Home Secretary Willie Whitelaw who made it clear there was no messing with us Brits.

The ending of the siege helped bolster pride in the armed forces and it sent a message to anyone thinking of doing something similar. The British Isles at that time was enduring a conflict of it’s own and the SAS would go on to play a number of dramatic roles in the saga. But that evening in May 1980 gave them a moment in the sun – their fifteen minutes of fame – and in truth the halo has never faded whether everyone likes it or not.

Jack and Joris often say my reviews are an excuse for me to chuck in a few anecdotes before finally offering a couple of lines on whatever book I am discussing.  Happily this one will be no different and this time I can quote from a ‘book’ of my own – the diary I kept in 1980.

Thursday, 1st May. “In the evening I discovered my camera has a fault. Mike and I went to the Iranian embassy siege to take pix – but I couldn’t due to my camera. [We] managed to get inside the police cordon – it was great fun.”

Mike was a childhood friend with whom I learned the photography trade. We had a darkroom and did a bit of commercial printing for extra cash. We covered motor sports events and dreamed of being professionals. We were twenty years old. I remember that night at Princes Gate quite well. We drove up to Kensington and as I sat in the car – a Triumph TR7 (!) – I was winding on a new film in my camera when there was a metallic ping…. Something had snapped in the winding mechanism and that was that.

So I stuck a long lens on my useless camera and we walked down through the cordon and stood in what Mr Phillips describes as Pressville. The cop who let us pass didn’t ask for press ID and the long lenses did the trick. Mike snapped pro and anti-Khomeini demonstrators bickering in the road and he took a couple of views of the distant embassy building and that was that. I pretended to do much the same. We knew when to call it quits.  As we walked back to the car we were tickled pink by what we had got away with.

Imagine it happening today! We agreed we would try again if the siege was still going on the following Monday, but something came up and we never returned.  I often wonder what we would have done had we been there on that dramatic Monday in 1980. The rest of my diary entry for the 1st of May was more concerned with Arsenal beating Liverpool to reach the FA Cup Final.

Tidy books like this one from Russell Phillips invoke memories of another time. He tells the story well and the book doesn’t go off piste into the nonsense of unnecessary dramatics or conjecture. He simply tells it as it was.

The siege is not a happy story because people died. But it allows me to smile and remember a naïve young bloke thinking he was a bit cooler than he really was. Arsenal lost the Cup Final to West Ham United and I was there for the disaster. 1980 was obviously a busy year.  If you want a fast paced and unpretentious account of the siege then this book is for you.  Recommended.