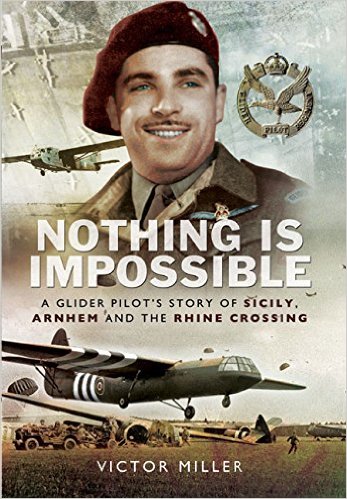 If there is anyone in your life whose story you cherish then getting them to write it down or record it is one of those things you will not regret. Some of the best history books are built on these sort of recollections and I have three books about the work of glider pilots that have one thing in common – they are graced by the memories of Victor ‘Dusty’ Miller.

Some time after he passed away in 1997 Victor’s family began working on his personal memoir that had been published previously in a more concise form than this epic reworking.  Rest assured their efforts have been vindicated because as personal accounts go this is an absolute beauty.

Victor was an infantry soldier who volunteered to be a glider pilot. Like all of them he had to learn to fly a powered aircraft first before concentrating on his chosen craft. Mr Miller flew into Sicily, Arnhem and over the Rhine and you really cannot knock his courage, because the first two were agony for the Glider Pilot Regiment and the book reminds us that with a forty per cent casualty rate, the regiment suffered more than any other during the war.

Victor was one of those gifted men who although never rewarded with a university education he developed a writing style that reveals an eloquence and attention to detail a good many professional writers could use.  He had that old soldier’s knack of finding the words to describe often the worst of scenes but he always found room for that irrepressible sense of irreverence we see from veteran soldiers the world over.

Through his two gems recounting the work of glider pilots in Sicily and at Arnhem, Mike Peters tells us about the concept of the total soldier. British glider pilots were trained to be combat troops as well as sky chauffeurs and at the end of this amazing book we find Victor the trained sniper hunting down Germans during Operation Varsity.

But it is Market-Garden that dominates this story and Victor’s immensely readable account of the disaster is possibly one the best you’ll ever read. His story of life around the Hartenstein and the Cauldron of Oosterbeek has been food and drink to better known historians. At the end of this wonderful book we learn how important Victor’s original unpublished manuscript was to Cornelius Ryan during the writing of A Bridge Too Far and, indeed, Victor has several mentions in the old classic. I pulled out my 1974 first edition to read his entries and came to appreciate that several of the best known passages from the book owe a lot to the recollections of Victor ‘Dusty’ Miller.

I have to say this book is an essential read for anyone interested in airborne operations first and foremost, but also to people who appreciate unvarnished and authentic history from the people who lived it. Victor Miller was a soldier, a pilot, a great writer, an accomplished artist and a dedicated family man.  This outstanding book is his monument. I will cherish it and so should you.

NOTHING IS IMPOSSIBLE
A Glider Pilot’s Story of Sicily, Arnhem and the Rhine Crossing
By Victor Miller
Pen & Sword Military
ISBN: 978 1 47384 366 0