The ‘to do’ pile in the Reviews Editor’s man-cave at WHO Towers is in danger of toppling, so it seems like a good time to catch up on a number of titles I’ve been browsing during rare moments of free time.  The summer can be either a bit quiet or too busy for concentrated book reviewing. I do nearly all my reading on a commuter train to and from London and I tend to save photo archive books for the quiet of my sofa. There hasn’t been a lot of quiet this summer with one thing and another.

I’ve said it repeatedly – I like this series of books from Pen & Sword very much. They can be a bit mixed at times but the overall impact of their value and accessibility for budding historians is not to be ignored. These books are cheap and cheerful in the nicest sense and a younger me would have loved them. The older me sees a lot of books and I am always pleased to see that when these Images of War titles are good, they are very good. They are not everyone’s cup of tea, but books; like music, beer, and football offer a wide range of names to support and dislike in equal measure for myriad reasons. One man’s meat is another man’s poison. 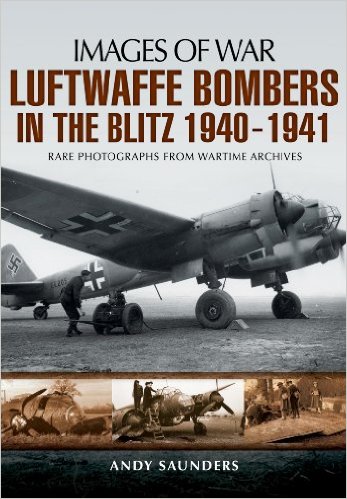 LUFTWAFFE BOMBERS IN THE BLITZ 1940-41 by Andy Saunders is a great read from first to last. There is no messing here, the thing comes without too much superfluous chatter allowing Mr Saunders to do what he does best – providing in depth and absorbing captions in the kind of bite size portions we can all manage.

His professionalism is something for others to aspire to and his knowledge and passion combine to make books like this a joy. The subject matter here is all as per the title and it really works.  There is a lot going on with views of bomber crashes, interesting people, Blitz scenes and other details. We get excellent pictures combined with quality captions. Some of the images are well known but the majority are sufficiently diverting for me to want to keep this book in my library. Top marks.

THE FEW Fight For The Skies 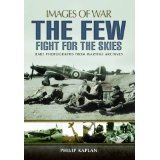 THE FEW Fight For The Skies by Philip Kaplan arrives in perfect time for the 75th anniversary of the Battle of Britain. It is inevitable that this major battle would attract a forest floor of books during recent months. Mr Kaplan is a prolific and engaging writer. His style of books in this range is much more wordy than Andy Saunders but the prose all works. There is plenty to enjoy and learn from. I like his style. The images combine photography and artwork including many of the wonderful pilot portraits made by Cuthbert Orde. No Battle of Britain book is really home without one, and here Mr Kaplan brings us a sheaf of them. This is all to the good. As ever, there are a few well-known shots to befuddle the range’s stock strap line; but this does not detract. The Battle of Britain will be refought forever in print and while there is a point to the books I am more than happy to see them.

GERMAN ARMY ON THE EASTERN FRONT – THE ADVANCE

GERMAN ARMY ON THE EASTERN FRONT – THE ADVANCE is another gem from Ian Baxter an acknowledged devotee of German WW2 photographs who we have seen a few times in Reviewsland.  None of his books in this series have disappointed me and I admire the way he treats all aspects of the Nazi military juggernaut with such even-handedness. Best of all he allows the pictures to do the talking and, like Andy Saunders, he goes in for excellent captions as opposed to producing a conventional narrative. The images are, as ever, stunning. I am not expert enough to say whether they are rare or unseen but I can tell you this is another gem that will not be straying from my library. 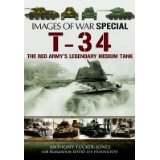 T-34 The Red Army’s Legendary Tank is from the Special range in this series. Author Tucker-Jones is as prolific as the gentlemen we have seen already and this time round he turns his attention to the Soviet classic everyone loves. I can wax lyrical about the T-34 until the cows come home. I don’t pretend to be a big expert on it (or anything for that matter!) but, along with the Sherman, it is a tank that puts a smile on my face. If you find that weird you are visiting the wrong website. What we have here is a straightforward history of the T-34 and it’s many variants and you cannot really go wrong with this package.  The archive photography is excellent while the additional colour photography and artwork by David Lee Hemingway all work. For less than fifteen quid you really are getting a good deal with this one. 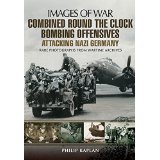 COMBINED ROUND THE CLOCK BOMBING OFFENSIVES Attacking Nazi Germany is another title from Philip Kaplan. There is a lot going on here – the usual mix of well-paced text and interesting photographs fill a busy book. The author has to find a balance between the RAF and USAAF and I think he just about manages it. The fact is the USAAF lent themselves to much more photography by dint of their daylight operations and the RAF were less well represented. I know this from my day job in a newspaper archive where visits to 8th and 9th AF bases seemed to be much more common than those of the RAF even though propaganda was essential. There are a number of images that a far from ‘rare’ in this book and we also see scenes from The Dambusters and The War Lover that are representative in their own way but I am not sure they work here even though I do love cultural references mingling with my history. However, this is another solid piece of work and there is more than enough to keep me interested.

Hopefully you will have found something in this little lot to float your boat. I have yet more from this series to look at and will report back in due course.