Lots of us have heroes when we are young and some people keep them all their lives. There are regional variations, so, when I was a younger me, most of my heroes were soccer players, racing drivers and guitar legends. Born at the tail end of the fifties I was probably a bit late for the era when heroes were often warriors, record breakers and adventurers; but they all had their place as the days of empire and achievement receded.

I have plenty of time for war heroes. They come in all shapes and sizes and are not exclusive to my own nationality. They can be loud and the stuff of movies, or the quiet types who had their remarkable fifteen minutes and slipped away to recover their real worlds. We accept fighter jocks, astronauts and centre forwards as heroic, but what about writers? How many people can actually say they think of any as such? Not me, if I am honest; but when I was around fourteen the writer I wanted to be was Cornelius Ryan. The fact is I hadn’t read much else at that age and by the time I was twenty-one I thought it would be cool to be Frederick Forsyth or even a bit like Spike Milligan, two very different people whose fiction I admire but tend to ignore in favour of real life history.

This genuinely pleasing book edited by Robert Deis and Wyatt Doyle is filled with heroes, not least the main subject, Robert F Dorr. He is man we used to say had ink in his veins in the lost world of the newspaper industry and he takes time to explain his ‘journey’ as a writer before we enjoy a selection of the magazine articles he wrote in the distant 1960s. His account of how he came to be a jobbing writer and then a full time author is fascinating and an education for budding scribes today, even though the media world is much changed.

I don’t remember reading any of Mr Dorr’s books and although I knew of him, I had no knowledge of his career. But on reading this compendium of work he did at a time when I was a little lad; it is clear he is an excellent writer. In his story he comes across as honest and enthusiastic even in later life when the state of his health is a trial. He paints a classic picture of the young writer hunched over a typewriter living on a diet of coffee, tobacco and booze to charge his batteries. He hammers out his tales to suit a range of markets and like any good writer he can make something of just about anything. He likes facts and heroes, but he also knows the old truth that bullshit baffles brains. He does what it takes to get a cheque in the post and is at peace with what he does.

When you read his sagas of pilots, pirates and adventurers you can see real craft. Some people are born writers and others really have to work at it. Whichever they are, both types have to keep practicing. It usually makes perfect. Mr Dorr’s 1960s style really appeals to me. I did a writing course with a publisher when I was twenty-one and the man at the front always told us the important thing was economy. Learn your language and don’t hang on flowery prose. Why use twelve words to describe something you can do with seven better ones? I have always liked this style and while I suppose it is associated with pulp fiction and breathless tabloid journalism; it can be masterful.

Mr Dorr knows the style of what he was writing, quite apart from the subject matter; is now something of the past. We have moved on. But the editors realise we can still enjoy it for what it is. There are some great stories here and Mr Dorr is correct to advise us to keep tongues firmly in our cheeks as we rattle through them.

The era these stories come from is and isn’t a million miles from where we are now. Magazines proliferate. Some survive. Others have shifted on to the ether, not unlike War History Online did after print proved cumbersome and costly. It all goes back to the chap teaching me in 1980. Economy rules. The titles Mr Dorr wrote for are of another age as the artwork and designs reveal. A pleasure of this book is being able to see how they presented his work at a time when boundaries were being pushed, if not shoved; as risqué imagery and taboo busting language became more general. It was brash and colourful in a period just before most men’s mags became the sort of thing our dads hid in the garage.

Mr Dorr is a prolific writer doing serious histories and his work of fifty years ago may seem a tad arcane or even cartoonish. You will find recognisable flashes of Quentin Tarantino or a Hildy Johnson character and this reflects a history of modern American writing in all its forms. Honesty time again when I admit to not knowing much about the names Mr Dorr says inspired him. Perhaps that goes back to times and places; a bit like the picture card heroes of our choice.

It’s fine to admire people for their achievements and writers should be included in this. Be inspired. This book might help you do just that. It is great fun. It doesn’t pretend to be something it isn’t. Feet are firmly on the ground. It puts a smile on your face and that is enough for me. 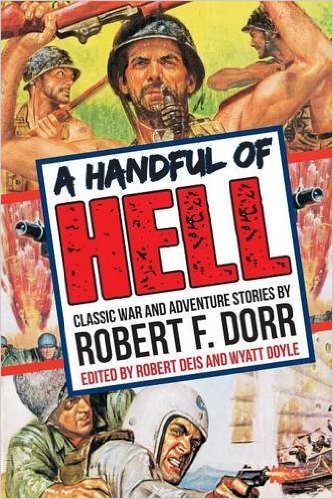