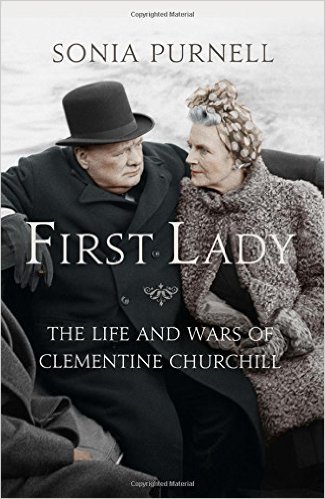 Despite not being a massive fan of Winston Churchill in consideration of his whole political career, it is impossible not to admire his resolute belief that the Nazis would be a grave danger and that they would have to be dealt with. There are so many books about the man; if we are going to learn about him the problem is knowing where to start.

I’ve reviewed other books about him for WHO and regret giving one of them away. I find it a little ironic that along with Monty, I have more books on men I admire less than on some others I have a lot of time for, but that’s where we are.

This book is about Churchill, but it comes at him from a different perspective by offering a stimulating biography of the single most important person in his life, his wife Clementine.  She enjoyed an entry into the most dramatic moments in 20th Century history, met many of the major players and defended and supported her husband through some truly difficult times. They were a true partnership and she shines through as genuinely remarkable and not a little wonderful.

So, why for a military history website do we need to consider a biography of a politician’s wife? Well, Churchill was not just any politician, as we all know. He is an icon of the 20th Century. I remember his funeral being a massive event when I was just a little boy and recall the dim grey television coverage on the set rarely switched on in the home of an elderly couple who cared for me a lot of the time and who considered him to be something of a deity – a saviour.

It would be easy to just talk about Winston, but this books recounts the life of Clementine, where we learn her name was pronounced ending in teen, not time.

More seriously we get a look at the stiff and wholly unpleasant Victorian and Edwardian world where a lot of the things that are as plain as day in our modern uninhibited world, were things that crushed even the best of blood lines a century ago. He father was a waster and an aggressive cad, and Clementine did not have a very happy young life, which seem to have been decreed by a class of people who thought it was normal for children to suffer. True connection with her mother was impossible and we see that with her own children the kind of bond we all wish for was just not there much of the time. They may have been superior beings with the right family tree, education and wealth, but a lot of those exalted people were really poor human beings, in my opinion, and digging a way out of that rut was not easy.

Winston Churchill was an ambitious and often cash strapped politician with the habit of backing the wrong horse and really peeing off his peers. So they were happy to let him take all the flak for the disaster at Gallipoli and it genuinely haunted him. But it didn’t stop his obsessive armchair militarism from getting the better of him in World War II. It is stunning how both he and Hitler had notions they were both military geniuses who knew better than the professionals and their dictatorial styles explain a lot about how the course of the war played out. Clementine was there to watch her husband fight for what he believed in and then bully and cajole the people who were not with the program.

She had her moments of doubts about him, but when she was on side heaven help the lesser men who had thwarted him, none more so than the vicious encounters he went through during the disaster of appeasement. It is stunning to read just how unpleasant that was during a time when he was branded a warmonger. The same men had to come back to him when all his fears and predictions were proved right in 1939. Clementine was there to remind them of their folly.

As mentioned before, I spend my days working in a photographic archive and some years ago one of a dying era of newsmen retired and handed me a set of colour transparencies of Churchill he had kept in his desk since the 1960s. It showed the great man frail and old, clearly in his final stages of life returning to Britain from a holiday where he had been ill and there beside him is Clementine, still looking fantastic, but I suppose it is easy to detect the look of realisation on her face that time was running out for him. They are a very sad set of images.

I was going to start this review by referencing that pop song that reminds us of the outmoded saying that ‘behind every great man is a great woman’. Times have moved on and it is wholly accurate to say that Clementine Churchill was actually a great woman in her own right, championing the cause of women’s suffrage and the need for greater social care for the working classes, often in the face of her husband’s hostility. It was Churchill’s detachment from the people who actually did the building, fighting and dying in the wars that thrilled him that makes the man such a difficult subject for me.

Clementine did her best to give him a human side, but he was always happier with his maps and grand schemes than dealing with the harsher realities of his world and how they impacted on the man in the street. His brand of imperialism and racial supremacy is long since gone from our modern world. But he was of his time and staunch in his determination that the sun would never set on the empire that made him. Fighting and surviving two world wars broke the empire forever but his leadership through it’s greatest trial was his finest hour. He was very lucky to have with him an amazing woman who was more than just an appendage. Shewas his equal and the source of his strength and he knew it.

Sonia Purnell has written an absorbing account of the life of a woman who was propelled into the decisive events of her century.  This isn’t a military book, but if we are going to develop a strong understanding of the people and events that bring us to places like War History Online then getting the bigger picture includes the lives of those who, at first glance, were just witnesses to history.

Clementine Churchill was much more than just an observer or a footnote, as this admirable biography shows. I won’t make the mistake of giving this book away.