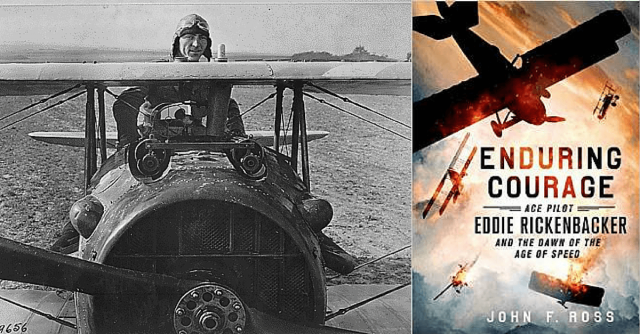 Even without his place in aviation history, Eddie Rickenbacker had a remarkable life as an automotive engineer and racing driver. From the outset, the author of this entertaining biography embarks on a triumphalism for the American spirit inasmuch as he directs the reader to a time when the USA was making rapid progress as a land of immense opportunity in the age of a burgeoning spirit of nationalistic pride.  America was slipping the chains of its largely European heritage to promote its own identity and that men like Rickenbacker, the son of Swiss immigrants, could make a place for themselves against all manner of odds, fits perfectly into that imagery.

Our Eddie seems a little typical in some ways. His family were far from affluent and following his father’s violent death he had to abandon education to make ends meet. He was clearly a natural when it came to mechanics and engineering and he managed to progress in an expanding automotive industry despite his young age. On the track he was fearless but always disciplined. Mr Ross’ account of his racing career makes for entertaining reading. The lethality of motor racing in that era created a kind of person we see so few of today. There was an ingenuity to Rickenbacker that would have made him stand out wherever he came from. He was a prime example of someone who although lacking in formal education could pretty much turn his hand to anything he wanted to do.

The author celebrates his can do spirit. There really was no messing with Eddie Rickenbacker. His determination to succeed is inspirational, while his pragmatism – changing the spelling of his surname and adding a middle name to give him more class, show he was a man who was a survivor who knew how to manipulate things to his advantage.

And still we have the Great War where Rickenbacker found a celebrity status he carried to his grave. Here again he came up against obstacles on his way to becoming a fighter pilot.  His education and background might have held him back but he found his way past all the obstacles to become America’s great ace of the war.

America joined the conflict at a time when the Allies were at the limit of their resources and the ebb and flow of the air war would make victims of both the elite and the greenest rookies during 1918. Three of the greatest aces, McCudden, Mannock and the Red Baron himself would all perish in the final year of the war. The Americans had little time to acclimatise to the violent intensity of it all and this makes Rickenbacker’s total of twenty-six victories seem all the more impressive.

But there was still much more to the man and he powered through the twenties and thirties developing airlines and running the Indianapolis Motor Speedway amongst other achievements. His reputation for having nine lives saw him survive disasters and come out fighting, none more so than his ordeal adrift in the Pacific Ocean after the B-17 he was travelling went off course and ditched when it ran out of fuel during World War II.

Rickenbacker, the no nonsense motor racing driver, fighter ace, Medal of Honor recipient and successful business man died in 1973 when he was eighty-two years old. He had survived all manner of scrapes and shrugged them all off to become a legend.

Mr Ross’ book is a fast paced and easy read brimming with enthusiasm for the America he writes about. It is quite infectious and I really like the positivity of it all. It seems to me that the style of writing and national pride on show would appeal largely to a home audience, but this is a solid account of one of the greats of the 20th century, wherever you read it. I have to say I was more enthralled by the imagery of pioneer motor racing Mr Ross draws for us than the Great War element. But don’t take this as a criticism.  I love the way he introduces the reader to so many interesting characters from Rickenbacker’s life.

If you’re heading for an airport departure lounge and need a good read to see you through your days on a sunbed in Cancun or on the dunes at Camber Sands this really is a quality option. Accessible and vivid history knocks spots off imaginary worlds and you will be more than satisfied with this account of the very real and quite remarkable Edward Vernon Rickenbacker. 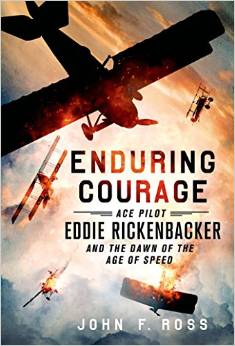