This book remains the essential single edition battlefield guide to the Western Front. It is now in it’s fourteenth edition and is much expanded on the original that dates back to 1976. I do not have one of those and in fact my first is from a relatively recent 2003.  Even at that point the book was only in black and white and ran to a hundred and seventy six pages. The latest has added a further seventy-four and is now largely in colour. As with other recent After The Battle works, the use of Google satellite imagery is pretty much standard. So much for the mathematics, what about the history?

Before Endeavours Fade was conceived and written by Rose Coombs, a lady who worked at the Imperial War Museum in London. I have met people who knew her and the general impression is left of someone who could be pretty direct and who was immensely passionate about the Great War. She was on a mission, a pilgrimage in truth, to see the Western Front and leave her mark on the telling of it’s story. There were no large guides and the pilgrim would be greatly assisted by a book that made it all easier to find. She succeeded.

The original book comes from a time when interest in the war was niche, to say the least, when it was possible to visit hugely important locations where there were no fences or interpretation boards and other spots where the debris of the war was still very apparent.  I have met people who remembered cycling around the Somme during the early 1970s picking up helmets and kit abandoned half a century before. Now this stuff is gold dust and while I am no field walker or souvenir hunter, it is always amazing to see relics – even if they are occasionally live and dangerous. When you first visit the Western Front, the temptation to bring home bits of Iron Harvest, or whatever, is intense and I did it. Now the two or three pig iron shrapnel shells I hauled back to Essex are in my garden shed.  Rusty fuse heads I found at Auchonvillers are on the window ledge in my office. The grenades and live stuff I encountered are just photos in my archive. They are best left well alone.  Shrapnel balls and spent bullets are less easy to spot and anything more personal has proven elusive to my friends and I. We always look in spare moments but these vestiges of the war are not our motivation for going.

Rose Coombs’ pilgrimage was about the people who fought the war and their experiences. It was about how their generation chose to remember and to show us what remained of them literally before endeavours faded away.  She might not have guessed that the battlefields would be gradually converted from slightly mysterious places to those on an established tourist trail. No one can deny local communities from cashing in on their history, nor can we doubt the need to conserve the history by limiting access. My friend John remembers when his kids could run and play in the craters of one well-known battlefield now stoutly fenced off from wandering feet. Even in my time I have seen things change markedly at some sites with a proliferation of visitor centres and a need for having someone interpret the battlefields for us. This latter element really pisses me off but it is a feature of modern life. The upside is having more places to stay or stop and get a bight to eat. As things become more tourism driven they invite the casual visitor – what the guys at one Somme location call the ‘Tea and a wee brigade’. Pilgrims come in all shapes and sizes with different motivations. The important thing is that they come at all.

Battlefields cannot stand still. They are usually on agricultural land and in France, especially, the farmland is almost always used and cherished. Just because these places meant one thing for a few years a century ago, there were countless other decades when the fields and copses meant something more besides. They were alive before the war and became so again afterwards. Battlefields are living things.  Villages grow and modernise. New monuments are placed. Roads widen. It all happens.  This is all reflected upon in this latest edition of the guide. Karel Margry and Winston Ramsey know as well as anyone that guides tend to be out of date very soon after they appear. But the publishers keep pace with things as best they can. It pays to leave things for a few years and then return to update us.

By the time you read this, the final preparations will have been completed for my trip to Verdun with my mates.  There are specific guides for sections of this particular battlefield and they are superb, but the book we are discussing here finds room for all of it from the English Channel to the Swiss frontier. It sets you thinking of places to see and stories you want to learn. Amass these guides, old and new, and absorb all the information you can get.   You may be thousands of miles from these places and assess them as being out of reach. Books like this bring them to you. Perhaps they will make a visit much more important, more relevant, to you.

No one can claim to have seen all the battlefields of the Western Front because of near constant changes taking place. Time doesn’t stand still. In Rose Coombs’ era the pace was much slower. In recent years we have seen the activity at Fromelles and changes everywhere along the old front line.  The lost are still found and features of the battlefields reappear. This book retains all the spirit of the original black and white format and is necessarily bigger because there is much more to tell us about. I like to think Rose would approve.  Our history should not be mysterious or off limits in some way as if it is only the province of academics or anoraks. Books like this help make it accessible. When I read my ‘old’ 2003 edition, I looked at the photographs repeatedly saying to myself “I want to go there.”  This new edition does exactly the same thing.

Happily times have changed in one way and this is ensuring the endeavours Rose cared about do not fade. They have found a new currency and whether it lasts the period of centennial hype or not, the Great War has not left our conscious. People like Rose Coombs did this for us. This new edition of the work she started keeps the faith strong.  It will always be a work in progress, but that is half the magic. Enjoy. 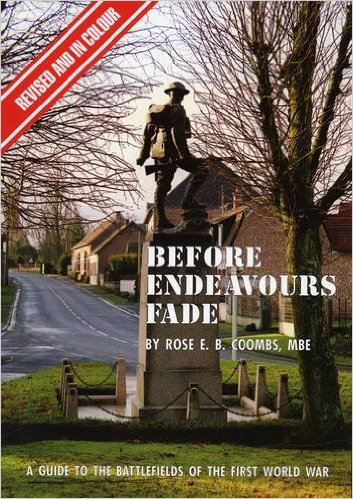