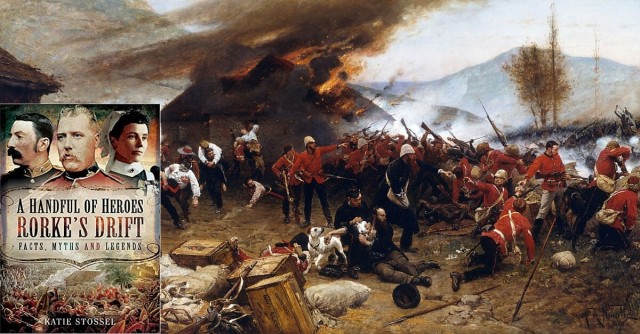 I doubt there are many visitors to WHO Towers who aren’t fans of classic war movies. The great era for them has long since passed and unlike during the 1950s and 1960s when such movies came along one after the other, we have to wait for occasional treats to delight us. Of course not all movies are classics but one that is almost legendry is Cy Endfield’s Zulu the epic story of the siege at Rorke’s Drift in 1879. It has achieved something of a mythical status, perhaps because the plot of the movie has become enmeshed with historical fact. As with most movie treatments it tells a version of true events and is far from definitive.

Films are entertainment after all. I am sure everyone reading this can make lists of movies with similar attitudes to accuracy. Television is just as guilty. A number of esteemed academics have had cause to groan when students have referred to the cult BBC comedy Blackadder Goes Forth as a historical source for their degree courses covering World War I.

Regardless of its loose commitment to the truth, Zulu is a copper plated classic of Victorian era warfare where a thin red line of stoic Tommy Atkins characters stand up to wave after wave of vicious ‘natives’. The film has enhanced both the mythical nature of Rorke’s Drift while continuing to lionise the British defenders and crucially the Zulus, for whom their remains immense admiration as disciplined and valorous fighters.

The actual events of January 1879 are bewildering in themselves. Local political and military colonial figures precipitated a war with a friendly neighbour for short-term goals and hoped for a swift victory before the men in London became aware of what they were up to. Unfortunately the senior military man, Lord Chelmsford, was guilty of a sequence of staggering mistakes and the losers in this were a large part of his invasion force left oblivious to their peril at Isandlwana.

At Isanlwana, some thirty thousand Zulus attacked theircamp on the morning of 22nd January 1879. The Zulus bravery in the face of the British volley can never be underestimated, but the great majority of over 1,500 men who stood their ground showed that awesome spirit of the British regular and fought to the death. Relatively few escaped and many of them faced discomfiting scrutiny from their peers. The majority tried and died.

The image of redcoats standing shoulder-to-shoulder loosing off volleys from their Martini Henry rifles is a popular one. But the horrible truth is those men stood some feet apart and only got off three full volleys before they were overwhelmed. The Martini Henry rifle has a fearsome kick and created a wall of smoke the Zulus used as cover in their approach. I have had the pleasure of firing one and it is a brutal weapon but the experience will live with me forever. None of us who shot with the rifle at Bisley could resist thinking of the classic misquote from the movie; “Zulus! Fahsends of ‘em!” Such is the power of cinema.

Lord Chelsmford and his cronies sought others to blame for their folly and were assisted, by the stand at Rorke’s Drift where a company of the 24th Foot, plus a few extras stood firm against five thousand Zulus. The defence offered a distraction from the disaster at Isandlwana and the glory won there shielded Chelsmford and his friends from the anger of Parliament, the press and colonial opinion in South Africa. But it was only a temporary respite. Time tells and the cold hard facts of Chelmsford’s incompetence have been laid bare for many years.

The defence of Rorke’s Drift, itself, does deserve our admiration. The politics of the eleven Victoria Crosses awarded to the defenders and other awards can never detract from the incredible bravery of the men who held out against such odds. They are heroes. I have visited the grave of one of them, Frank Bourne, and it remains a special memory from decades on the history trail. But the real Bourne was nothing like the portrayal from the film and the actual man deserves much more respect. He is not alone but some of the others are a bit hit and miss and the men of Rorke’s Drift like many from historic classics of conflict are no different, really.

It takes all kinds and I am sure the Three Hundred Spartans included a few dodgy geezers or lightweights in their ranks. The Victorian army is full of colourful characters from an age of adventure, colonisation and optimism. They were tough men living very hard lives with little hope of theirs being a long or happy one. But the army offered an escape from the poverty, hunger and insecurity in Victorian Britain.

The film Zulu is typical of its time. Released in 1964 it followed the trend for accentuating the upper class officer caricature at a time when the issue of class was at the forefront of many minds. The reality was the Victorian army was a microcosm of British life with the elite holding all the aces. Then as now, armies are hierarchies wherever you happen to be. They are not democracies.

The British army is lampooned in many ways for the view of upper class twits lauding it over the honest Tommy and this imagery would find powerful credence in the dissections of the Great War taking place when Zulu happened to be released. The original stage production of Oh! What a Lovely War and Zulu are separated by just three years and the trend for bashing the establishment is a feature of  both.

The young Michael Caine; as Gonville Bromhead, is the picture of some of the class jealousies of the early 1960s. That his character was barely anything like the real Bromhead is irrelevant. Most war films at that time had a default setting mirroring the old Englishman, Irishman and Scotman bar room joke and Zulu takes it to the max with a mythical Welsh angle and a ubiquitous cockney rogue among the heroes. The 24th Foot were a Warwickshire regiment until well after the Zulu War and the real Henry Hook only found his way to London to work at the British Museum in later life.

I am not fixated on the film but it is a quick ninety minutes to learn the very basics while being very entertaining. One of my favourite books remains The Washing of the Spears by the much admired Donald R Morris, a US intelligence officer who wrote his wonderful history of British colonial engagement with the Zulus without leaving his office in West Berlin; a fact I learned from this book by Katie Stossel. In an age before the Internet and sources at our fingertips Morris’ book becomes all the more remarkable. I read it sometime before becoming engrossed in another colonial disaster from a similar period – Son of the Morning Star – Evan S Connell’s vivid account of the road to Little Big Horn. The parallels between the two stories are striking.

That there are a lot of books about Rorke’s Drift and Isandlwana should come as no surprise. There are thrilling narratives covering the battles in detail and as said, Donald Morris is another great starting point for the bigger history. The book reviewed here should not be your first dip into the Zulu War. But once you are ready I would suggest this super read is essential if you are seeking a wider understanding of events and their aftermath. In actual fact it is the latter that is crucial to how we perceive Rorke’s Drift today. I doubt any other British battle has a similar place in our culture.

Katie Stossel is not denying us the pleasures of Stanley Baker & Co, but she is setting things right because it is essential to retain the facts, even if it is contrary to the popular version. The author shows how some established truths of Rorke’s Drift are anything but. Not all of her observations will be universally popular but she offers compelling arguments and I found all this stuff fascinating.

We also learn about the many fibbers and downright liars who claimed to have participated in the defence. Once again the colourful nature of Victorian chancers is brought to life. The veracity of contemporary reports and accounts of the battle are a rum old mixture and the author is at pains to uncover the truth behind who wrote what and when. But she is quick to advise that some questions may never be answered. Much has been lost in the intervening hundred and thirty years, but the author holds out hope that the exact chain of events will become known.

This book reads well and holds our attention. Some of the detail is a little challenging but the author recognises this and sympathises with the reader. I don’t think this book should be considered as a Zulu War anorak’s dream, but you should have some knowledge of the important stuff before diving in. It is an example of a writer using the widest available resources to reassess established history. Katie Stossel frequently acknowledges the work of others and although her name is on the book jacket she more than likely sees it as a team effort. Respect for her peers is evident.

The fate of British redcoats over a century ago may be the stuff of the Kiplings of that era but their story is enthralling. A lot of people will simply merge them with earlier redcoats on another continent and the fact that it was a devious war of conquest assists impressions of a cruel empire and perfidious Albion at her worst. The ordinary rank and file where in Africa for far more prosaic reasons than the adventurous and generally privileged officer class but they fought and died together and have their place in the sun.

Questioning perceived history needs bravery and the author cracks on with the job and  regards the popular version of events as mythology. Find your way through some of the classics and then rip aspects of them apart with this excellent book. It is the job of historians to challenge accepted ‘facts’. The author does the job here with style and grace. The story has always been real to me and I love the details. Wherever the definitive story of Zululand resides Katie Stossel is on the case. Great stuff!