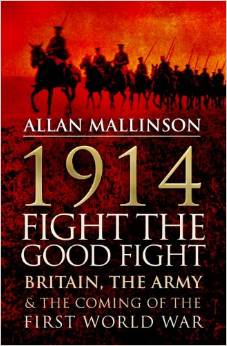 It never ceases to impress me the way authors lace their works with references to other books they have read as part of their research. Ok, it’s fairly straightforward territory for historians, but some use the effect well and some don’t. I suppose having the benefit of access to great libraries; at Sandhurst and so on, always helps whatever the end result. But the time still has to be put in and these details can make or break a book for me.

Once a year I get to enjoy tea and biscuits in the wonderful library of the Royal United Services Institute close to the old War Office in Whitehall. I usually stand there explaining the filing system to my mate Lance and commenting on some of the books we are looking at. We get a big grin out of our visits. I sense no irony in the fact that on stepping out onto the street the visitor is confronted with the proud equestrian statue of Douglas Haig.  I’m an admirer of the so-called revisionists, but while I am not a blind adherent, I am always keen to see balanced accounts of what Haig was saying and doing, rather than the versions preferred by some historians and commentators.

Needless to say Haig is an important character in this superior account of the first months of the war by Allan Mallinson. He was the coming man, biding his time while others faltered but he had some way to go before he would supplant Sir John French. Increasingly out of his depth, the little field marshal would survive for more than a year.

Mr Mallinson is a regular writer for The Times, a successful novelist and a long serving soldier who brings a professional eye to matters in a way I find similar to my hero, the late Richard Holmes. The author has the knack of explaining the mantra of Field Service Regulations and the culture of the general staff in a way that excludes agenda driven interpretation. I remember reading once the claim that soldiers have an unerring eye for detail and if you want proof positive then over five hundred pages of it are here.

Most importantly the author takes care to explain how the politics of 19th century Europe after the downfall of Napoleon Bonaparte led via various routes to the Schlieffen Plan on the one hand and Plan XVII on the other. Sandwiched in between these juggernauts were the British and, pointedly, the Belgians. While it remains difficult to imagine a country could enter into a ruinous war for the sake of what appears to be an obscure obligation, it is important to set in the context of the times and not in the lifetime of the historian presenting it. The 1839 Treaty – the scrap of paper – is not a trivial thing by any means. It was not the sole reason Britain felt obligated to join the war, but it did have immense influence at a time when honouring treaties was at the heart of British establishment thinking.

You might find yourself listening to that otherwise enjoyable anthem by The Farm where our forefathers are lost in millions for our country’s pride and if you take time to read a book like Mr Mallinson’s you will realise that sort of tosh really should have died with charlatans like Allan Clark or at the end of the pier with O What a Lovely War. Learning about episodes of history in isolation can be immensely rewarding by itself, but the real magic comes from joining the dots and piecing it all together into a coherent linear truth.

I like the careful analysis and strong rebuttal of statistics and interpretations presented in other works. The author gives me an impression of an admiration for the actions of Winston Churchill, something I do not share; but this is why I read books – to get a rounded appreciation and not fall into the kind of traps I have mentioned. There is always more to learn.

Having dispensed with the gathering nightmare, the author gets on with the calamitous opening weeks of the war on the ground.  I like the way he can switch from the drawing rooms of London and Berlin to the blister bursting pavé with such ease. Here again we are treated to quotes from some of our cherished witnesses – Edward Spears and Frank Richards especially. The clash of cultures between Sir John French and his antagonist Lanrezac are presented in bald bemusement not unlike other accounts.

The author takes us through the British army’s important engagements of 1914 and saves us from detailing the eye watering horror of the Battle of the Frontiers, consigning the day-to-day of much of Plan XVII to other writers. All the known dynamics are here.  John French versus the French, John French versus Kitchener, John French versus Smith-Dorien. While the long realised theme persists we are also treated to others; the scheming of Henry Wilson, the adroit Douglas Haig, a stolid Joffre and the perennial nuttiness of Kaiser Wilhelm with his progressively dominant field marshals waiting in the wings. Plots and subplots abound and the thing that should always impress us is this is not fiction, not Game of Thrones per se, but a game of thrones, especially where the Kaiser is concerned.

Joined up history will always outgun even the most colourful snippets and I challenge anyone not to enjoy this accessible account of the weeks and months that set in motion a world turned upside down. Much more importantly it was a war that touched the lives of millions – from blue bloods to ordinary folk. When the war started my great-uncle Les was a 19 year old Territorial bound for Malta to replace a battalion of regulars called to battle. He was killed in Flanders fields just a year after the main period of this book. The quest for the true relevance of the events in this book takes us from the roll call in the back of the London Regiment’s official history via many other old books to a grave on the outskirts of Ypres. It becomes real when I stand over that very same grave while listening to cows lowing in the fields beyond on a crisp blue-sky morning.

This book, like an increasing number, came to me in paperback format. Recognition I like to think, that publishers and their PRs are becoming increasingly aware of WHO.

We try to get a balance covering theatres of conflict across the world. Perhaps some readers have notions of a fixation with World War One, but it is a simple case that the centenary drives so much of the military book output at the moment it is impossible to ignore. I am not a scholar like my chum Dr Wayne Osborne who brings so much care to his role, but I am an avowed enthusiast. It is a shared passion for history that drives WHO and books like this from Allan Mallinson make the pursuit unendingly satisfying.