The US Marine Corps has revised the list of soldiers who participated in the iconic raising of the US flag on Iwo Jima during World War II.

One of the soldiers in the famous photograph of the second US flag raised on Mount Suribachi on the Iwo Jima atoll has been misidentified for 76 years since the photo was taken by Associated Press photographer Joe Rosenthal.

Three historians used film footage from the time the flag was raised along with other pictures taken there at that time. In the end, they determined that Corporal Harold “Pie” Keller was one of those who took part in raising the flag, not Pfc. Rene Gagnon as was previously believed.

Stephen Foley, Dustin Spence, and Brent Westemeyer were the historians who did the research. Their findings were confirmed by a special investigative board convened by the Marines and by investigators from the FBI Digital Evidence Laboratory.

The Marine Corps issued a statement saying that the work of private historians and the FBI’s Digital Evidence Laboratory to improve the historical record of the moment the second flag was raised on Iwo Jima.

Three years earlier, a Marine Corps inquiry found that Navy hospital corpsman John Bradley was misidentified as one of the flag raisers. They corrected that to Pfc. Harold Schultz instead.

According to the Marine Corps statement, every Marine who fought on Iwo Jima or supported the fighting from the sea or air is part of the history of the event. The statement went on to say that they were all heroes.

The news that Keller was one of the men in the photo was a surprise to his family. According to his daughter, Kay Maurer, Keller never discussed it. She said that they knew that he had fought in the war and had a wound to his shoulder (he received the Purple Heart for injuries received in battle), but he had never mentioned participating in the flag raising on Mount Suribachi.

The family had a framed picture on their wall of Keller in another Rosenthal photo – the “Gung Ho” shot which was taken on February 23, 1945.

Keller earned his “Pie” nickname after eating too much of the dessert before a football game which caused him to vomit in front of his friends. He died from a heart attack in 1979. His obituary makes no mention of the flag raising. Ironically, Gagnon also died from a heart attack in 1979. In Gagnon’s obituary, he is referred to as an “Iwo Jima flag raiser.

The iconic photo by Rosenthal is actually a picture of the second raising of a US flag on Mount Suribachi during WWII. Officers were not satisfied with the first flag and ordered that a larger flag be raised.

According to the Marine’s statement, Gagnon played a role in the second flag raising by being directly responsible for delivering the flag to the top of Suribachi. He also returned the first flag for safekeeping. So, even though he did not actually assist in the raising of the flag, it may not have ever been raised without his efforts. 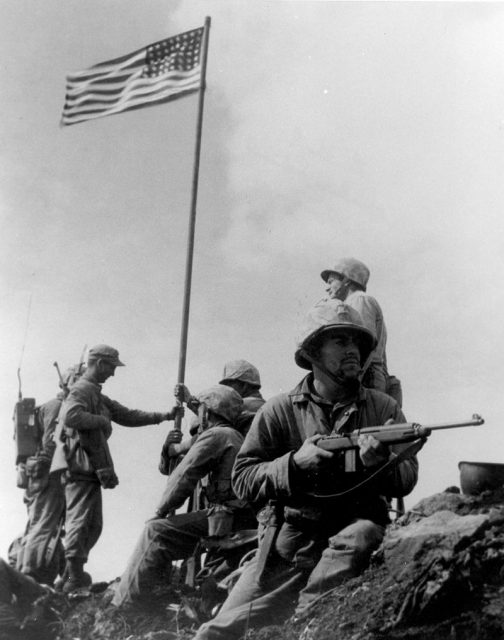 Westemeyer had long believed that Gagnon was not one of the ones who raised the flag in the photo due to his build. He believed that Keller was a better fit based on physical stature.

Another Article From Us: Remains of B-17 Gunner Identified

Once Westemeyer spent time with film footage shot by Sgt. Bill Genaust, a Marine cameraman who was killed in action just one week later. He claims to have watched the footage “a thousand times over” after which he was convinced that the man in the “number two position” was not Gagnon.