What lies beneath the dark waters and rolling waves of the Falkland Islands are mysterious, awe inspiring, and to many of us, a little frightening.

Everything from tiny rowboats to massive cruise ships have gone down at the apparent whim of ocean waters, sometimes because of ice, or waves, or weather hazards man seems ill-equipped to deal with at sea.

During war, nations have little choice but to take to the sea to combat enemies, who come at them on land, from the air and at sea.  World War I was no exception.

Great Britain, a chief participant in that conflict, was famous for its navy power, and sank many a German boat during the four years the nations were at war.

A number of German ships sit in the dark, cold waters, sunk by the Allies but never recovered. The expression “lost at sea” is truly apt for men who sign on as sailors and never know whether they will set foot on land again.

One such ship, along with its 800-member crew, has been laying at the bottom of the Atlantic Ocean, just off the coast of the Falkland Islands, for more than a century.

The SMS Scharnhorst, a German cruiser. It was sunk by the British during the Battle of the Falkland Islands in early December, 1914.

Now, the ancestors of the men on that boat know where their forefathers are buried, thanks to a recovery operation by marine archaeologist Mensun Bound.

He was deeply touched, he told BBC News, by the successful operation, an event that can take someone in his field an entire career to accomplish.

He told the BBC, “Suddenly… there was no doubt that it was one of the German fleet,” he stated. He and his team were monitoring cameras and computers linked to a Seabed Constructor, a highly technical piece of equipment used expressly for these marine operations.

“Suddenly, she just came out of the gloom, with great guns poking in every direction. As a Falkland Islander, and a marine archaeologist, a discovery of this significance is an unforgettable, poignant moment in my life.” 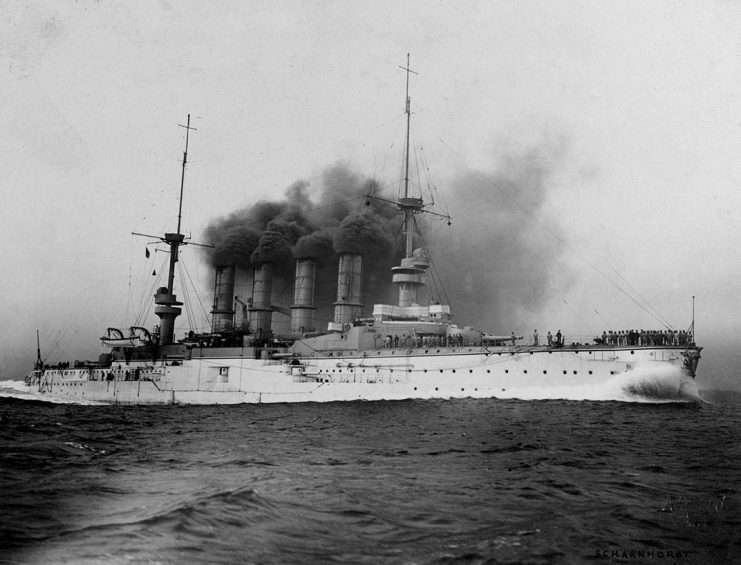 The search for the Scharnhorst initially began five years ago, but the crew simply didn’t have the technologically advanced gear they needed to access the ship.

They knew where it went down, of course, but could not pinpoint its location without the Seabed Constructor.

During the entire battle more than 2,200 German sailors perished.

One of them was Maximilian Graf Von Spee, who was Vice Admiral of the East Asian Squadron. His family was notified immediately of the discovery.

One of his descendants, Wilhelm Graf Von Spee, spoke with the BBC on behalf of the family. He said it was a “bittersweet” moment for them, and added.

“We take comfort from the knowledge that the final resting place of so many has been found and can be preserved, whilst also being reminded of the huge waste of life… We lost a father and his two sons in one day.”

The ship was launched from Hamburg on March 23, 1906, and did participate in one battle in which the Germans defeated the British Navy.

But only weeks later the Falkland Islands battle ensued, and soon the Scharnhorst was on the bottom of the sea.

The site, the BBC reported, is going to be preserved for the men who are buried there, under the U.K.’s Maritime Heritage Trust. That means that the ship cannot be disturbed, nor can anyone — recreational divers, salvage operators, anyone — alter it or remove its many artifacts.

At the conclusion of the Great War, Germany’s navy was scuttled, in accordance with the treaty agreement among the Allied nations.

However, within a few short decades, Adolf Hitler would break that agreement, and begin building a navy for Germany once again.

Another Article From Us: 6 Massive Actors You Forgot Were In Band Of Brothers

Then, he would lead his country back into war, and spend five long years trying to conquer western Europe. Thanks again the Allies, the soldiers and sailors and pilots, he would not succeed.