Over a period of six years of conflict, from 1939 to 1945, aircraft designs had progressed in leaps and bounds.

From the obsolete biplane to the world’s first fighter, from crude two-engined bombers to radical designs of the B-29 Superfortress heavy bombers, World War Two had seen the most radical use of aircraft in the battlefield.

Here are ten of the best!

The Soviet Yak fighter (Yakovlev Yak-3) was a Soviet dog-fighter that was used in World War 2. This was a robust craft, and its maintenance was very easy therefore making it liked by all ground crew and pilots. They were first developed in 1941 but didn’t see service until three years later, 1944. 4848 of these aircraft were manufactured in total. Their main use was as tactical fighters, engaging in dogfights in the lower sky (13,000 ft and lower).

The Yak was considered to be one of the lightest and smallest aircraft to be used as a major combat fighter from all the other combat fighters that were used within World War 2. It provided excellent performance due to its power-to-weight ratio, which was extremely high.

World War 2 French ace, Marcel Albert, considered the Yak to be a far superior aircraft to the Spitfire and P-51D Mustang, having flown the Yak in the USSR.

Following the end of the War, the Yak flew with the Polish and Yugoslav Air Forces and then, in 1952, retired from service. The Germans began designing this jet-powered aircraft before the Second World War even started. They had engine problems and interference from top-level officials that kept this amazing machine grounded until 1944.

It was faster than any Allied aircraft including the British Gloster Meteor and it was heavily armored as well. The 262 was used in many situations like the light bomber, might fighters and reconnaissance.

The Pilots that flew the 262 had 542 confirmed allied kills, though some believe it may have been higher. The only way the Allies had a chance of winning were to destroy the planes before they could even get off the ground.

With its engine reliability issues and the Allied attacks of oilfields, this plane became very ineffective in late-war situations. With all this the 262 had almost no real effect on the war as a whole, they were placed into actions too late, and not enough of them were ever made. The F6F was the plane that carried the US on its back all the way to the gates of Tokyo. The F6F was a very good rival to the Vought F4U Corsair at being a carrier-based fighter.

The F6F was, much better at carrier landings, however, which made the Hellcat a very viable option as the main fighter for the Navy in World War II. The F4U was used mostly in land-based missions by the U.S. Marine Corps.

The F6F was similar to the Wildcat in a few ways but was actually a completely new design; it was powered by a 2,000 HP engine, the same engine that was in the F4U and the P-47 Thunderbolt Fighters. The F6F was actually called the “Wildcat’s big brother.”

The F6F was an amazing carrier-fighter, it debuted in 1943, in an attempt to counter the amazing Mitsubishi A6M Zero and it helped to secure air superiority in the Pacific. The quality came from its straightforward and basic design, the F6F was almost never modified and had a total of 12,200 built in just two years.

The F6F was credited with destroying over 5,000 aircraft while in service for both the U.S. and the Royal Navy’s Fleet Air Arm. No other Allied naval aircraft even came close, after the war the F6F was slowly fazed out of frontline mission but was still used as a night fighter up until 1954. It was first used in the Spanish Civil war and even stayed in use until the dawn of the fighter age near the end of World War II; it was still the backbone of the Luftwaffe’s Fighter Force. Slowly but surely it was being replaced by the superior Focke-Wulf Fw 190. The Mustang was designed originally to be used with the Allison V-1710 engine – making it a very good aircraft. When the B & C models were made of the P-51, they added a Rolls Royce Merlin engine and this completely transformed its performance at high altitude (15,000+ feet) which meant it matched or even bettered that of the Luftwaffe’s fighters. Want to know about one of the greatest Allied fighters ever? How about two turbocharged engines, range, firepower and the best aerodynamics of the era made the P-38 one of the top choices ever. Its only drawback was its altitude capabilities but even still, it dominated the Pacific.

The P-38 with its iconic twin booms and a single, central nacelle in the cockpit and armament were contained was nicknamed the “fork-tailed devil” by the Luftwaffe and “two planes, one pilot” by the Japanese.

The P-38 saw most of its success in the Pacific and China-Burma-India Operations; it was used by the U.S.’ top ace pilots, Charles H. MacDonald (36 victories), Thomas McGuire (38 victories) and Richard Bong (40 Victories).

The P-38 was the main fighter in the Southwest Pacific Theater until a large force of P-51D Mustangs was brought in towards the end of the war. The Thunderbolt was one of the heaviest and largest fighter planes ever built; it was also only powered by a single piston engine. It was only built from 1941-1945 and was equipped with eight .50-calibre machine guns, four per wing which were absolutely devastating.

When it had a full payload the Thunderbolt weighed around 8 tons; it would carry five-inch rockets or just a single bomb that weighed 2,500 pounds; it could even carry over half of the B-17 which was insane for a fighter plane.

It even out killed the P-51 Mustang during the first three months of 1944, having 540 kills to the Mustang’s 389, but eventually the Mustang over took it in kills, 972 for the Mustang and 409 for the P-47 in the second quarter of the year. The Thunderbolt even flew more attack missions than the P-51s, P-40s and P-38s combined.

Not only was the Thunderbolt one of the main fighters for the U.S. in World War II, but also served with the British, French, and Russians. Brazilian and Mexican squadrons were given the P-47 instead.

The cockpit was roomy and very comfortable, the pilot had an amazing line of sight. Even today the Thunderbolt name lives on with the Fairchild Republic A-10 Thunderbolt II. 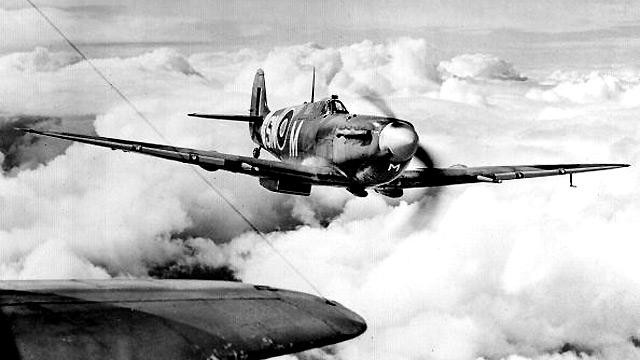 The Spitfire is most likely the most famous aircraft from the World War II era. It was the king of low-altitudes, it will be known forever as the plane that turned the tide in the Battle of Britain.

It’s main foe in that battle was the 109, the Spitfire made the Germans stay low with their bombers, which was not ideal for the 109 but it was perfect for the Spitfire.

In the Battle of Britain, the Spitfire gained fame by having the highest victory-to-loss ratio among British aircraft. Bob Tuck (27 kills), Johnnie Johnson (34 kills) and Douglas Bader (20 Kills) were the ace fighters in that battle.

The Spitfire was also the most produced fighter for the British and was continuously produced throughout the war. When the Zero was first introduced into the war it was considered the absolute standard in carrier-based fighters, combining both long range and maneuverability. During the early part of the war it became the most feared dogfighter of all of the aircraft in existence, its average kill-to-death ratio was 12 to 1.

But by 1943 the introduction of better equipment and tactics made it where the Allied pilots could compete with the Zero.

The IJNAS would also use the Zero as a land-based fighter. In 1943, the weaknesses of the Zero were really starting to show, it could no longer compete against the newer planes coming in with their greater speed, firepower, armor and their ability to match its maneuverability.

Even though the Zero was outdated by 1944, the plane was still in use on the front lines because of newer designs being pushed back and the Japanese having production difficulties.

During the final years of World War II, the Zero was even used in kamikaze mission. The Zero was the most produced aircraft for the Japanese during World War II.