Flying an airplane at the best of time demands enormous skill, years of training and the ability to keep a cool head, no matter what goes wrong. When an aircraft’s landing gear malfunctions, however, it really does take an exceptional pilot to stay calm and to maneuver through such a difficult and dangerous situation.

An American pilot – who was flying a Marine Corps Harrier jump jet at the time – managed to pull of a breath-taking vertical landing, successfully bringing his airplane to rest on a stool aboard the USS Bataan. Just after taking off from that same amphibious assault ship, the plane’s landing gear failed to deploy. The subsequent landing – an amazing feat on the part of the pilot – was filmed from the deck of the United Stated Navy assault ship.

USS Bataan (LHD-5) is a Wasp-class amphibious assault ship, which was originally commissioned back in 1997. The ship was actually named to honor the memory of those who defended Bataan Peninsula. This heroic incident took place on the western side of Manila Bay in the Philippines, during the early days of US involvement in the Second World War.

After the defenders surrendered to the Japanese forces, the infamous Bataan Death March took place. Thousands of American and Philippine soldiers were killed, and the event was later recognized as a war crime.

On June 7th 2014, Captain William Mahoney was flying an AV-8B Harrier. This powerful fighter plane was originally developed in the United Kingdom, in the 1970’s, and it is capable of taking off and landing vertically. Although the Harrier has one jet engine it has four nozzles that direct the jet engine thrust downwards for vertical lift.

Despite its technological advancements, the plane is sometimes referred to as the “widow-maker” by members of the military, as it has an accident rate three times higher than other similar aircraft. Specifically, the majority of problems have arisen when taking off or landing, and that is exactly what Mahoney was dealing with in 2014. 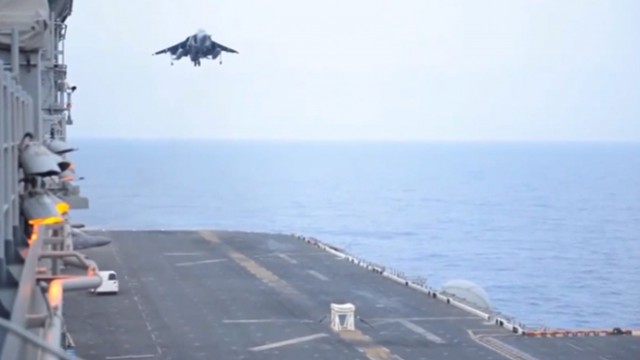 After the pilot took off from the USS Bataan, he became aware of a potential problem with his landing gear. Just to be sure, he made a low pass over the ship, and his fears were confirmed – the landing gear in the nose had not deployed.

The US Marine Corps has actually developed a piece of equipment for just such a problem; a massive stool which supports the fighter plane’s nose. Now all the pilot had to do was land on it, but that was easier said than done.

There was no room for error in this tense and extremely risky situation. If he missed the stool the large $30 million plane would crash directly into the deck of the USS Bataan. This would not only damage the aircraft and put the pilot in great danger, but it could also ignite the fuel on board, raising the takes even higher. 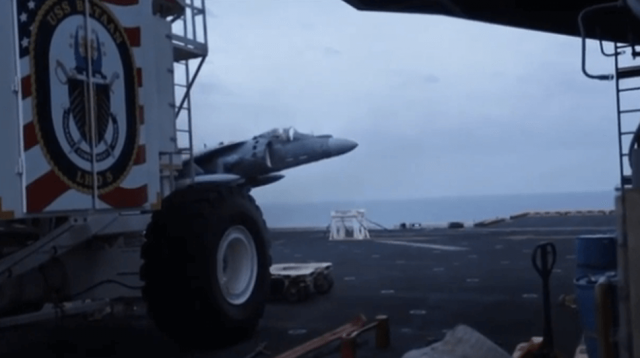 Skillfully the pilot lowered the airplane to just 20 feet above the deck using the Harrier’s nozzles. All the while the air controllers and lights on the ship were guiding him towards the stool, and anyone present must have watched with baited breath as the plane came in to land.

Looking back on the event, Captain Mahoney said: “‘So I’m at 20 feet stabilizing and I can’t see the stool. I don’t even know it’s there. I didn’t see it coming over the end of the ship. I remember looking for it, but I never saw the stool. At that point, I was just sort of along for the ride.”

In this incredible footage, viewers can actually witness this remarkable landing as it happened. With so much on the line, it’s truly a nail-biting video, and a testament to the outstanding abilities of Captain Mahoney himself.