A desperate gamble by a struggling army, the Battle of the Bulge was Hitler’s last great attempt to end the Second World War on terms short of abject failure. A plan that even senior German commanders considered doomed, it was a last dynamic attack by a regime that had briefly conquered half of Europe through such strategies, but which would soon be gone.

A Bold Plan for Desperate Times

The summer of 1944 saw Germany in retreat on every front. To the south, she was fighting Allied forces working their way up Italy. To the east, the Soviet juggernaut had won a long defensive battle of attrition and was now on the offensive. To the west, the D-Day landings had opened up a third front, with hundreds of thousands of allied troops advancing towards the Rhine.

It was on this third front that Hitler saw hope. There would clearly be no German Reich reaching all the way to the Atlantic, but he believed that a decisive German success might force the Americans, British and French to negotiate a peace. Such was Hitler’s hatred of Communism that he believed his former enemies might then join him in attacking the Soviet Union, saving Germany from destruction.

On 16 September, Hitler announced his scheme. The German army would advance through the Ardennes, as they had done with much success in 1940, and take Antwerp. Pushing at the join between British and American forces, they would isolate the British and cut American supply lines.

The operation was initially planned in secret. Field Marshal Gerd Von Rundstedt, commander of German forces in the west, was appalled at the idea. He considered the available forces too small for the task, the plan so ambitious it was nonsensical.

Hitler took no interest in Von Rundstedt’s pleas for a less ambitious offensive. His success had been built on bold offensive operations. This would be one more.

Von Rundstedt summed up the situation in his speech to the soldiers before the battle. “Your great hour has arrived … We gamble everything.” It was an incredibly daring offensive, but it would use up all the troops that could be spared on the western front. If Autumn Fog failed then all that would be left was a long drawn out retreat.

The focus of the plan was an advance by two Panzer armies along a 90-mile front. On the right was the Sixth SS Panzer Army, a new force under Colonel-General Joesph Dietrich. On the left was the Fifth Panzer Army under General Hasso von Manteuffel. The southern flank would be defended by the Seventh Army under General Erich Brandenberger.

One other force was vital to the offensive. A band of English-speaking soldiers had been given American uniforms and weapons and sent behind the Allied lines. Led by SS Colonel Otto Skorzeny, they would create chaos for the Allies by misdirecting troops.

The battle was commanded by Hitler himself, who moved from his Wolf’s Lair base in the east to the Eagle’s Lair in the Rhineland ready for the fight. 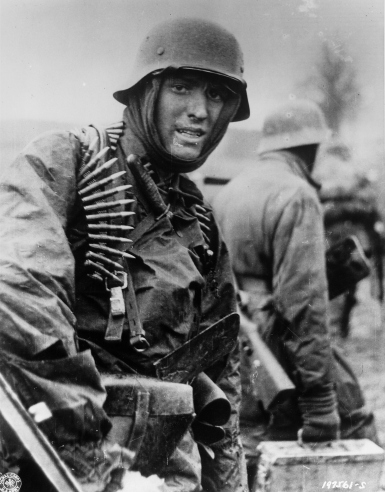 Fortune favoured the Germans. The Americans, exhausted from their advances and not expected an attack in the Ardennes, had withdrawn experienced troops to recuperate, leaving just four divisions of the 8th Corps on that 90-mile front, with inexperienced units guarding their flanks. Poor weather grounded Allied aircraft for the start of the attack, taking away their advantage in the skies.

Advancing fifty miles through the American lines, the Germans swiftly established a salient. Though the Seventh Army stalled, the Panzers made strong initial gains.

Though the advance was going well, British Prime Minister Winston Churchill dismissively referred to it as “The Battle of the Bulge”. Churchill proved correct in his assessment of the situation.

The use of Skorzeny’s disguised troops was a failure, with no-one believing that they were Americans. Having disguised themselves as enemy soldiers, most were shot as spies.

Meanwhile, the tanks stalled. Failures in Russia and at sea had left the Germans short on fuel, and the plan relied on them captured it from Allied vehicles. Fuel shortages prevented the Sixth Panzers exploiting a gap they created in the Allied lines.

The Fifth nearly reached the River Meuse – the target Von Rundstedt had wanted for a more limited offensive. But then the weather cleared and attacks by Allied aircraft halted the advance. The Fifth’s supply route was also compromised, as the American 101st Airborne Division under Brigadier-General Anthony McAuliffe held onto the critical town of Bastogne. The surrounded 101st held out for six days using supplies sent by air, blocking German supply routes.

Back to the Rhine

On 19 December, Eisenhower told the Allied generals that “The present situation is to be regarded as one of opportunity for us and not disaster.” German advances had largely stalled and Hitler had refused Von Rundstedt’s advice to redirect troops to more successful areas.

The Fifth Panzers took St Vith on 21 December, but it was clear that their momentum had run out. Next day, Von Rundstedt asked permission to withdraw, but Hitler refused. On Christmas Day, the Allies smashed the Sixth Panzers, and Bastogne was relieved on Boxing Day. At last, Hitler withdrew.

The Battle of the Bulge cost the Allies nine times as many casualties as the Germans, who also lost fewer tanks. But with its manufacturing cities bombed to rubble and so much of its population already in arms, Germany could not afford to replace the losses, while a steady stream of men and equipment was flowing from America.

The battle had gained Germany six weeks to prepare defences, but the cost had been huge.