It doesn’t take a lot of detective work to figure out what kind of man was Victoria Cross recipient Ernest Smith.

By his own admission, Smith was a foul-mouthed, hard-drinking, and insubordinate soldier.

During his time in the military, he was promoted to Corporal nine times only to find himself quickly busted back down to Private every single time.  But Smith loved a fight and there was a whole lot of that going on in 1940s Europe.

He was the only Private in the Canadian Armed Forces to be awarded the Victoria Cross in the Second World War.  But then again, becoming a Private on nine separate occasions kind of titled the odds of that in his favor.

Getting into the Fight

Ernest Smith joined the Canadian military in 1940 and became a member of the Seaforth Highlanders of Canada.  Later that year, Smith deployed to England where he would spend the next 3 years training, fighting, drinking, getting promoted, and then becoming a Private to repeat the cycle all over again.

However, what became clear was that Smith was ready to get into the fight and he would get his chance when the 1st Canadian Infantry Division landed in Sicily in 1943.

The fighting in Sicily was tough sledding as the Axis did not give ground easily.  Smith was a member of the anti-tank platoon and proved himself worthy from early on in the fight.

German tanks outclassed much of what the Allies had to offer for much of the war and to take one out often took infantry to draw in to close range with the tanks.

Smith was wounded twice during the Sicily campaign, but remained in the fight and gained valuable experience that would propel him on to future greatness.

By the time Smith engaged in the action that would award him the Victoria Cross, he was done with his process of getting promoted only to be busted back down.

It was as if the killing of Germans was enough to satisfy his earnest desire for a fight.  He was quoted as saying, “I don’t take prisoners. Period.  I’m not paid to take prisoners. I’m paid to kill them.  That’s the way it is.”

On the evening of October 21st, 1944, Private Smith along with two companies of the Seaforth Highlanders of Canada crossed the river Salvo in Northern Italy to secure a bridgehead.

Heavy equipment and armor was expected to cross the river in support, but heavy rain turned the river into a raging current as it rose as much as six feet in some locations. 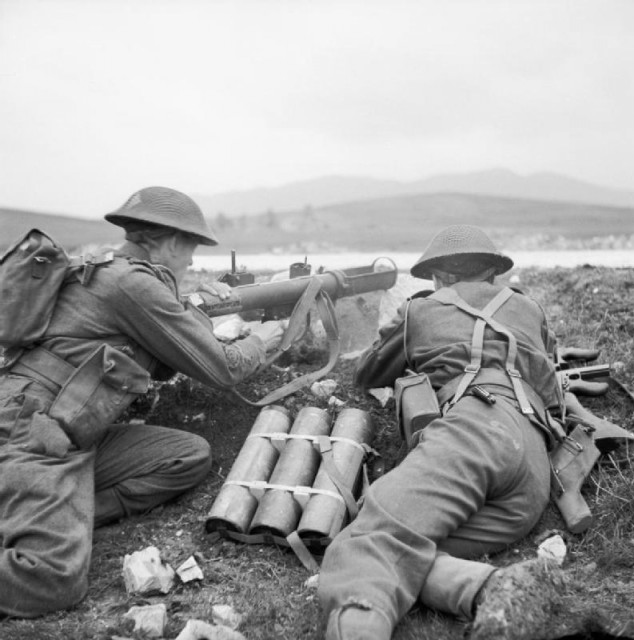 In the early hours of the next morning, Smith’s position came under heavy fire and counterattack from three Panther tanks of the 26th Panzer Division along with supporting infantry.

Unafraid of a fight, Smith and a few others crossed an open field to gain a position in a ditch that would allow him to take out the Panther tanks at close range.  Smith was armed with the PIAT anti-tank weapon which is extremely effective, but mostly so at close range.

However, Smith’s position was not a surprise to the advancing Panther as it sprayed them with machine gun fire as it approached.  Smith’s colleague was seriously wounded, but that didn’t stop Smith from standing up with the PIAT and taking out the lead Panther.

Infantry then dismounted only to be killed or chased off by Smith spraying them with small arms fire.

A second Panther advanced beyond the PIAT’s range and continued to reign down fire in combination with the infantry.  Smith protected his wounded comrade with nothing but a tommy gun and held the advance in check.

Inspired by his actions, the rest of the company leaped into action and took out the second Panther along with an array of other German vehicles.

Honest Till the End

Smith’s actions were credited with holding the bridgehead in the absence of heavy support and earned him a nomination for the Commonwealth’s highest military honor.

He was personally awarded the Victoria Cross by King George VI in a ceremony at Buckingham Palace in December of 1944.  And in fitting fashion, Smith was placed in a Rome jail cell the night before he was to be commended in order to, “keep him out of trouble.”

Smith would go on to become the face of the war for much of Canada despite his rabble-rousing spirit as all could recognize the man who knew what to do in a fight.  After the war, Smith briefly left the military only to rejoin in 1951.

Despite being devastated to miss the combat action in Korea, he would go on to serve in the military until his retirement in 1964.  Smith died in 2005 and was buried as a national hero.

Smith was a man who didn’t mince words or action while becoming a garrison commander’s worst nightmare.  But in a fight when all was on the line, there was no other man you would want beside you.

This is often the dilemma of the disciplined military as they regularly transition from garrison to war at a moment’s notice.

Private Smith, who eventually did make and keep some rank, was clear about who he was.

When the greatest war to face this earth raged, Smith ensured his men lived while the enemy died and there is little else you could want from such a man in such an era.