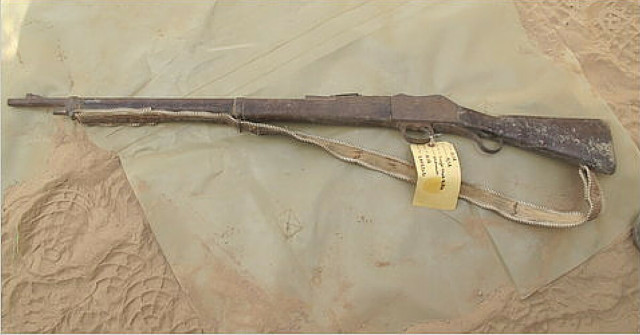 Imagine slogging through the sands and sun of the Middle East with your fellow military men and women. There are many hidden dangers to come across – and, surprisingly, weapons that you might recognize from your military history books. That’s right; even seas and thousands of miles away from your homeland, there’s a chance that you might stumble upon weapons left behind by your ancestors.

This is what occurred a few years ago, in the desert landscape of Afghanistan. British troops stumbled across an unexpected find: their nation’s very own weapons long left abandoned.

128 years after the British troops were defeated at Maiwand in July of 1880, soldiers from the very same nation returned to the site of the conflict to find long-lost weapons.

As members of the British military faced off against Taliban and al-Qa’ida forces in Afghanistan in 2008, they uncovered a surprising and unexpected find from their nation’s own history: the battle weapons used by their ancestors of the Victorian era.

The Original Conflict of the 1800s

In July of 1880, the British Empire was in the midst of the Second Anglo-Afghan War. The latter of a two-part effort on the behalf of British-controlled India to invade Afghanistan, this war stretched from 1878 to 1880 and pitted Sher Ali Khan of Afghanistan’s Barakzai dynasty against the all-powerful British monarchy that ruled India and Pakistan during this era.

According to Mark Hawkins, military arms expert and co-owner of England’s The Lanes Armoury, the battle between the British and the Afghani militaries was not exactly an easy victory for the famed Empire of Western Europe. In fact, when British troops first entered Afghan territory and took to battle, they lost – not a battle here or there, but in surprising numbers.

Every troop sent out to fight never returned, instead perishing on the battlefield. As the Afghanistan military gained ground and killed British troops, they took the weapons left behind by the dead.

Despite, this the British once again tried to dominate the Afghans. The British and the Afghans confronted each other at the battle of Maiwand and to the surprise of the world, the Afghans defeated the army of the most powerful nation on earth.

In the 63 years that Queen Victoria reigned over the nation and its colonies, the battle of Maiwand earned a place among the greatest military embarrassments of the empire throughout its history. Despite its modern and advanced weapons, skilled and trained troops, and a large army of 12,000 soldiers, the British Empire saw itself defeated by a mere 2,500 Afghan men. 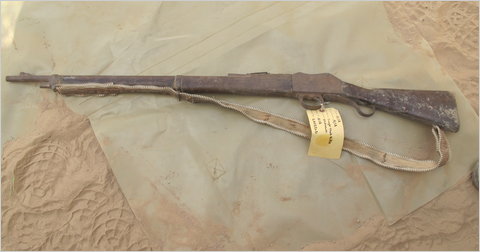 The British experienced a series of defeats in Afghanistan.  One of these battles, in particular, occurred in the Afghan village of Khig, where British troops armed with Martini-Henry rifles made a final stand against the native soldiers.

After the bloodshed, only two officers and nine soldiers stood alive; about 1,000 fellow men lay fallen on the ground. However, according to the Afghan witnesses who saw this battle conclude in its final moments, the British men refused to surrender. Instead, the eleven men still alive charged at the Afghan forces that surrounded them, leaving their safe places of shelter behind to attempt one final stand against the enemy.

The British men left standing charged the Afghan troops so great in number – yet they quickly fell, as the Afghan men fired at them and ensured they were  dead before advancing even another foot.

Despite the great defeat experienced by the British Empire in 1879, the British proved themselves victorious at the war’s end – surprisingly, peace treaty arrangements were made between the two nations. England was allowed to retain influence in Afghanistan, as the result of the Treaty of Gandamak, and the British and Indian troops remaining in Afghanistan left the country altogether.

At the end of the years-long conflict between the two international powers, the tribes within Afghanistan were allowed to rule once again their nation independently. The British retreated and allowed the Afghans to rule their country, according to their local customs; however, the powerful British Empire retained total control over the nation’s foreign affairs, policy.

In the peace treaty that established this arrangement for decades to come, England was permitted to prevent any other  international power from dominating Afghanistan or taking control of this crucial  Asian nation by military force. With the Russian Empire hovering nearby, this treaty ensured that England would keep Russia at bay, and prevent the also powerful nation from encroaching on their Indian territories.

The battle, and defeat, that occurred at Maiwand so many years ago was once again brought to the forefront of history when British soldiers stumbled upon ancient Victorian-era weapons – the very guns used in battle by their forefathers and ancestors in 1880.

Although the soldiers who entered Afghanistan in 2008 were not expecting to discover anything more than brutal combat and the perils of modern warfare, what they uncovered had little to do with the battles of today’s armies and conflicts. They also discovered weapons that have become collector’s items ever since they fell out of use in the British military.

According to Peter Smithurst, the senior curator of historic firearms at the Royal Armouries Museum, the weapons with which soldiers of the British Empire fought were quite impressive weapons. Today, the guns used during the battle of Maiwand are considered classics within the circles of weapons collectors and historians.

In fact, the Martini-Henry guns used at the battle of Maiwand were the first purpose-made breech-loading rifle used by the British military – and it quickly became an iconic weapon. 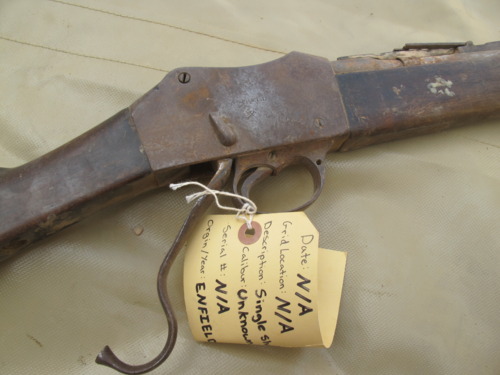 Unfortunately, the first Martini-Henry rifles were  first used  in a  battle in that horrible defeat at Maiwand in the summer of 1880. Once thought lost to history and to the days of war, it came as an incredible surprise when British troops uncovered a buried stash of those Victorian rifles.

As soldiers worked their way through Afghanistan in pursuit of the Taliban and al-Qa’ida, they stumbled upon a hidden stash of Martini-Henry rifles in the country’s Helmand province. Upon their discovery, the soldiers sent the guns back home to England. However, once back in their homeland, the weapons were reclassified as expensive antiques.

In the months after the discovery of the late 1800’s rifles, they saw great popularity with collectors of firearms and war weapons. The Martini-Henry was already an item collector’s clamored over, thanks to its important role in the development and progress of firearms. It saw action – and success – on battlefields during the height of the British Empire’s golden era and was used in many colonial conflicts around the world.

Because of this, it’s no surprise that the uncovered rifles from Afghanistan set off quite a craze among collectors. In fact, two of those rifles were put up for sale in an antique shop located in Sussex; each sold for £1,100 (about $1,500 in U.S. currency).

Will More Weapons Be Found?

The discovery of so many hidden weapons, lying beneath the soil of Afghanistan, brings up a new question: are there other valuable and historically significant weapons hiding elsewhere in the country, or in other places around the world? The answer is quite possibly a yes, according to Smithurst.

Ever since British, American, and other nations’ military forces have re-entered Afghanistan, there have been  opportunities to uncover rifles and similar antiques from the past. As Smithurst points out, many different countries have fought in or occupied Afghanistan, bringing with them weapons from as recently as the 1990s, or as distant as the 1800s – so who knows what other weapons could be found there. 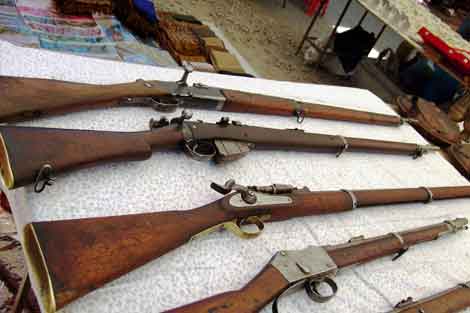 Perhaps, in the years to come, even more, interesting military finds from other armies will be uncovered, and returned home.