A sniper is a skilled marksman whose job is to shoot someone from afar without hitting anyone (or anything) else. But it’s not just about pointing, shooting, and hitting. Snipers must also take into consideration their weapon, ammunition, wind velocity and direction, air density, and even the rotation of the earth – the mastery of which allows them to perform deadly miracles.

Since most snipers work in a military setting, and most military operations are secret, no one knows exactly how many sniper miracle-workers are out there. The following, however, are the celebrated exceptions.

Häyhä fought for Finland against the Soviet Union during the Winter War (1939-1940). He was such an effective sniper that the Russians called him the “White Death” because of his winter camouflage.

In under 100 days, Häyhä made 542 confirmed kills with an M/28-30 rifle, an average of five kills a day. To make it even more challenging, he didn’t use telescopic sights, since they fogged up in an arctic setting and he didn’t like the glint they gave off. So he used iron sights, instead.

For his service, he was made an ensign at war’s end. 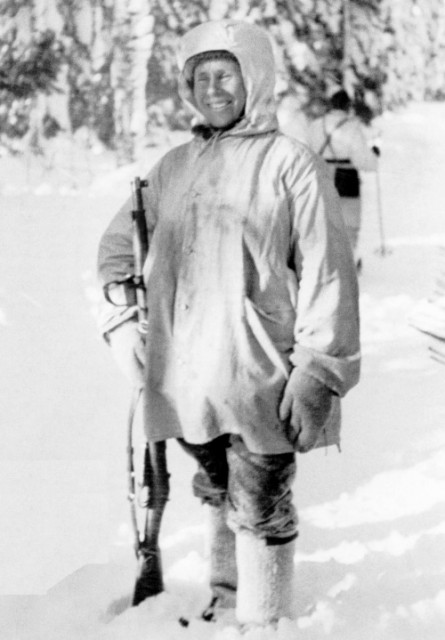 Hathcock remains a legend in the military because he made 93 confirmed kills during the Vietnam War, though he insists he killed between 300 and 400 enemy troops. He was so deadly that the Vietcong put a price on his head.

His most famous kill occurred near Da Nang, when he hit an enemy sniper through that man’s own rifle-scope. Hathcock’s bullet smashed through the glass and hit the enemy in the eye, killing him instantly.

Hathcock was largely responsible for setting up the USMC Sniper Training Program and has a rifle named after him.

In August 1993, Doug Conley threatened to kill himself with a revolver on a residential street, leading to a two-hour standoff with the police. Conley kept the pistol aimed at his head, so to end it, the authorities called in Plumb.

Plumb positioned himself on his belly some 82 yards away beneath a pine tree. As Conley became more agitated, Plumb’s commander ordered him to shoot. Using his Steyr SSG PII rifle, Plumb managed to hit and shatter Conley’s gun, which was still in the suicidal man’s hand.

In doing so, Plumb saved the man’s life.

Hughes was part of the 2003 invasion of Iraq, when he found two Iraqi soldiers holed up in a bunker half a mile away. Only small portions of their heads and torsos became visible as they moved around their secured position.

To make things worse, the heat was ferocious and the wind was blowing hard. To compensate, Hughes did not aim his L96, 7.62 caliber rifle directly at his chosen target. He instead pointed 38 feet above and 56 feet to the left, hitting one man squarely in the chest and killing him instantly.

In April 2004, Riechert was on top of an oil tank in the city of Lutifiya, Iraq when US Marines on the ground came under fire. Despite being shot at himself, he managed to provide cover for the troops, hitting several of the attackers with his Barrett M82 rifle.

When he saw three insurgents setting up a machine gun behind a brick wall, he switched to an armor-piercing Raufoss Mk 211. Guessing where they might be standing, he managed to hit them all. Then he switched rifles to continue picking off the other, more visible attackers.

Until March 2002, the longest recorded sniper kill in combat stood at 2,286 meters (2,500 yards) by Hathcock in 1968. At least till Perry came along. Fighting for the Canadian Forces, Perry exceeded that shot during the Afghan War.

Perry and his sniper team were part of Operation Anaconda – scouring the Shahikot Valley to take out Taliban and al-Qaeda positions. Using a McMillan Tac-50 rifle, Perry hit an enemy combatant at a distance of over 2,309 meters (2,526 yards), breaking Hathcock’s 1968 record.

The Americans were so impressed, they nominated him for a Bronze Star medal.

Furlong was part of Perry’s team, and the man who beat Perry’s record a few days later. As they scoured the Shahikot Valley, they encountered three al-Qaeda fighters who were making their way to higher ground, so the two sides exchanged fire.

Furlong shot at one of the combatants thrice, while taking on enemy fire, himself. The first one missed the target, the second one hit the other man’s backpack, while the third fatally struck the enemy’s torso.

In March 2004, Kremer set a new record during the Iraqi War. Although the exact details remain unknown, he maintains the longest shot on record for an American sniper as of 2015.

Ranstad set a new record in January 2008 while at Kunar Province in Afghanistan. He was on guard duty, protecting a road crew and shooting at boulders to determine wind speed, temperature, and accuracy.

Looking through his scope, he spotted four Taliban fighters in the distance taking cover. Ranstad fell to his belly and despite his targets falling beyond the adjustable range of his scope, managed to hit one from a distance of 2,092 meters (2,288 yards). The man he hit had broken cover, and because of the distance, couldn’t see where the shots were coming from.

In November 2009, Harrison was fighting against the Taliban in Afghanistan when he came upon two machine gunners outside the city of Musa Qala. Although the light was clear and there was no wind, the gunners were 2,475 meters (2,707 yards) away.

To get his bearings, he fired nine rounds at the men till he felt confident enough to make his kills. With his L115A3 rifle, he fired three consecutive shots – hitting the first man in the gut, the second in the side, and then the machine gun.

A laser confirmed it to be the longest kill to date.