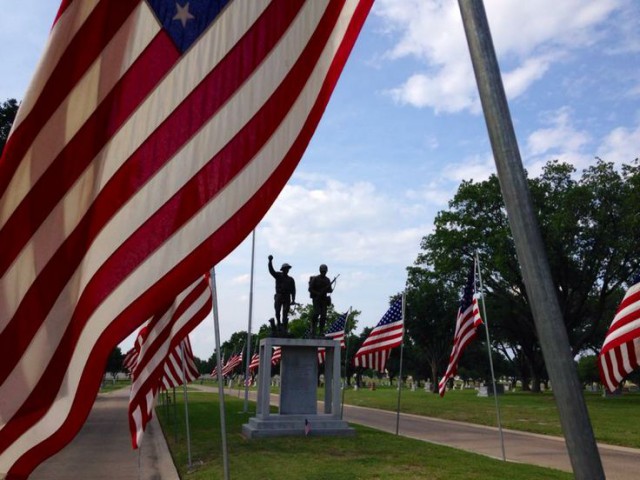 More than sixty thousand souls lay at rest at its central Texas namesake in Tarrant County. Among them are fifty-two men who gave their lives for our freedom in World War II. 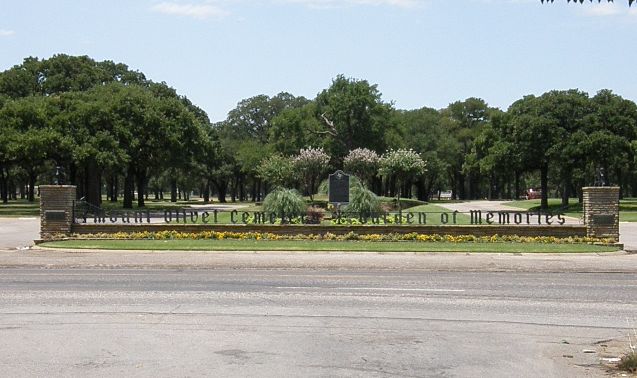 In late 2010, a private citizen – a hospital administrator and local resident, who was no relation to any in the group – contacted me regarding research on a Private Donald Stanfield, a soldier killed in World War II, whose headstone this citizen had noticed while walking through Mount Olivet Cemetery. After I completed the research (we found that Private Stanfield had been killed during the Battle of the Bulge), I was again in touch with my client. 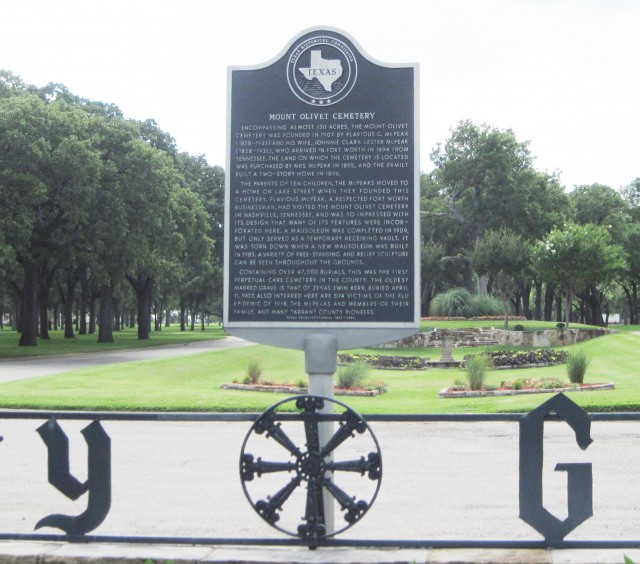 Intrigued, he decided to survey the entire cemetery, and research all the servicemen there who had made the ultimate sacrifice during World War II. Every few months, he would send me a list of eight to ten more names, along with whatever little information he had on each man. There were numerous roadblocks along the way, including misspelled names, confusion over the branch of service, as well as the usual bureaucratic challenges in accessing records for U.S. military war dead from World War II.

A little more than three years later, the project was complete. Here, in chronological order of their deaths, are their stories. 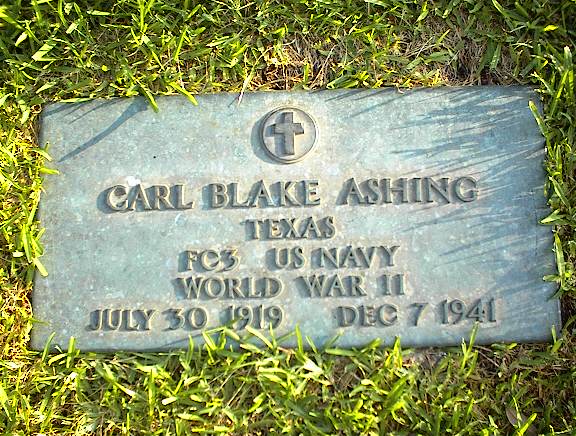 The first man to be lost was Fire Controlman 1st Class Carl B. Ashing, who was killed when his ship, the destroyer USS Pillsbury, was sunk in Manila Bay on December 10, 1941, only three days after the Japanese attack at Pearl Harbor.

Four of the Mount Olivet men died in 1942. The first was Carpenters Mate John L. Howard, of the 16th Naval District. He was killed in a non-battle airplane crash on Mindanao in the Philippines on April 16, 1942. Master Sergeant Odell B. Lee of the 75th Ordnance Company died as a POW of the Japanese due to causes unknown on April 30, 1942, probably on the Bataan Death March.

The next was Private Enrigue G. Tellez. His unit, the 200th Coastal Artillery Command, had been nearly destroyed in the fall of the Philippines, and he was taken prisoner of war. On October 4, he died of disease while held at Camp Carbanatuan. 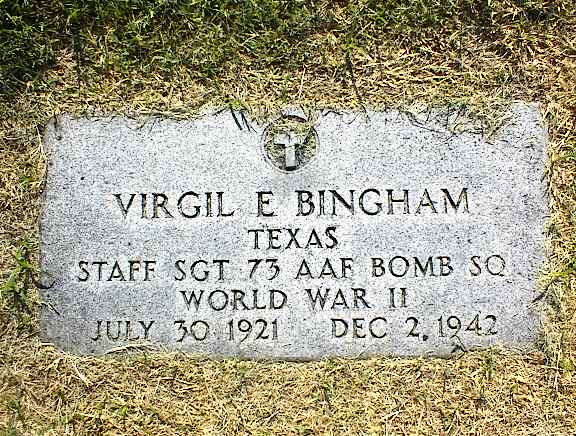 On November 28, Staff Sergeant Virgil E. Bingham, of the 73rd Bomb Squadron, was killed when his personnel transfer flight crashed near Iliamna Lake, Alaska. The final death was Aviation Cadet Charles M. Earle, of Naval Air Training Command. While on a practice flight, he crashed into the Gulf of Mexico on December 24.

The first to die in 1943 was Private First Class Eddie F. Neal, who died of illness at the Air Corps training base at Fort Devens, Massachusetts, on January 31st.

Electrician’s Mate 2nd Class Mark A. Hovenkamp became the second navy man to be killed, when his vessel, the LST-473, was sunk after a Japanese attack off the coast of Morobe, New Guinea, on September 4th. 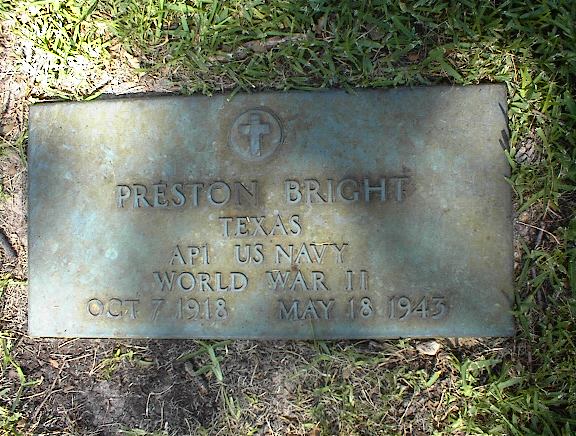 On July 4th, another naval man was killed. He was Aviation Pilot 1st Class Preston Bright, of Naval Patrol Squadron 62. He was killed when his aircraft crashed on Adak Island in the Aleutians. Another naval flyer was killed on September 12, when Seaman 2nd Class Ronald W. Johnston died on a training flight near Corpus Christi, Texas.

The last two deaths of 1943 happened only four days apart. On December 27, 2nd Lieutenant Earl Lanham was the instructor-pilot of a B-17 that crashed in bad weather near Hendricks Field, Sebring, Florida. On the 31st, 1st Lieutenant L.V. Allen, of the 704th Bomb Squadron, became the first Air Corps flyer to be killed in combat when his bomber was downed over Mimizan, France.

1944 proved to be a terrible year for the men of Mount Olivet. On January 17, Air Corps flyer 1st Lieutenant William W. Lane was the pilot of a plane that crashed on an administrative flight to Washington, D.C., near Bearwallow Mountain, North Carolina. On February 21, Private Leonard J. Hall, of the 179th Infantry Regiment, was killed at Anzio, Italy. The next day, Staff Sergeant Oran K. Cannon, of the 515th Bomb Squadron, was downed over Regensburg, Germany. In the Pacific Theatre, Private First Class Blas G. Pacheco, of the 129th Infantry Regiment, was killed on Bougainville in the Solomon Islands, on March 24th.

Two Air Corps flyers were killed in training accidents in May. They were Flight Officer Luther H.L. Hockett, of the 810th Army Air Force Base Unit, killed in glider training at Maxton, North Carolina, on the 2nd, and Aviation Cadet Virgle L. Stephens, killed at Ellington Field, Texas, on the 6th.

One other death occurred in May, when 1st Lieutenant William T. Bright, of the 5307th Composite Group (also known as “Merrill’s Marauders”) died of illness at Margherito, Assam, India on the 18th.

With the D-Day landings, casualties mounted greatly. On the day of the landing, June 6th, two of the Mount Olivet men were killed in France. They were Staff Sergeant Frank R. Johnson, of the 16th Infantry, and Staff Sergeant Milton E. Jones, of the 77th Troop Carrier Squadron, killed in a crash near Etienville. The next day, Private Candelario J. Trevino, of the 508th Parachute Infantry Regiment, was killed in Normandy. Six days later, Private First Class James Toogood, of the 358th Infantry Regiment, was killed there. Two days after this, on the 15th, Technician 5th Grade Alex Polly, also of the 358th, was killed in Normandy. The last deaths in France occurred on August 25th, when Private Larry J. Ducote, of the 509th Parachute Infantry, was killed in action at Theoule, and on October 1, when 2nd Lieutenant Harry P. Curl, of the 313th Infantry, was killed at Foret de Parroy.

Meanwhile, the war continued outside of France. On June 13, 2nd Lieutenant Dennis H. Griggs, of the 831st Bomb Squadron, was shot down 10 miles east of Munich, Germany. On July 25th, 2nd Lieutenant Gene M. Youngblood was killed when his aircraft, preparing to fly overseas, crashed into San Pablo Bay, California. 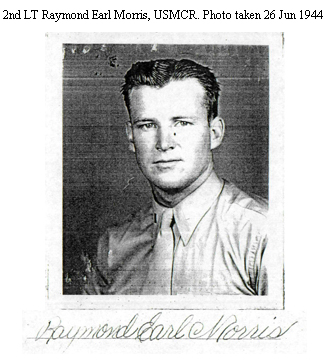 In another non-combat death, Marine 2nd Lieutenant Raymond E. Morris was killed in a mortar-training accident at Quantico, Virginia, on August 8th. On the 16th of the month, Major Thomas F. Vickers was killed on a maintenance test flight near Patterson Field, Ohio.

The next month, 1st Lieutenant Harry L. Steinsultz, of the 767th Tank Destroyer Battalion, died of wounds in Hollandia, New Guinea on November 7th. The last death in the Pacific area happened on December 2, when Staff Sergeant Joseph R. Cheek, of the 675th Bomb Squadron, was killed when his plane crashed on Noemboor Island, New Guinea.

Three of the men died in December. On the 2nd, Private Louis Gosson, Jr., of the 405th Infantry, was killed in action at Waurichen, Germany. On the 29th, Technician 5th Grade Thomas J. Block, of the 338th Field Artillery Battalion, was killed at Frassineta, Italy. Two days later, Private Donald W. Stanfield of the 393rd Infantry, was killed during the Battle of the Bulge at Krinkelt, Belgium.

The last three deaths in the European Theatre occurred in March and April. On the 8th, Private First Class Earl D. Wynns, of the 311th Infantry, was killed at Unkel, Germany. On the 22nd, Sergeant Billy J. Irwin, of the 783rd Bomb Squadron, was downed over Vienna, Austria. The last death in this area occurred on April 1, when 1st Lieutenant John F. Frazier, of the 61st Fighter Squadron, was killed in a training crash near Steeple, Essex, United Kingdom.

In the Pacific, the War continued to its ultimate crescendo. On February 19th, Private Edmund T. Sorrells, Jr., of the 27th Marine Regiment, was killed on Iwo Jima. 11 days later, Private First Class Harvey A. Lee, Jr., of the 5th Marine Division, was also killed there.

The last two of the Mount Olivet men to die in World War II were also lost on this Pacific island. On May 3rd, Technician 5th Grade Wallace R. Turner, of the 361st Field Artillery Battalion, was killed near Fuenzan; the next day, Hospital Apprentice Mate Minter G. Anderson, Jr., attached to the 5th Marines, met his end.

Once the project for the men of the Mount Olivet was complete, my client visited nearby People’s Burial Park, a segregated cemetery where African Americans were interred. He located five men killed in World War II that were buried there, and asked me to research them, as well.

The first of these men to die in World War II was Private James L. Brooks. He was serving with the 4185th Quartermaster Service Company when his unit was strafed by German aircraft near Leon, France, on December 26th, 1944.

Two were killed in February of 1945. The first was Staff Sergeant Rubin J. Wheat, of the 365th Infantry, killed near Monte Lama, Italy, on the 5th. Three days later, Sergeant Eubie E. Lawson, of the 370th Infantry, was killed in action near Strettoia, Italy.

On April 21, 1945, Private First Class Lawyer T. Edwards, also of the 370th Infantry, was killed near Poeri Petroganamo, Italy. The last to die was Private First Class Osborne Haggerty, of the 2805th Engineer Service Battalion. He was killed on October 18, 1945, months after the war ended, in a truck accident on the island of Saipan.

Correction: An earlier version of this article featured famed WAFS flyer Cornelia Clark Fort as being buried in Mount Olivet Cemetery in Fort Worth, TX. Cornelia Fort was from a prominent family from Nashville, so I asked my readers if anyone knew why she was buried in Texas. Thanks to reader David Braeutigam who pointed out that Cornelia Fort is buried alongside her parents in Mount Olivet Cemetery in Nashville, TN. You can read a new article dedicated to Cornelia Clark Fort here.