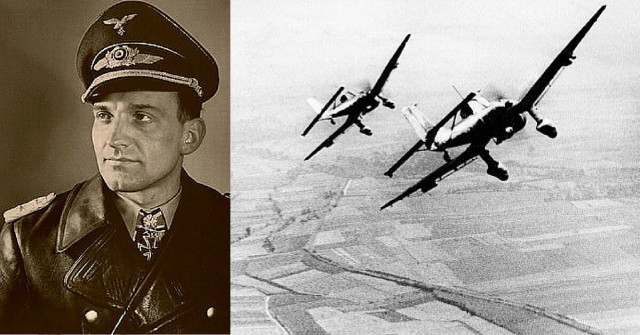 The 20-year-old Silesian pastor’s son, Ulrich Rudel began his pilot training for the German Luftwaffe in 1936. Rudel volunteered for the new dive-bombing Stuka formations but started off as only an average pilot. His clean living, exercise and tea-toddling, further ostracized him from the hard-partying pilot culture. No one at the time, could have imagined the extraordinary combat career that lay ahead of the odd-ball Rudel.

With Operation Barbarossa, the German invasion of Soviet Russia on June 22, 1941, Rudel was finally given a chance to show his mettle. By this time, Rudel’s flying skills and gunnery had improved greatly. Rudel was in the air from 3 am to as late as 10 pm, supporting the advance of Army Group Center into Belorussia.

In September 1941, Rudel’s Stukageschwader 2, the “Immelmann” Wing, joined Army Group North’s siege of Leningrad. It was here that Rudel would leave his first mark in military history. The Stukas’ targets included the Soviet battleships, cruisers and destroyers, which laid down devastating support fire for the defenders of the city. The fleet was based out of the island of Kronstadt, 12.5 miles from the harbor of Leningrad in the Gulf of Finland.

When on the 16th reconnaissance spotted the battleship Marat in open water, the whole Stuka wing, some thirty aircraft, were ordered to attack in the foulest weather. With anti-aircraft fire bursting “like the clap of doomsday,”¹ the Marat appeared through a gap in the clouds. Rudel followed Hauptman Ernst Steen into the attack. Steen’s bomb was a near miss; Rudel’s was dead on. His thousand pound bomb hit the deck which erupted in flames. AA fire followed Rudel’s Stuka back into the clouds. Later it is confirmed that the Marat survived, lying in repair in heavily defended Kronstadt harbor. Rudel saw red.

Braving a gauntlet of enemy fighters and ultra heavy AA, Rudel followed Steen into the another attack on September 22nd. This time Rudel dove to within 900 feet. Rudel was so absorbed with hitting his target that he forgot that the new 2000 pound bomb he released had a fragmentation effect of 3000 feet!

“The ship is centered plumb in the middle of my sights. My Ju 87 keeps perfectly steady as I dive; she does not serve an inch. I have a feeling that to miss is now impossible. Then I see the Marat large as life in front of me. Sailors are running across the deck, carrying ammunition. Now I press the bomb release switch on my stick and pull with all my strength.”²

Rudel momentarily blacked out, tugging at his stick. He regained consciousness at the sound of his rear-gunner Scharnovski’s voice, “she is blowing up, sir.”³ As Rudel’s Stuka skimmed ten feet above the water, he thought of the “thousands of grateful infantrymen.”4

Rudel continued his sorties over the Gulf of Finland, adding a cruiser to a prior destroyer and the battleship Marat. He nearly added a second battleship but his 2000 pounder failed to explode on target. Rudel’s sinking of the Mara was only one of his many exploits that would make him a legend in military history. During his 2530 combat missions, unmatched by any pilot, Rudel destroyed 547 tanks and 2,000 ground targets. Field Marshall Schörner did not exaggerate much when he praised Rudel as being “worth an entire division.”5