The Battle of Sutjeska (known as the Fifth Enemy Offensive in the Yugoslav historiography) was a German operation against Partisans Main Operational Group in the Second World War. The German code name for this operation was „Operation Case Black“ (German: Fall Schwarz).

This operation took place between15th of May and 16th of June 1943 and was aimed at destroying the main Yugoslav Partisan force, near the Sutjeska River in the southeastern Bosnia. The failure of the offensive marked a turning point for Yugoslavia during World War II. 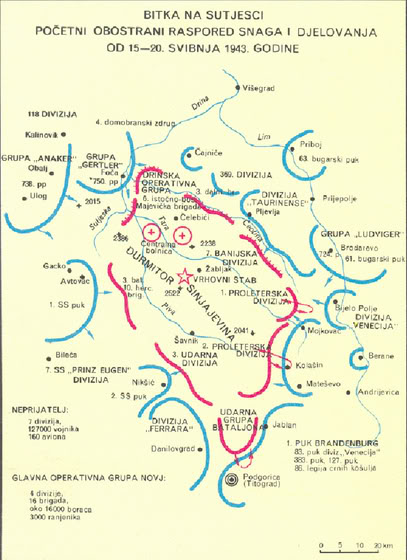 The operation Case Black immediately followed the collapse of Operation Case White, which had failed in accomplishing the same objective: to eliminate the central Partisan formation and capture their commander, Marshal Josip Broz Tito.

The Germans were temporarily suspended from further activities against The Main Operational Group (MOG) after the failure in the Battle of Neretva, but they followed the progress of MOG to the east. 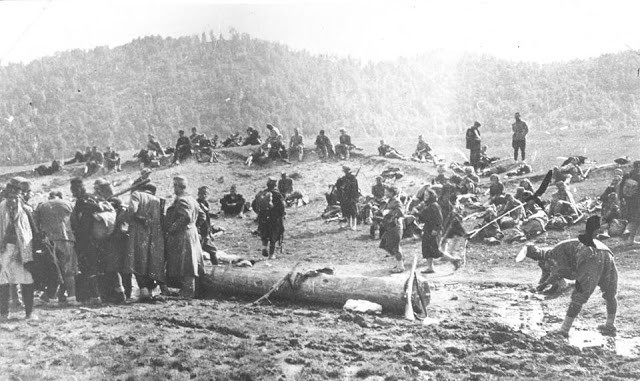 In mid-April 1943, the German command made a decision to launch a new offensive against MOG with a code name “Fall Schwarz”.

„Units are obliged and authorized to use every mean in this battle, without limits and against women and children as well if it leads to success… No German who fights against gangs can be called to disciplinary or military-judicial responsibility for staying in the fight against gangs and their supporters.“

Hitler’s orders prior to the Operation Fall Schwarz

Immediately, in strict secrecy, they started preparing and moving units that were to participate in the operation on the Partisan Free territory controlled by MOG.

During the Operation Fall Schwarz, the Germans intended to encircle MOG and thus destroy the Partisans between Piva and Tara rivers.

The Independent State of Croatia

In total, 127.000 troops, 8 artillery regiments, tanks and squadrons with about 300 aircraft were engaged in the offensive.

In total, they had 16 brigades and two artillery battalions with around 15.700 soldiers and about 4.000 wounded and suffering from typhus.

The Beginning of Offensive

On the morning of May 15, the movement and actions by the Axis powers against the Partisan free territory began. During first five days, theGermans achieved significant results.They succeeded to discard the unit of MOG near Gorazde and Čajniče and thus threaten the Central Hospital.

By May 20, there was a lull at the front, kept by the 7th Banija division. The Italian units did not launch an offensive against the 7th Banija Division.

After two days of fighting, the 1st Mountain Division from the direction of Kolašin forced the1st and the 2nd proletarian divisions to retreat to the north.

The 7th SS Division was moving towards Gacko and Nevesinje and they reached these cities after five days of fighting.

During the first five days of fighting, thePartisan Headquarters recognized the intention of the German command. Therefore, they took countermeasures for offensive operations and ensured the exit from encirclement.

Attempt to Break the Encirclement near Foča

Until May 21, the Germans almost closed the ring around MOG, but their units were quite dispersed.

On May 22nd, the 1st Proletarian Division managed to defeat the German and Home Guard units near the village of Čelebići and thereby eliminate the immediate threat to the Central Hospital.

After 10 days of fierce fighting, the German forces did not achieve the operational objective, but MOG was also unable to break the encirclement.On May 24, the 1st Proletarian Division performed a general attack on the positions of the 118th Jager Division.

After two days of fighting, the 1st Proletarian Division failed to break through the encirclement near Foča. After this failure, the 2nd Proletarian Division managed to conquer the Vučevomountain range. Vučevo had an important strategic role. Whoever kept Vučevo, also controlled the valley of Sutjeska. 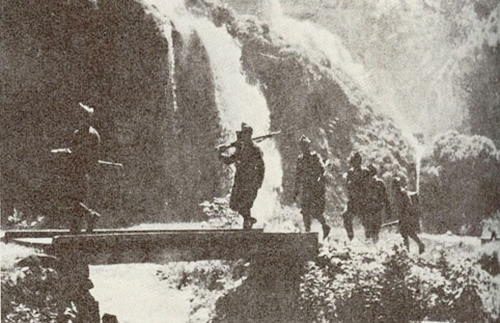 Shortly after, all units were ordered to move towards the valley of Sutjeska. During these movements of the Partisan units, the German Battle Group „Anaker“ was trying to take control of the Vučevo mountain range. The Battle Group „Anaker“ made a number of violent attacks, but after several unsuccessful attempts they had to withdraw. 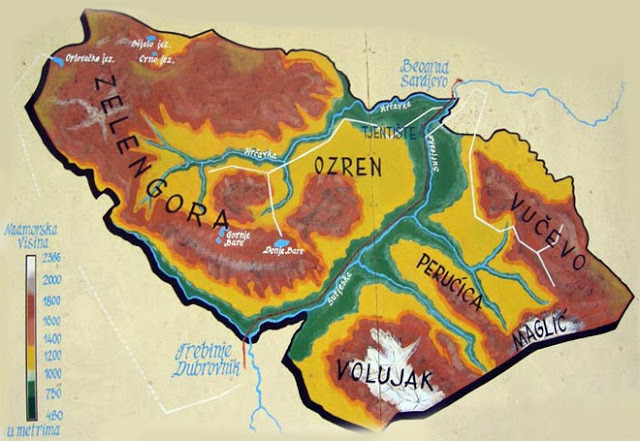 The regrouping of Partisan units was completed on May 31 and the Supreme Headquarters decided to expand the bridgehead of Sutjeska.

On June 3, the Headquarters decided to break through in two directions:

Breakthrough the Encirclement on Zelengora

On the morning of June 9, Marshal Josip Broz Tito was wounded after a fierce bombardment.Head of the British Military Mission Captain Stewart was killed in the same attack

Prior to the beginning of the main fight, an order was issued to bury all heavy weapons, burn archives, and slaughter all horses in order to feed soldiers.

„I remember well. DaniloLekić commanded: ‘The 1st proletarian – onslaught!!’ And, probably, I believe that was the only time when the entire 1st Proletarian stormed. Across that clearing. We were all in the same firing line. For the first time, all of us… All troop commands, all battalion staffs and the brigade staff, and the Spaniard (DaniloLekić), and the Blue were storming, and all the couriers, all chefs, all paramedics… Everyone came out, all of us who were there. We headed off. And we all knew: there is no going back. We must break through…“On the evening of June 9, the 1st Proletarian Division started the general onslaught.

AntonijeIsaković, one of the fight participants

On the same evening, the first group joined the 7th Banija Division with 600 wounded, and the fate of the 3rd Shock Division with heavy casualties was extremely uncertain. 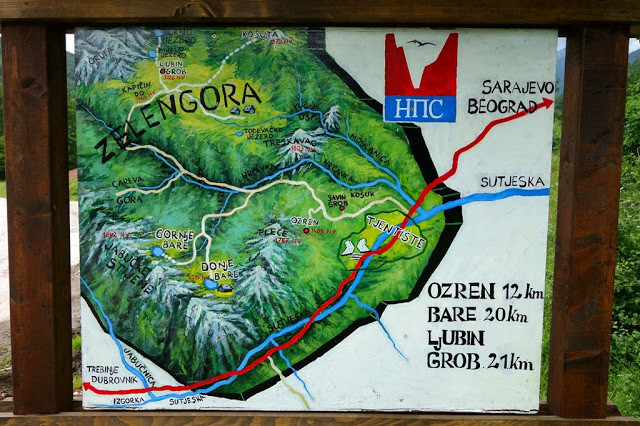 The Germans thought that only smaller units broke through across Sutjeska and that the majority of Partisan forces are still in the encirclement. Therefore, they engaged nearly five divisions against the 3rd Shock Division.

On June 13 in the morning hours, the 3rd Division launched a general attack on Tjentište. The soldiers literally stormed towards the German trenches, but around noon, the attacks started becoming weaker and weaker.

The commander of the 3rd Shock Division Sava Kovačević was killed in those first onslaughts on the German trenches. The 3rd Division was broken and only soldiers in small groups continued to break through.

On June 14, the German units killed around 1.200 wounded Partisana. They were discovering Partisan groups with the help of dogs, following the tracks, combing valleys, forests, and caves. The majority of the wounded Partisans (around 700) hid on the Piva Mountain, together with nurses.

However, the Germans searched fields with dogs and executed almost all of them, together with the nurses. The German report said they were all killed because most of them had been infected with typhus.

The majority of the discovered Partisans (exhausted soldiers and the wounded) were killed by the Germans on the spot. Summary report of the 1st Mountain Division for June shows that 498 Partisans were trapped in the area of their unit only, of which 411 were executed.

The Battle of Sutjeska ended after a month of fierce fighting and it represents one of the most dramatic battles of the National Liberation War. During this battle, the Main Operational Group lost one-third of its manpower. 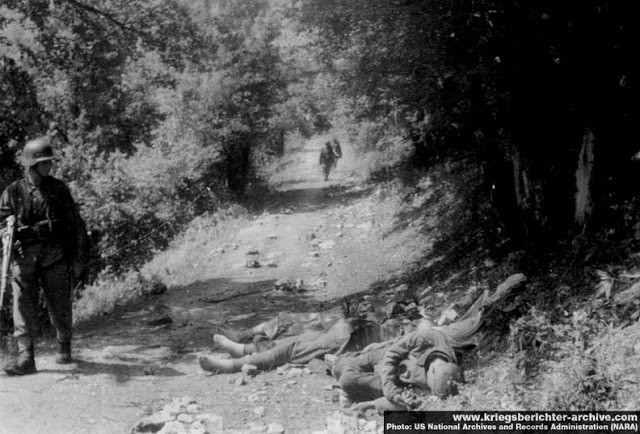 Losses of the MOG:

The Head of the British Military Mission Captain Stuart was killed during the Battle of Sutjeska.

The Battle of Sutjeska was a strategic turning point in the Yugoslav battlefield. The Germans gave up on the tactic “surround and destroy”.

One year after the battle, in August 1944,a partisan unit passed through the valley of Sutjeska. The scene looked like this:

Signs of terror, on the road in front and around us, turn the movement of the column into a touching commemorative march. In the forest – skeletons: one… a little farther the second, the third… In the rowlock of a tree is a skeleton with the cobweb of bandage over the skull… Rains and winds spare fabric and human bones the longest. Two skeletons with the gray cobweb of bandage on the leg and across the chest. A skeleton without a leg, with a shattered skull. The bandage is on the bent leg, the head is without the bandage. That one was perhaps still alive when the Germans found him…

The 3rd Division was able to break through in several directions, in whole or in smaller sections. However, according to the tradition of the National Liberation battles, they were trying to rescue the wounded and thus exposed themselves to direct destruction, for it was not acceptable in any way to leave the wounded to the enemy who did not respect the Geneva Convention.

Neither the Supreme Command nor the Headquarters of the Third Division lost sight of this great moral and political fact and partisan military and human obligation.