A visit to Normandy gives a real sense of WWII, the impact of D-Day and the devastation that occurred once those brave young allied soldiers stepped onto the sands of Normandy that fateful morning.

Today Normandy is rebuilt. Well-manicured roundabouts welcome visitors into beautifully rebuilt towns and villages, informative museums are numerous, a walk through the cemeteries will leave a lasting impression of the lives lost during WWII (and WWI), and a stroll down the D-Day beaches is haunting.

But come to the water’s edge and look over the waves off Normandy, for just below lies the remains of the largest maritime invasion in history, this hidden battlefield lies on the seabed off Normandy frozen in time and is slowly sinking into the sands of history.

The points of wrecks and wreckage lying off the coast of Normandy runs to well over a 1000, below the waterline troop carriers, cargo ships, hospital ships, LCT’s, Tanks, destroyers, minesweepers, Mulberry harbours etc all lie as they sank over 70+ years before.

To dive in Normandy is to dive straight into history.

One of those mighty ships was the U.S.S. Susan B Anthony. The U.S.S. Susan B Anthony was built at the New York Shipbuilding Company in New Jersey and was launched in 1930, the first days of her career she spend as a passenger/cargo liner, the S.S. Santa Clara.
On the 7th of August 1942 she was transferred to the U.S. Navy where she was converted into a troop carrier in preparation for the vast number of soldiers that she would carry safely around the world to the front lines of war.

Renamed the Susan B Anthony she started her very active service for WWII, she took part in several trips to North Africa loaded with troops and equipment and also in the campaign against Sicily (August 1943). 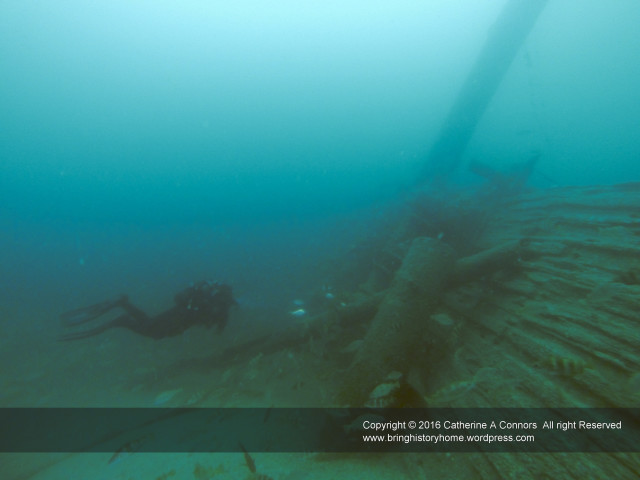 From that point, she spent the next 10 months travelling between England and the US transporting troops and supplies in preparation for Operation Overlord.

Her final voyage started from Newport, UK loaded with 2,288 troops and crew on board to cross the channel in the direction of Omaha Beach. Making her way under the cover of darkness that fateful morning of the 7th of June, 1944 she struck a mine at 8.20am under the No. 4 hold. 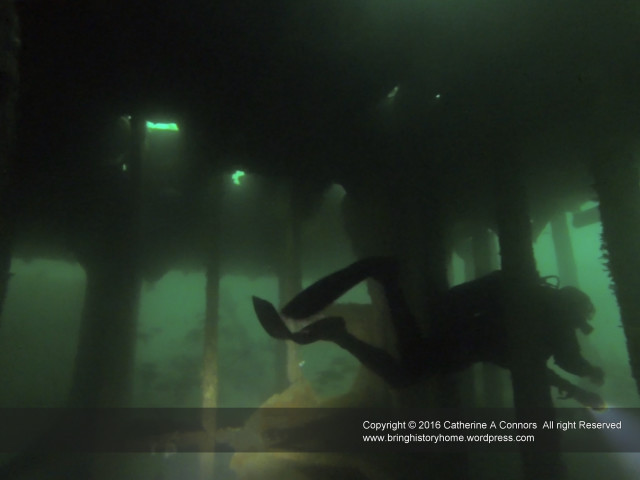 With the ship taking an immediate eight-degree list to starboard the quick thinking Commander T.L. Gray ordered the troops to move to the port side which brought the ship onto an even keel. The men were ordered to prepare themselves for entry into the water and many of the troops stripped themselves of heavy equipment and their boots.

An American tug arrived in the hope of towing the ship to the safety of shallow water but a fire in the engine/fire rooms made this impossible, a firefighting tug came alongside to try and control the fire, and hopefully allow enough time for the troops and crew to escape onto a landing craft.

Less than 2 hours later, at 10.10am, the Susan B Anthony lost her grip on the surface and dropped below the waves off Normandy to her final resting place. She didn’t take a single soul with her and is one of the few wrecks off Normandy that sank with no loss of life. The troops then made their way to the beaches, re-kitted themselves from those who had died there and went to war.

This gentle giant lies at a depth of 26 to 30 meters in two pieces, she rests off shore approximately 7 and a half miles North of Port en Besson. 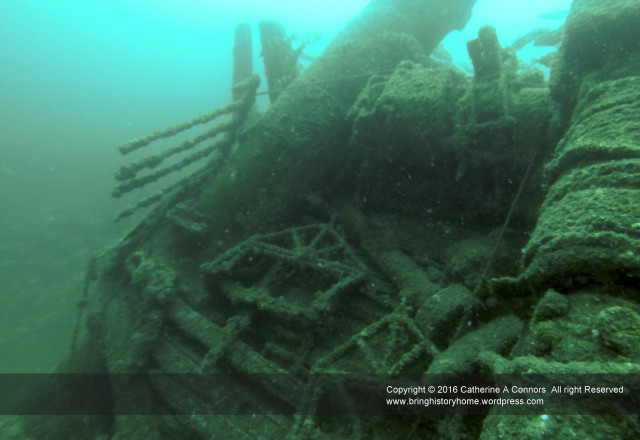 The bow section is still in excellent condition with the teak decking and portholes along the Hull section still intact and in good condition, the Stern section is separated and lies at an angle to the main body of the wreck. Several of the anti-aircraft guns are still visible along the length of the wreck with plenty of 20 mm shells littering the seabed. 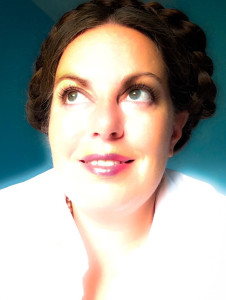 Catherine A Connors is a French Federation Wreck and Archaeology Diver, photographer and history nerd residing in Normandy, France – a long way from Tipperary, Ireland, where she was born and raised. Bring History Home