A young man reading one of the magazines like Boy’s Life or Popular Science in the 40s or 50s might have come across an exciting advertisement. ‘Army Surplus Jeeps. Only $50’.

All you had to do was send away $20 (about $200 the US in today’s money), and you’d be given a good deal on a Jeep or another piece of army surplus equipment!

Sounds too good to be true? That’s because it wasn’t. It was a scam. The scammers weren’t buying Jeeps for people. Rather they were sending pamphlets with information on how to bid at government auctions. And the same information was available from the U.S. Government for free! And even then, very few complete Jeeps were available for sale. Most Jeeps were scrapped, leaving only spare parts for sale.

But who would want a Jeep anyway? They carried a 1/4 ton, they were a four-wheel drive vehicle. Nevertheless, it was advertised as a great boon to civilians. With the end of the war in sight, Popular Science began encouraging the market for surplus Jeeps by running a contest in March 1945.

The magazine encouraged readers to offer their ideas on the theme ‘how I’ll use surplus goods’. It was suggested that the Jeep could be a tractor, a power generator, a truck, a pick–up. Everyone had to have a Jeep! And they have become very popular with civilians, both for work and recreational use, right up to the present time.

But it wasn’t army Jeeps that answered the demand, but rather Jeeps designed for civilian use. The first CJ, or Civilian Jeep, was produced in 1941 and was called the CJ2A. And Jeeps like the Wrangler and Cherokee are popular as family vehicles nowadays. 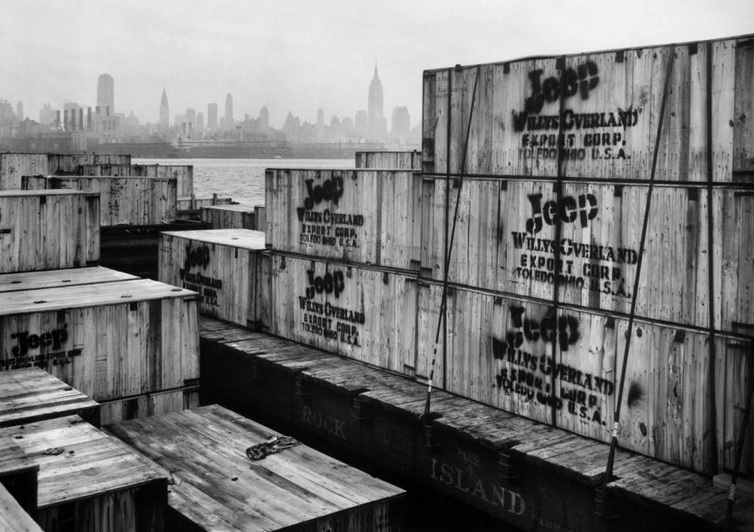 Of course, the Jeep wasn’t built for civilians. It had an important military purpose. The military needed a tough vehicle that could carry heavy loads, pull heavy objects and move quickly over rough ground. 648,000 Ford GPW’s and Willys MB’s were built during World War II – 15 percent of military vehicles produced were Jeeps. The Jeep was used by every branch of the U.S military, with an average of 145 assigned to each infantry regiment.

But to return to these old advertisements – they promised that they would send you in a Jeep boxed up in a crate. How did they get that to work? Well, it didn’t. Again, it was a scam to try and get the reader’s money. It is true that the Army did crate complete Jeeps for shipment to U.S. forces and countries like Britain and the Soviet Union. However, it was a costly and time-consuming exercise which was done only when necessary.

It is doubtful if any crated Jeeps remained in the United States to be sold to civilians after the war. Dealers and organizations have offered substantial amounts of money for anyone who can produce a Jeep in a crate. So far, no money has changed hands.

So if you do want a Jeep, you’d be better off going to your local car dealer.