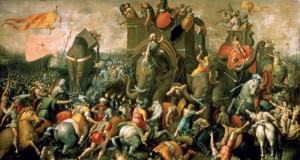 Many years after their last battles had been fought, Hannibal Barca and Publius Cornelius Scipio came face to face in the neutral city of Ephesus, on the then Greek shore of what is today Turkey. The generals had long since proven too colossal for the mundane, day to day politics of their respective home towns – Carthage and Rome. The two greatest cities in the west were too small, even too human, for the near divine status of men that had decided the fates of entire nations and peoples during the Second Punic War.

At their meeting, the first since the decisive Battle of Zama a decade before, the old adversaries found that they got along very well, and there was much reminiscing and sharing of hitherto unknown information from both sides. 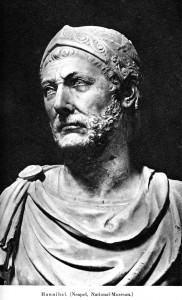 The traditional image of Hannibal Barca – The Terror of Rome

Now bemused at being left out of the ranking, having defeated Hannibal himself, Scipio asked Hannibal where he would rank if he had won the day at Zama. Hannibal replied decisively that had he defeated Scipio that day, he would then put himself in the first place, above either Alexander or Pyrrhus. Scipio took this as the compliment it was intended to be and they parted ways as friends. 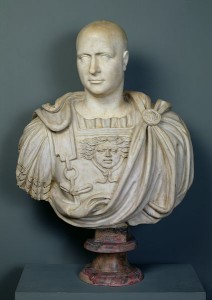 In the understated and subtle way of the Carthaginians, much as he fought his battles and campaigns, Hannibal had paid Scipio the ultimate tribute, for he had made it clear that he held Scipio outside the normal run of military commanders and in another league entirely, even above Alexander the Great. 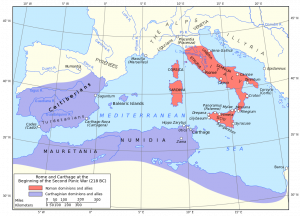 Throughout their lives, Hannibal and Scipio shared other similarities in addition to their youth, daring, and early prominence. Both of their fathers had made them swear a holy oath that they would never abandon the cause of their homeland to the advantage of its mortal enemy – Hannibal after the Carthaginian defeat in the First Punic War, and following the catastrophic defeats that Hannibal subsequently inflicted on the Romans at battles like Trebia, Lake Trasimene, and Cannae in the Second Punic War, Scipio swore a similar oath to his own father, who was then mortally wounded in battle with Carthaginian forces in Spain. 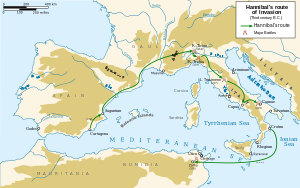 Scipio was present at those early battles as a rising junior officer, and his bravery and stalwartness following each defeat won him many admirers. With Hannibal still running amok in Italy, but crucially unable to invest Rome itself due to the tactics of Fabius Maximus, known by some as “the delayer” and by more complimentary observers as “the shield of Rome”, the Roman Senate decided to shift the focus of the war to the supply grounds of their enemy, and Scipio was dispatched at the head of an army to Spain, reputedly the only man to actually volunteer to do the job.

This pivot was to prove decisive, as Scipio began to do in Spain what Hannibal had been doing for years in Italy. He decisively defeated Hannibal’s brother, Hasdrubal Barca (who had led the forces that killed Scipio’s father), and won over many of the Spanish tribes with his benevolent and liberal attitude. Hannibal, now unable to receive supplies either from the Carthaginian bases in Spain or in North Africa, was soon completely cut off in Italy and leading a host that was steadily losing irreplaceable veterans with every skirmish and ambush. 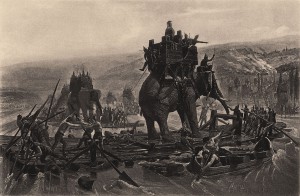 Hannibal’s crossing into Italy via the south of Gaul and the Alps was an exceptional act of generalship, but in fact less than 10 of his elephants survived the journey. Interestingly, the Romans would later use elephants themselves for their invasion of Britain in 43 A.D.

Scipio’s reputation rose even further and he was next granted the governorate of Sicily, where he made it clear that he would launch an invasion of the city of Carthage itself. This he did, against the wishes of the majority of the senate, and Hannibal was recalled by his own senate to deal with the threat of a war that was suddenly very close to home.

The two sides met on the plains of Zama, south of Carthage and east of the city of Leptis Minor, and Hannibal came face to face with Scipio for the first time in a pre-battle conference. Neither leader could agree on a mutually satisfactory truce or settlement at the talks, so battle was allowed to proceed. 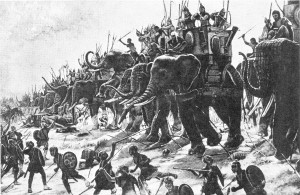 Hannibal commanded scores of war elephants at Zama, but though they were still magnificent, their impact on the Romans had long since lost the power to terrify

Hannibal’s tactics at Cannae had relied on cunning and subterfuge, but at Zama he abandoned all pretence of artful manoeuvring and instead commanded on an all-out charge to steamroller the Roman army from the field. Sources say that he had upwards of 80 war elephants to do this for him, but it was clear from the outset of the clash that Roman tactical expertise had evolved from the blundering of the war’s early stages. Scipio set his ranks far apart and also dug hidden traps in front of the line for the elephants’ advance; in addition, when they came within the firing range of the Roman center, loud trumpets were blown to disorientate the animals. Those that didn’t fall victim to the spikes of the traps or panicked at the sound of the horns ran harmlessly through the avenues that the legionaries opened in the lines and were then dealt with in the rear.

Scipio had also ensured that the Roman cavalry was the match of the Carthaginian at the battle, both in numbers and in skill, and Hannibal was forced to watch as all of his usual advantages melted away. The deciding factor of the battle became the contest between the infantry of the two sides, and here the Romans were in their element. Once Scipio’s cavalry had ran the Carthaginian from the field, it wheeled back and attacked the enemy infantry’s rear, smashing it against the invincible Roman shields at the front. Hannibal, so long thought to be unbeatable, had been thwarted, and Carthage’s fate was sealed.