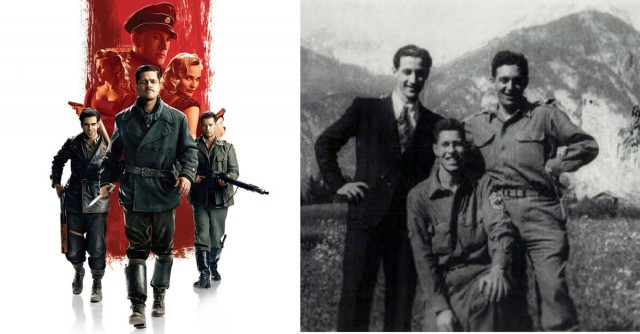 Quentin Tarantino’s 2009 war film was partly based on a real story. During WWII, some Jews really did volunteer to go into Nazi-occupied Europe to engage in espionage and sabotage. Unlike the strange and often idiotic Tarantino’s movie, however, the truth was far more bizarre.

How bizarre? Imagine a Jew helping Nazis surrender peacefully to the Allies. And that was after they had tortured him.

Friedrich “Fred” Mayer’s father was a decorated war veteran for his distinguished service to the German Empire in WWI. Then the Nazis came to power. Being Jewish, the senior Mayer’s status couldn’t protect them, so the family emigrated to the US in 1938.

On 7 December 1941, the Japanese bombed Pearl Harbor, forcing America to enter the war. The next day, Mayer tried to enlist, but the military said “no.” He was German, after all, and, therefore, an enemy alien.

But America desperately needed to beef up its military, so they let him join the 81st Infantry Division the following year. Mayer became an Army Ranger and went on to join the Office of Strategic Services (OSS) – the precursor of today’s CIA.

Sent to Italy, he was teamed up with Hans Wijnberg – another Jewish-American whose family was thrown into Auschwitz. There was also Franz Weber – a Catholic Austrian Wehrmacht officer and POW, who felt loyal to Austria, not to Nazi Germany.

Mayer was given command of Operation Greenup – charged with finding out how weapons were making it into Italy, then an Axis power. They found that Germans were using movable bridges on the Brenner railway that they hid in tunnels by day and used only at night. Thanks to their intelligence, the Allies were able to bomb over 25 supply trains trying to get into Italy. Greenup also discovered Hitler’s location, as well as that of Mussolini.

Their most daring operation, however, involved finding the Alpine Redoubt in Austria – a fortress where the German government could supposedly retreat to in the event of defeat. Though it turned out to be a myth created by fanatical Nazis, the Allies couldn’t have known that at the time.

Mayer, Wijnberg, and Weber were parachuted with their supplies into Austria on 26 February 1945 in total darkness… which was why they ended up on the crest of the Sulztaler glacier some 9,000 feet up a mountain. Though they managed to retrieve most of their supplies, their skis were another matter entirely, forcing them to climb down in waist-deep snow.

Exhausted, they finally sledded their way down, something Mayer later claimed was the scariest part of the mission. Reaching the glacier’s foot, they holed up for three days at the Amberger hut (their original target) as they went over their plans. Then they boarded a Gestapo-infested train bound for Innsbruck (a major rail hub) where they were asked for their papers.

As if offended, Weber haughtily replied, “We’ve already been checked!”

Not wanting to mess with a Wehrmacht officer, the inspector moved on. The trio got off at the town of Oberperfuss near Innsbruck and split up. Weber stayed with his family, his fiancée’s mother took Mayer in, and Wijnberg stayed at a neighbor’s house.

Weber’s sister, Louise, was a nurse who gave Mayer the uniform and documents of a recently-deceased German officer. Modifying the papers so that Mayer’s picture appeared on it, he moved into her hospital to “recover.”

His alias was established so he then moved into the officer’s barracks, where he sent information to Wijnberg, the team’s radio operator. Thanks to his Intel, the Allies knew the schedules of troop and munition trains and bombarded them accordingly.

In April, Mayer’s superiors needed info on an underground factory that made jet engines. He, therefore, transformed himself into a French electrician. Claiming to be on the run from the advancing Soviets, he got a job at the facility.

In mid-April, a black marketer whom Mayer dealt with was caught up in a Gestapo dragnet. Under torture, he told them about Mayer, so they broke down the latter’s door on 20 April 1945. Fortunately for Weber’s fiancée and her family, Mayer had found other lodgings before being captured.

They tortured him brutally, but he didn’t break. And although he was circumcised, the Gestapo thought nothing of it since many non-Jews also practiced circumcision. It did convince them that he was a spy since they knew most Americans were circumcised at birth. It wasn;t until they brought in the informant that Mayer finally admitted he was an American agent, but insisted that he worked alone.

Enter Hermann Matull. A German soldier, Matull had deserted and was caught by the Allies who threw him into a POW camp. He then worked for Mayer till the Gestapo caught him. They showed him a picture of Mayer’s ruined face, but Matull was a world-class hustler before the war.

His eyes grew wide, “You’re all as good as dead!” he gasped, shaking his head in disbelief.

“That man’s a bigshot in the US Military. The Americans will slaughter everyone who did this!”

Considering how the Gestapo worked, they believed him.

Matull insisted that only someone as important as Franz Hofer (the local administrator) could get away with interrogating Mayer. Fortunately, Hofer realized that Germany would lose and wanted to save his skin, so he ordered Mayer brought to him.

The Nazi governor wined and dined his Jewish captive, then explained that he wanted to surrender – but not to the Soviets.

When the American 103rd Infantry Division of the Seventh Army closed in on Innsbruck on the morning of 3 May 1945, they were met by a car sporting a white bedsheet. Out jumped a bruised and battered Mayer, who offered the formal surrender of the entire region’s German Army.

Thinking he wanted revenge, the Americans later brought Mayer to a cell. Inside was the officer responsible for his “interrogation.”

“Do what you want with me,” the man pleaded. “Just don’t hurt my family.”

Mayer was disgusted, “What the hell do you think we are? Nazis!?”

Then he walked out.

The GIs were not so merciful with the Gestapo, however, especially as some them were Jews. So Matull hadn’t entirely lied

For his bravery, Mayer received the Legion of Merit and a Purple Heart.