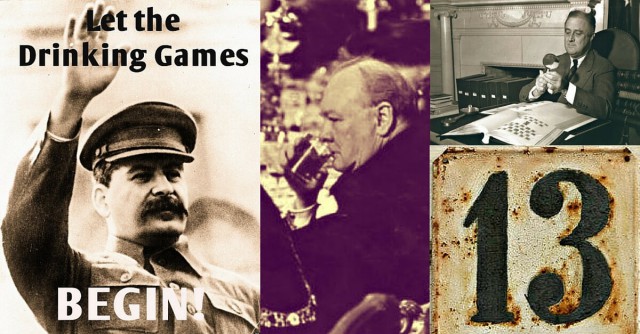 Admit it, finding little-known funny, eccentric and odd habits, obsessions and facts about men who carved their places in history is both amusing and interesting.

Hitler had a massive library with books, reportedly, numbering to 16,000! While a great percentage of his library remained unread, Hitler was a voracious reader and when he did, he really applied himself to the task to the point of underlining passages that took his fancy. His reading interests was quite eccentric, too, and ranged from Shakespeare’s works to Uncle Tom’s Cabin. But there was one author Hitler held in high regard above the rest — the German western fantasy tale weaver Karl May. 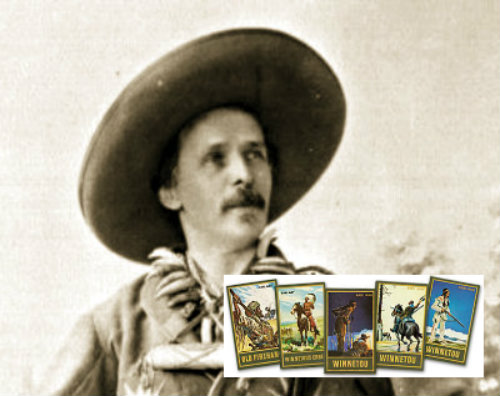 The German dictator got introduced to May’s western adventures as a child and got hooked since then. Hitler even went on to declare that May’s books fed his interest in geography and history even though the author himself had not set foot in America while writing his stories.

While fanning for a certain author is very common, Hitler insisted that May’s western-themed books be read as they could help Germany win WWII put the ODD to this one.

According to him, the Apache chief Winnietou in May’s tales was a model of bravery and nobility worthy to emulate and that German soldiers must carry May’s books [called Indianerbucher] and read them to learn from him.

Finally, in spite of Germany having a paper shortage in 1944, Hitler still wanted to print 300,000 Karl May books with the reason that as Russians fought like Native Americans – hiding behind bushes and trees and going for surprise ambushes – German soldiers should study the novels particularly Old Shatterhand, who was a cowboy in May’s works, to defeat the enemy.

– He, reportedly, was a fan of Disney.

While we may never know if this “allegation” is true or just a hoax, being a Disney fan as one of the German’s dictator’s many odd habits was entirely plausible. Here are the evidences.

Hitler had a friend by the name of Putzi and according to his accounts, the Fuehrer was quite fond of whistling. According to Putzi, one of the tunes Hitler often whistled was Who’s Afraid of the Big Bad Wolf?, a song originally featured in the 1933 Disney classic The Three Little Pigs. Hitler might have felt it was a song fitting to him since his name, Adolf, was derived from the Old Germanic name Adawolf which, when translated, meant “noble wolf”. As a matter of fact, many of Hitler’s headquarters, bases and hideouts had “wolf” in their titles [The Wolf’s Lair, Werwolf , Wolfsschlucht I . . . you get the meaning].

But the Who’s Afraid of the Big Bad Wolf? tune wasn’t the only Disney song Hitler whistled. In Putzi’s accounts, Hitler whistled the tune of the song When You Wish Upon a Star, a song featured in the 1940 Dinsey movie Pinocchio. The dark side of this story, he chose to whistle this tune while looking out over the recently conquered Paris! [imagine Lana Del Rey’s take of Once Upon a Dream and you’ll get the meaning.]

Way back in 2008, a war museum in Norway exhibited a series of artworks featuring Disney characters which, the museum pointed out, were made by the Fuehrer himself. The paintings all bore the simple signature A.H. and included two characters from the 1937 Disney film Snow White – Bashful and Doc – which, incidentally, was one of the German dictator’s favorite movies. 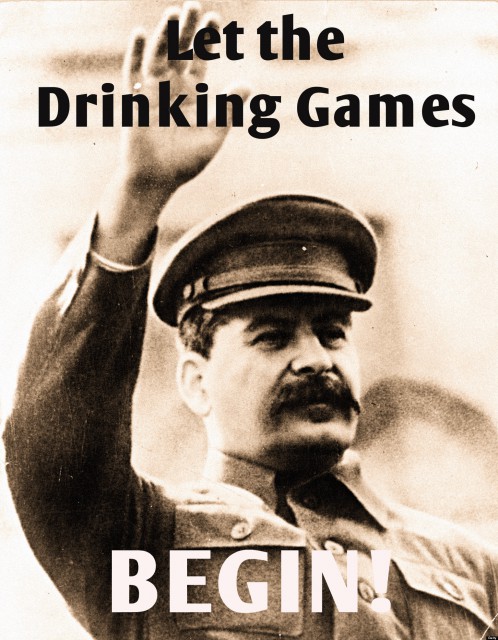 Dining with the Russian tyrant took as long as six hours and one of the odd habits the Soviet leader had was playing drinking games with the heads of state he was having dinner with [we’ll, if you were a head of state in Stalin’s time, saying no to his dinner invitation would have been equivalent to an execution].

In between eating the delicacies prepared by chef Spiridon [whose grandson is present Russian leader Vladimir Putin, mind you], the Russian tyrant pressured his dinner guests to playing drinking games with him the favorite being “Guess the Temperature”. These drinking games, reportedly, were very intense that it made Yugoslavian leader, Tito, puke on his sleeve one time and in many occasions, had Khrushchev wetting his bed.

– Stalin loved writing vulgar notes on the margins of drawings of nude men. 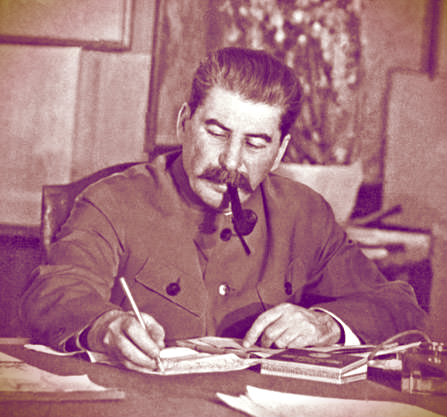 Whenever the Russian tyrant saw a reproduction of nude male drawings made by Russian artists, trust him to leave a crude message written on its margins using blue or red pen — a nasty odd habit. Like an errant student, he would vandalize on the nude figures themselves though this was just an occasional pastime as scrawling a vulgar note was more his style.

One time, seeing a sketch of a man reaching for his genitals, Stalin wrote: “You need to work, not wank. Time for reeducation”. Another occurrence, upon seeing a sketch of a man standing in front of a reclining woman, he noted: “Idiot!!! You’ve completely forgotten what to do”. Still, another example was when upon seeing a drawing of a bearded naked man, he draw an inverted triangle on the man’s genitals and wrote the words: “Why are you so thin? Study Marxism!” [Experts agree on this last vandalism and crude note that it was an evidence that the Russian tyrant was either a latent homosexual or a homophobe].

All the notes bore the signature J Stalin and were believed to have been kept in secret by the Russian leader’s bodyguards until they were bought by a private collector after the fall of the Soviet Union.

– Britain’s well-loved PM had a long list of odd habits he was labeled an eccentric.

Churchill is well-known for his sharp tongue as well as for his penchant for cigars and alcoholic beverages but one of his most odd obsessions was his fondness for silk [only very fine woven and said to be in pale pink hues] underwear. 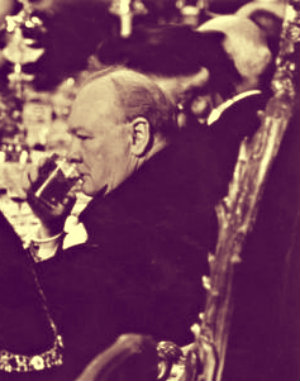 Among the alcoholic drinks he downed everyday, the WWII British PM was mostly a fan of champagne. About it he said: “I could not live without Champagne. In victory I deserve it. In defeat I need it”.

To most of us, going naked most of the time throughout the day would be odd but for the WWII British leader, it was his norm.

When Churchill visited and stayed in the White House before Christmas of 1941, the secretive visit – which lasted for 24 days – left a great impact on the White House staff. As Chief Usher J.B. West recounted, the staff who served the PM his brandy would either see him in his beloved jumpsuit [described by the Chief Usher as “an extraordinary one-piece uniform” Churchill wore everyday] or in his birthday suit. 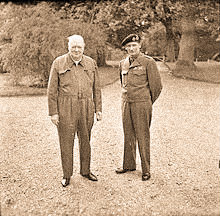 “[The staff] never quite got over seeing him naked in his room,” West said.

To this, West concluded: “It was the jumpsuit or nothing. In his room, Mr. Churchill wore no clothes at all most of the time during the day”.

Another odd characteristic for such a strong man as Sir Winston Churchill was his being very emotional. According to accounts, the WWII British PM would break down and cry every time he was given bad news during meetings and in a number of his broadcast speeches, he could be heard holding back his tears.

– FDR was a philatelist.

FDR took pride in his massive stamp collection which numbered 25,000 and were placed in 40 stamp albums. And being an enthusiastic philatelist, Roosevelt lent a hand in the creation, design and promotion of over 200 stamps during his time [four terms in all making him the president with the longest serving term in American history] in the US presidency.

And in lending a hand, FDR worked closely with then Postmaster General James A. Farley and actually sketched his own stamp ideas and creations. This may be odd and may be taking being a philatelist [stamp collector] a bit too much but as FDR said about his hobby, it was his saving grace when he was stricken with polio [though experts believe he had Guillain-Barre Syndrome] and offered him solace.

FDR was not afraid of going to war or making important and life-changing war decisions but there was one odd fear he had — he was afraid of the number 13 [the phobia known as triskaidekaphobia]. 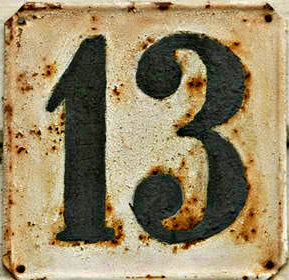 For one, he would insist that his secretary dine with him if the dining table seated thirteen people without her. He wouldn’t also, in any circumstances however dire they were, travel on the thirteenth day of the month.

– Mussolini thrived on a diet of milk and crackers for more than a year.

The Italian dictator, one-third of the Axis Power, suffered from serious duodenal ulcer that at one time kept him bedridden for fifty days. This illness was the reason behind his living on the sustenance of milk and crackers for more than a year.

However, newspapers were forbidden to print anything about his odd diet since Mussolini believed it would ruin his macho image.

According to authors Victoria Clark and Melissa Scott in their book Dictator’s Dinner: A Bad Taste Guide to Entertaining Tyrants, there was one time when Mussolini wrote an odd ode to bread. In this oddly funny poem, the Italian dictator called bread the “jewel of the hearth”, “God’s sweetest gift” and “holiest reward of human fatigue”.