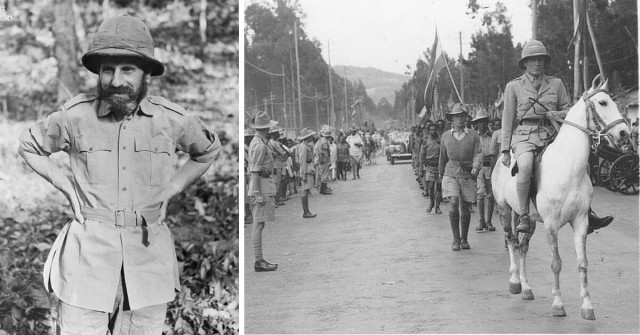 Orde Wingate was a British officer who served in colonial territories and World War II, reaching the rank of Major General before his death on March 24th, 1944 when his plane crashed into the jungle in northwest India.

Wingate is remembered and even praised by many. Memorials to him can be found in England, Israel and Ethiopia. Though he is also remembered as unorthodox (sometimes dangerously so), erratic, difficult to work with, and exceptionally eccentric.

Probably his most famed exploit is the creation of the Chindits battalions for deep-penetration missions into the Burmese jungles behind Japanese lines. The success of these missions is very much debatable, but nevertheless, Wingate’s various adventures and military achievements have secured him his place as a legend, if a very strange one.

Wingate was born in India, the son of a British army officer, on February 26th, 1903. He had six siblings, with whom he spent most of his early years. In 1916, the family moved to England where Wingate received his formal education.

In 1921, he was accepted to the Royal Military Academy at Woolwich where he studied to be an artillery officer. He was rebellious, often insufferable. When his skill at horseback riding landing him a place at the Military School of Equitation, where he of course flourished, the cavalry officers, especially, could hardly tolerate him.

In 1927, Wingate obtained a six-month leave and headed off, by bicycle, to Sudan, a British territory, catching a boat from Yugoslavia to Cairo, Egypt. He reached the capital, Khartoum and was also granted a transfer to the Sudan Defense Force. Serving in the East Arab Corps, he commanded companies patrolling the border with Ethiopia, catching slave traders and ivory poachers. He loved being out in the wilderness. He was, however, still very much disliked by other officers who found his personality abrasive.

Wingate’s next major assignment was in the British Mandate of Palestine. Soon after his arrival in 1936, he became deeply involved with the Jewish communities, their leaders, and Zionist movements. Believing it to be a religious obligation, Wingate became a Zionist himself, heavily promoting the formation of a Jewish state.

To fight the Palestinian Arab guerrilla forces in the area, Wingate suggested to Major General Archibald Wavell (commander of British troops in the area) the idea of commando units of British and Jewish troops to counter raids, saboteur operations and find the villages where the guerrillas sought refuge. Wavell approved and Wingate formed the Special Night Squads from volunteers in the British Army and Haganah, the Jewish paramilitary force that was the precursor to the Israeli Defense Force.

For his actions in Palestine, Wingate was awarded the Distinguished Service Order and became a hero in the Jewish community and is still remembered in Israel to this day for his huge role in training Haganah forces.

In February 1941, Wingate started operations with his new command. Requested by Wavell, now commander-in-chief of Middle East Command, to fight the Italians in Ethiopia, Wingate travelled to Sudan and formed the Gideon Force (named after the biblical Judge who defeated a large army with a much smaller one) of British, Sudanese, Ethiopian soldiers and even volunteers from the Haganah SDS.

Wingate’s Gideon Force, numbering about 1,700, moved behind Italian lines and worked with local militias to attack Italian forts and supply lines. Near the end of the campaign, Gideon Force accepted the surrender of 20,000 Italian troops. Wingate and his men accompanied Emperor Haile Selassie on his return to the capital Addis Ababa in May 1941. He was also awarded his second Distinguished Service Order.

In both Palestine and Ethiopia/Sudan, Wingate’s close ties to the local communities and peoples,frustrated and alarmed other officers. This, combined with his official reports in which he often railed against other officers and the higher command, hurt his chances at promotion and led him to being moved frequently.

There was also the matter of his eccentricities, which included wearing a wreath of raw onion and garlic around his neck which he would frequently chomp into (he claimed it promoted good health and warded off mosquitos) and greetings guests in his command tent while completely naked.

Wavell had an affinity for Wingate and his ingenuity, however, and when he was posted to commander-in-chief of the South-East Asian Theatre, helped Wingate secure a command. Wingate had also managed to get a report through his and Wavell’s political connections to Winston Churchill who met with Wingate and liked his ideas for deep-penetration missions.

Thus, in March of 1942, Wingate arrived in India and was promoted to colonel by Wavell, not long before the Japanese takeover of Burma. Wingate was given command of the Indian 77th Infantry Brigade and trained them for a long excursion into the jungle.

This training included camping in the jungle during monsoon season which led to hundreds of men falling ill. Wingate believed that a tough mental attitude would boost infection from disease. This was an example of his eccentricity leading to poor decision-making.

The unit, under Wingate, were called the Chindits (a bastardized version of the Burmese name for lion) and on February 12th, 1943, they headed out to slip behind Japanese lines and disrupt their operations. This was an initial success. They managed to sabotage a Japanese railway supply line, themselves being resupplied by airdrops. But they soon travelled too far into enemy territory and when they tried to turn back, the Japanese managed to trap them. Wingate ordered his men to split off into smaller groups and make their way back to British territory.

Over the next several months, what remained of Wingate’s Chindits trickled back into India. Though losses amounted to about one-third of the men, it did raise the moral of the other troops and was applauded by the higher command back in Britain. Wingate was granted permission to run another mission.

Named Operation Thursday, Wingate was given command of six whole brigades for this mission. Two were dropped into the Burmese jungle behind enemy lines using large gliders in March 1944. Those men cleared runways so other troops could land in transport planes. Though many officers argued that the mission took the most experienced and battle-hardened troops away from the front line of battle, as the Japanese tried to push into India, they were constantly distracted by the Chindits, having to divert much-needed troops and resources to deal with them.

The Japanese commander, Mutaguchi Renya claimed that he probably could have tipped the scales to a Japanese victory if he didn’t have to fight the Chindits.  Wingate’s force, definitely, contributed to the victory in Burma, even though their achievements may have been overstated.

When his plane crashed on March 24th, 1944, Major General Wingate was on his way to inspect his troops in the Burmese jungle. He died along two other British officers and several American officers, including the pilots. The remains of all ten who perished were exhumed and moved to Arlington National Cemetery in Virginia.

Wingate, is still remembered as a pioneer in unconventional warfare and as a most unusual man.

By No 9 Army Film & Photographic Unit – This is photograph IND 2290 from the collections of the Imperial War Museums (collection no. 4700-38), Public Domain, https://commons.wikimedia.org/w/index.php?curid=463992

All photos sourced from wikipedia.org