In a final attempt to reinforce the perimeter and secure a crossing site the 4th Dorsets cross the Rhine at night. Their main objective is to secure the Westerbouwing Heights so that future reinforcements can be brought in without being under constant German fire.  Unfortunately there are too few boats to make a crossing in force and because of the fast flowing Rhine the Dorsets land widely dispersed and are easily mopped up by the Germans. Only a very small number of Dorsets reach the perimeter, the rest are taken prisoner.

Colonel Graeme Warrack, the 1st Airborne Division’s senior medical officer, obtained permission to arrange a truce with the Germans.  This is approved by the German commander and as many of the wounded as possible are evacuated into German care, where, although becoming prisoners, they will at least be given appropriate medical attention. German vehicles enter the Perimeter during the truce and remove approximately two hundred and fifty stretcher-bound men, whilst a further two hundred walking wounded were marched to a hospital in Arnhem. 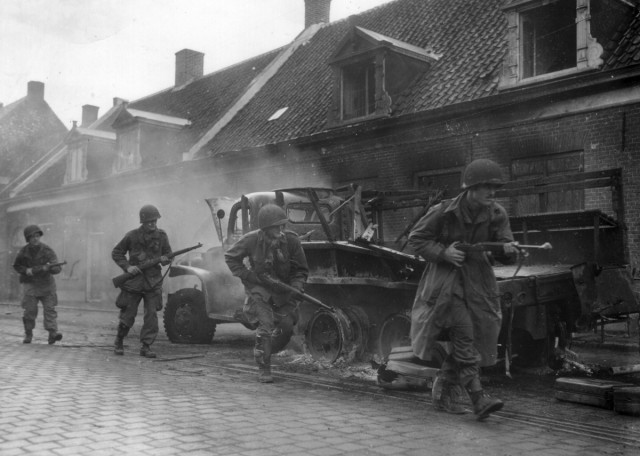 101st Airborne Soldiers make their way to the Koevering, a staged photo

In the evening the corridor is again blocked by the Germans from Kampfgruppe Junwirth, this time south of Veghel at Koevering. Their attempts to take Eerde and push through to the bridges at Veghel are thwarted by the 501st PIR who then drive the Germans out of the Sand Dunes in Eerde. (Read full article here). They then bypass the Eerde and slip through an undefended stretch of road between Sint Oedenrode and Eerde.

The 502nd at Sint Oedenrode spots them in time but cannot prevent the Germans from reaching the road. The first counter attacks are stopped and during the evening and night more and more German reinforcements arrive. It is estimated that over 700 Germans, 3 Jagdpanthers, one or two 88mm antitank guns and other armored vehicles manage to reach Koevering and setup a strong defense in the woods astride the corridor.

Tanks from the Coldstream Guards are once again forced to drive south from Nijmegen to Veghel to help the 101st Airborne division unblock the corridor.

This is seen as the death stroke of the operation and that day order is given to evacuate the forces north of the Rhine, which will take place on the evening of September 25th.

The 82nd Airborne starts reorganizing the front, all regiments move to new locations to the east of Nijmegen. Even the division HQ is moving, for a few days now it has received very accurate artillery fire and moves out of range.

The rest of the 508th tries, for the third day in a row, to make progress in the polderland east of Nijmegen but again fails break through the German defenders  The attack is called off after, that night they 508th is relieved by the 504th. The platoons from the 508th PIR at Devils Hill are finally relieved and at night move off the hill.

By chance a emergency airstrip is discovered at Keent and is quickly transformed into a fully functional airfield to fly in supplies and evacuate the wounded. The first 2 Dakota’s land here on the 23rd, many will follow over the next few days.