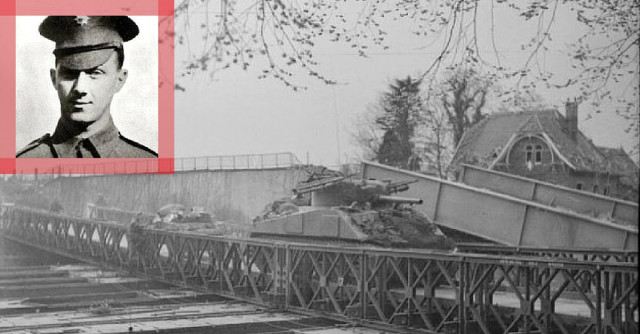 A nation can desire for a war to be over all they want, but the inevitable fact of war is that the enemy always gets a say in that conversation.  By late April 1945, Allied victory was inevitable and for the men fighting the war in those last few weeks they wanted nothing more than to make it to the finish line.  But since elements of the German army were determined to fight until the end, that meant there was still gallant and dangerous work to be done.

For Irish Guard Edward Charlton, that would mean dismounting the .30 Browning machine gun from his tank and leading a one-man counter-attack on assaulting German forces with one shattered arm. And while he would fall at the hands of the enemy, most of the information about his gallant actions would actually come from the Germans themselves after the war as they couldn’t help but respect the hurt this Irish Guard had put on them before he died.

A Long War for Charlton

Edward Charlton was born in 1920 in Rowlands Gill.  Shortly after the start of the war, he was conscripted into the Guards Depot in Caterham in 1940.  And while the war would get off to a slow start for Charlton, a transfer to the 2nd Armoured Battalion of the Irish Guards would take him right into the thick of the fighting up until the end of the war in Europe.

The Guards Armoured Division remained in the United Kingdom until late June 1944 when they landed in Normandy to help push the attack after D-Day.  From there, they participated in various engagements to include Operation Market Garden and the push over the Rhine into Germany.

By April of 1945, this took Charlton and the 2nd Battalion Irish Guards into the German village of Wistedt.  After seizing the village along with a platoon of infantry, Charlton’s group of tanks came under a heavy German counter-attack led by a battalion of the 15th Panzer Grenadiers supported by six self-propelled guns.

All of the tanks were hit and placed out of commission, including the tank in which Charlton served as the co-driver.  Without the support of the tanks, the infantry holding the village were under the threat of being overrun by a German enemy determined to fight until the end and reclaim the part of the homeland the Guards had just taken from them.

Despite having survived the entire war in the service since 1940, Edward Charlton would undertake one of the more inexplicable gallant actions just weeks from the war’s end that would make him the final Victoria Cross recipient of the European theatre.

With his tank out of commission, Charlton dismounted the .30 Browning machine gun from his tank and upon his own initiative led his own counter-attack on the German forces as he fired the Browning from the hip with devastating effect upon the enemy.

In complete disregard for the enemy fire, he ran down the road fully exposed and unleashed a hail of bullets halting the lead German company in their tracks.  Charlton’s actions gave the infantry time to regroup and reorganize as he suppressed the enemy for over 10 minutes.  It was at this point; he took a wound to his left arm dropping him to the ground.

Unable to fire the heavy Browning from the hip with just one arm, he mounted it up against a fence and continued to pour fire into the enemy.  For another ten minutes, he stood mounted against the fence and suppressed the German attack inflicting heavy casualties on them.  He then took another round to his left arm leaving it shattered and useless as it dangled from his body.

Despite now only having one arm to fire and reload the machine gun, he mounted it back up on the fence and continued to fire.  For over 20 minutes, Edward Charlton held off the German counter-attack giving his comrades time to manage a proper defense.

Eventually, a third round struck Charlton, and he dropped to the ground mortally wounded.  With Charlton out of commission, the Germans continued to press the attack. With his fellow guardsmen unable to see exactly what happened to him, it was presumed that he had been captured by the enemy, and this was the initial report given to his family.

However, after the war, it became apparent that while he was indeed taken into captivity by the Germans, he was already mortally wounded and died in captivity.

While it is obvious that the British forces had great reason to respect what he had done for them in the village of Wistedt, no officers or NCOs were able to directly observe his actions due to the nature of the battle.  However, the Germans on the receiving end of his fire got a first-hand look, and they were so impressed with this man’s actions against them they reported in full Charlton’s gallantry.

With the combined record complete, Charlton was recommended and awarded the Victoria Cross for unspeakable gallantry and personally saving his fellow soldiers from being overrun.

It would be a remarkable feat at any point in the war, but worthy of the highest esteem when one considers it occurred just weeks before the war ended.

The Allies knew victory was at hand, and perhaps if Charlton had retreated after the first wound, he would have marched in the parades with his fellow victors.  Or perhaps, had he not fought with such gallant aggression, a great number of his fellow guardsmen would have fallen in his stead.  For Charlton, there was no choice as he simply saw what the moment required and didn’t hesitate to prove the Irish Guards were in this from beginning to end.

His Victoria Cross would be last of the European theater in World War 2 and a fitting bookend on six years of gallantry, heroism, and honor.