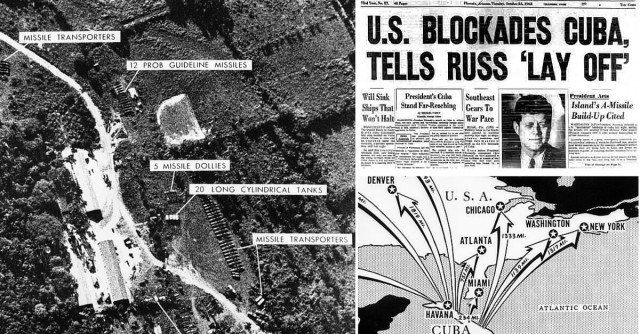 In October 1962, the US and the USSR nearly came to blows over Cuba, potentially starting WWIII and plunging the world into a nuclear winter. Known as the “Cuban Missile Crisis” to the Americans and the “October Crisis” to the Cubans, the Russians know it as the “Caribbean Crisis.”

Because Cuba is geographically close to America, the US government wanted to keep a close grip over the island. The solution was Fulgencio Batista y Zaldivar, the US-backed dictator whose exploitative economic policies, censorship, and suppression of dissidents kept Cuba in line. At least till Fidel Castro ousted him on 1 January 1959.

Castro assured the US that he was not a communist, but they didn’t believe him, so they tried to have him killed. When that failed, they tried to attack the island several times, forcing Castro to appeal to the USSR for help – thus setting the Crisis in motion.

On 4 April 1949, the US set up NATO – an alliance of European countries that, together with Turkey, surrounded the USSR. In the event of a war, the US could strike Soviet territory using NATO countries as a buffer zone. Since America was closely allied with Canada to the north and the Latin American countries to the south, however, the Soviets couldn’t return the favor.

Until Castro asked them for help, that is. With Cuba a mere 112 miles south of the continental US, the USSR could at last set up nuclear missiles at America’s doorstep – balancing what it saw as an unfair situation.

President Kennedy understood this, so he terminated diplomatic ties with Cuba on 2 January 1961. Castro retaliated by officially declaring Cuba to be a communist state. The US responded with yet another failed invasion attempt on April 16 – known as the Bay of Pigs Invasion.

Later in June, East Germany built the Berlin Wall while America did nothing. This convinced Soviet Premier Kruschev that Kennedy had no stomach for war.

It’s still not known when the USSR began shipping nuclear missiles to Cuba, but on 14 October 1962, an American U-2 spy plane confirmed the presence of Soviet surface-to-air missiles on the island, as well as SS-4 nuclear missiles that could reach New York, Philadelphia, and Washington DC. Though the nukes were unarmed, they wouldn’t stay that way much longer.

Kennedy had already received flack for the botched Bay of Pigs Invasion, as well as for not doing anything about the Berlin Wall; but with the congressional elections nearing, his party was in trouble. Democrats had long been considered weak in matters of war, and in the 1960s, America was very pro-war. If he failed to act, he risked being impeached for incompetence.

With Congress unwilling to legalize a war on Cuba, Kennedy officially quarantined the island on October 21. He also convinced the Latin American states to support him and turn on Cuba.

On October 22, the US military went on DEFCON (defense readiness condition) 3 – the official state of combat readiness. US Navy Antisubmarine Warfare (ASW) ships made their way to Cuba to counteract Soviet submarines. At 7PM, Kennedy announced the quarantine to the public, saying it was necessary to keep the Soviets from arming nuclear missiles in Cuba.

The next day, six US Crusader jets flew over the island, confirming that the missile sites were undergoing launch tests. American ships surrounded the island, keeping at bay a ring of Soviet ships and submarines. Merchant vessels carrying food, medicine, and non-military supplies were allowed to land in Cuba after a thorough search by US Navy personnel.

At dawn on October 24, some Soviet ships tried to break the blockade by moving closer to the island, forcing the US to go on DEFCON 2. The US Navy were told they could fire on the incoming vessels, but only after first trying to talk to them. At 10:25AM, the Soviets started backing off. 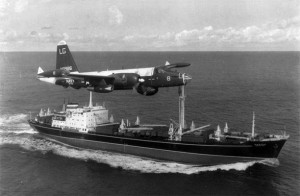 It didn’t matter by then since some of the nuclear missiles had become operational. The Americans reacted by increasing surveillance flights over Cuba from twice a day to once every two hours. It was a mistake.

October 27 was when hell nearly broke loose. Two US reconnaissance planes had veered off their flight plan – one into Russian air space, and the other into Cuban space. The former was intercepted by Soviet MiG fighters, which forced the Americans to send F-102 fighters armed with nuclear air-to-surface missiles into the fray. There was no fighting, however, as the reconnaissance plane was escorted safely back into US air space.

The one that veered into Cuban airspace was not so lucky. The Cubans shot it down with an S-75 Divina SAM missile, killing the pilot. The Navy sent more RF-8A aircraft for reconnaissance flights, but they were also shot at by Cuban forces. One was hit, but managed to return to its base intact. Despite not recognizing Cuba, the US still maintains a military base at Guantanamo, for which it pays minimal rent.

Four F8U-1P Crusader jets were sent over the missile sites at San Cristóbal and Sagua la Grande. The Cubans fired at them and hit one, but it also got away. This convinced the Cubans that an all-out American assault would follow. The Soviets thought so, too, since the White House announced that Kennedy would make a speech the next day at 5PM.

The Soviet military were convinced that Russia was not ready for a war with the Americans, especially since the USSR was surrounded by NATO. On October 28, Kruschev sent Kennedy a letter, agreeing to pull Soviet forces and missiles out of Cuba in return for America’s guarantee that it would no longer invade the island.

Kennedy agreed and that same day, reconnaissance flights over Cuba stopped. Shortly after, a UN team arrived to oversee the dismantling of the nuclear missiles and their shipment back to Russia.

That was when everyone realized two things: that the world had been halved between the US and the USSR, and that nuclear annihilation hung over all.