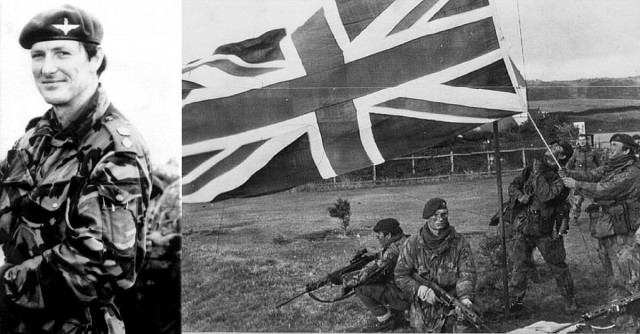 Perhaps it is because the war only lasted ten weeks and occurred during a time period where the US-Soviet Cold War was the backdrop for most international relations, but the Falklands War is often neglected as a significant military engagement in history.

However, for the men that fought it and for the nations involved, they might have a word or two to say about that.  Lieutenant Colonel Herbert Jones, also known as H. Jones, stepped into the halls of military history during this war when he was awarded the Victoria Cross.  One of only two men to receive such an honor during this conflict, it is worth noting that an officer of a high rank whom would typically find himself further back from the forward positions found himself leading the charge on an Argentine trench.

This action would cost the 42-year-old warrior his life, but his legacy would live on and bring attention to war often neglected in history.

A Long Path to War

Born in Putney at the dawn of World War 2, world events would see to it that it would be a long wait for Herbert Jones to see combat.  He graduated from the Royal Military Academy in 1960 and was commissioned a 2nd Lieutenant into the Devonshire and Dorset Regiment. Subsequent promotions would see him rise to the rank of Major in 1972 and serving with the 3rd Infantry Brigade in Northern Ireland.  Here, he would serve in the ongoing conflict with the Provisional Irish Republican Army and their efforts to secure Northern Ireland from the British.

In 1977, he received recognition for his efforts here and was appointed a Member of the Order of the British Empire.  In 1979, he reached the rank of Lieutenant Colonel and was sent to a parachute regiment for the British Army.  It was here in command of the 2nd Battalion of the Parachute Regiment that he would distinguish himself.

In 1982, the Military dictatorship ruling Argentina at the time faced a stagnant economy and increasing civil unrest. In order to bolster their dwindling popularity, the dictatorship would embark on a doomed strategy in hopes of playing upon Argentine nationalism and pride.

Off the coast of Argentina and scattering out into the South Atlantic, the Falkland Islands along with the South Georgia and the South Sandwich Islands rested under British control since the colonial days of the British Empire.  Argentina has long laid claim to these islands citing history that pre-dates British control.

While these islands had long been a source of friction between Argentina and Britain, the military dictatorship decided to take it up a notch when the military invaded the Falkland Islands on April, 2nd 1982 and the subsequent islands the following day.  The British were initially caught off guard with this invasion and were not prepared to offer an immediate defense of the action.

Argentina took control of the islands and awaited a British response.  The United Nations condemned the invasion with China and the Soviet Union abstaining and the United States offered material and logistical support to the British while not becoming directly involved.

While the British military was considered vastly superior, retaking the islands was considered no easy feat.  For Britain to assemble a task force large enough and bring it to the South Atlantic with enough air cover was a considerable challenge.  The Argentine military had the advantage of fighting a defensive war on the islands while offering substantial air cover that threatened the British Fleet.

By late April, the British were approaching the islands and the conflict began in earnest.  Among those charged with retaking the islands was the 2nd Battalion of the Parachute Regiment commanded by one H. Jones.

For Jones, it would be the Battle of Goose Green which took place on the 28th and 29th of May that would earn him a place in military history.  As the Falklands War had dragged on, there was intense political pressure for a substantial victory.  On the 28th, Jones’ battalion was ordered to take on entrenched Argentine positions south of Darwin.

From these well prepared and entrenched positions, the Argentine military held up the 2nd Battalion with intense machine gun fire.  After receiving a number of casualties, Lieutenant Colonel Jones headed to the front to better evaluate the battle.

At the front of his battalion, Jones realized the assault was on the verge of faltering under the heavy machine-gun and artillery fire.  Rather than allow his battalion to remain targets for the entrenched enemy positions, he picked up a sub-machine gun and with complete disregard for his own life charged the enemy trenches. He was knocked down by enemy fire, but picked himself back up and continued the assault.

Just short of the enemy position, he was struck again and killed.  Within a short time, the battalion was pushing the assault up the ridge after being inspired by their leader’s actions and took the enemy position.  Most of the Argentine defenders surrendered in the face of the continued assault.

For his actions that day, Lieutenant Colonel Herbert Jones would become one of only two men to receive the Victoria Cross during this conflict.  And while few would doubt the gallantry it required to lead the charge as a senior officer in the face of heavy machine-gun fire, there were questions about the wisdom of his actions.

Some claimed his action caused him to lose sight of the overall battlefield and pointed to the subsequent surrender of the Argentine forces that a different path could have been taken against the demoralized conscripted forces of Argentina. Meanwhile, others would point to his actions as a reason for the defending forces to lose heart.

The Battle of Goose Green offered Margaret Thatcher the substantial victory for which she sought, and she would go on to say of Jones that “his life was lost, but his death was a turning point in the battle.”  Argentina capitulated during the War, and it was a tactical and strategic victory for Great Britain.

Regardless of what one might think about this war or Jones’ actions, the history of war will always recognize the gallantry of those who lead from the front in the face of intense enemy fire.

After the Falklands War, it would be over 20 years before another would be awarded Britain’s highest military honor and continue the legacy set by H. Jones and all those who came before him.