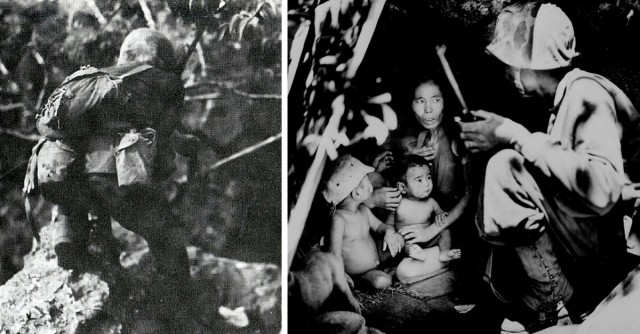 The story of Guy Gabaldon might sound like a fictional story, but he did capture more than 1500 Japanese on his own. At the beginning of his mission, he even had to confront the authorities to do so. But let’s start from the beginning of the story.

Guy, also known as Gabby or Pied Piper from Saipan, was born to a Mexican-American family on March 22, 1926 in LA and had 6 brothers. When he was 12 he moved in with a Japanese-American family, the Nakano, and there he learned some Japanese, but not only the language, but also their traditions and culture. When WWII began they were sent to a relocation camp and Guy, shortly after, at the age of 17, decided to join the Army.

When he was only 18 he was sent to Saipan. Saipan is part of the Mariana Islands, and is located about 1250 miles away from Tokyo. Since it was an important Japanese strategic stronghold, it was crucial to free it from Japanese invasion. This operation was called Operation Forger and started on June 15th, 1944, when the 2nd and 4th marine division landed on Saipan. They were later joined by the Army’s 27th Infantry. This battle was a bloody one, the results were 3000 American, 30,000 Japanese and about 900 local civilians dead, till the Island was secured by July 9th.

The first time he went out on this self-imposed mission of capturing the enemy, he managed to get two Japanese prisoners. He was then threatened with a court-martial for leaving his duties. Still, he ignored it and the next day went out again, this time he managed to capture over 50 Japanese. He was then given free rein and permission to work as a “Lone Wolf” and worked at night, mostly.

Once, they saw him surrounded by more than 800 Japanese, some of them still armed, but they were his prisoners, he had captured all of them in just one day. To get them to give in,, he would approach the caves and their hiding places and bid them to surrender. He would falsely tell them they were surrounded and that  if they came out peacefully they would not harm them. He also promised them dignity and to get them back to Japan when the war was over.

He didn’t enjoy all the killing, and he thought that his deeds could save thousands of lives, and he did save 1500 lives. Capturing the enemies kept them alive. But  this wasn’t the only advantage, by capturing them he could also get more information.

All in all, by July 9, he had captured more than 1500 Japanese and local civilians, being his main weapon the knowledge of Japanese, cigarettes and candy.

After serving for two years in the Army, he was wounded by a machine gun and so ended his service.

He got his Silver Star upgraded to a Navy Cross for his heroic deeds, and though he was nominated to get a Medal of Honor, he didn’t get it. He claims that the reason for that is his Mexican procedence.

After war, he did many things and lived in many places, including Saipan itself, for about 20 years. He was invited to a TV show called “This is your life”, and movie was made about him in 1960 called “Hell of Eternity”. He claims, nonetheless, that Jeffrey Hunter is nothing like him. He also wrote a book in 1990 called “Saipan: Suicide Island”.