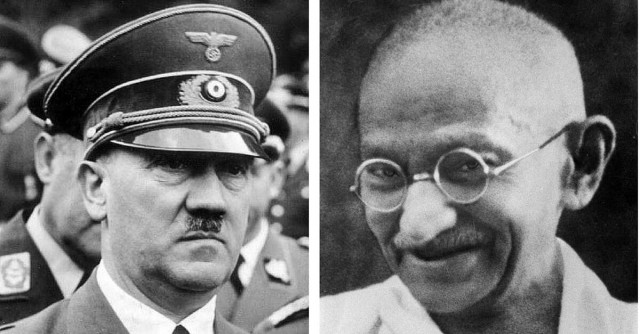 Mahatma Gandhi believed he could achieve his objectives through non-violent means. Adolf Hitler believed in the exercise of military might and the power of rhetoric. The two men could not have been more opposite in terms of philosophy, yet in 1939 as the storm clouds gathered in Europe Gandhi felt it necessary to do something.

On the 23rd of July in 1939, Gandhi wrote to Hitler, saying that he (Hitler) was “the one person in the world who can prevent a war which may reduce humanity to a savage state”. He went on to ask if Hitler would listen to the appeal from one who had “deliberately shunned the method of war not without considerable success”.

How Hitler would have reacted to this letter is probably not hard to imagine, but he didn’t get the chance. The British government intervened and prevented its delivery. Germany invaded Poland two months later.
The following year saw Germany invade Denmark, Norway, Holland, Belgium and France. British troops had been evacuated at Dunkirk, and on Christmas Eve, December 24, 1940, Gandhi tried again. He wrote to Hitler at some length, with a sentence saying that his letter was also intended to be read by “Signor Mussolini”, who he hoped would consider the letter as being addressed to him also “with the necessary changes”.

Gandhi’s letter pulls no punches – it refers to his struggle against British imperialism, saying that “One-fifth of the human race has been brought under the British heel by means that will not bear scrutiny.” Returning repeatedly to his central theme of non-violence, Gandhi makes the point that India was slowly moving towards its goal, which was independence through non-violent civil disobedience. Having referred to British rule in India as being “the most organized violence in the world”, he tells Hitler how, in the current situation, “It remains to be seen which is the better organized, the German or the British”, the Business Insider UK reports.

The letter ends with a plea for peace at Christmas. “Is it too much to ask you to make an effort for peace during a time which may mean nothing to you personally but which must mean much to the millions of Europeans whose dumb cry for peace I hear, for my ears are attended to hearing the dumb millions?”
This letter was also not delivered. Four months later Hitler had invaded Yugoslavia and Greece and was planning the German invasion of Russia.