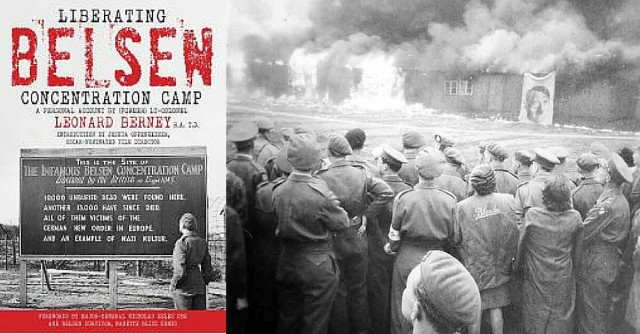 A World War Two veteran who took part in the liberation of the Bergen-Belsen concentration camp has published his own memoirs to ensure the story and experience never dies.

Lieutenant Colonel Leonard Berney is working with the well-known British broadcaster and news reader Natasha Kaplinsky to create the memoirs.

Those who have read the memoirs have said that they cried at the revelations told in the book. Many have said that while they know about the Holocaust it wasn’t until they read Leonard’s memoir that they knew the true horror of the camp.

The memoir is called, ‘Liberating Belsen Concentration Camp’. After the initial D-Day Landings, Leonard was part of the Allied ground forces that pushed through France and on into Germany. It was then that the troops began to realize the true horror of the Nazi regime as they started to come across the death and destruction within the Nazi concentration camps.

It was Bergen-Belsen that was liberated by British troops.

Leonard was one of the first troops to step into the camp and so has a unique view on what happened there. His first impressions at Bergen-Belsen saying that the camp’s main road was littered with dead bodies and hundreds of starving men and women were trapped behind barbed wire, the Daily Echo reports.

He says that there were a series of long huts surrounded by dead bodies and then in between there were piles of bodies.

When they reached the other end of the camp he says that there was a huge open mass with hundreds of corpses. He says that in truth it was indescribable – what he saw, the smell and horror of the situation.

His memoirs are to form part of the British Government’s £50 million National Memorial and learning center about World War Two and the horrors of the Holocaust.

The Holocaust Commission was established by the British Prime Minister with the aim of ensuring that the Holocaust is never forgotten and that future generations can learn about the devastation it caused for Europe and the Jewish people.

Natasha Kaplinsky is a member of the Holocaust Commission and his helping Leonard with his book.