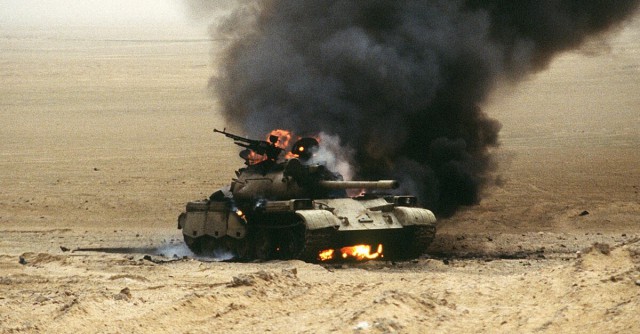 The First Gulf War is best remembered for its air strikes. Before the ground-invasion of Iraq, the American-led coalition devastated the enemy with high-tech bombing raids that aimed to take out key military targets including communications and infrastructure.

But once they entered Iraq and Kuwait, a different sort of war took hold. So it was that the desert of southern Iraq became the site of the last great tank battle of the 20th century – the Battle of 73 Easting.

Following an extensive bombing campaign and a feint into southern Iraq in early February 1991, Coalition forces launched a full invasion on 24 February. One of the main fronts of this attack was led by the United States VII Corps. Their aim was to get behind Iraqi forces, prevent a retreat from Kuwait and destroy five divisions of the elite Iraqi Republican Guard.

As with most operations in the Gulf War, the aim of the Coalition was to deliver a knock-out blow that would remove key Iraqi resources with a minimum cost to the Coalition.

The leading edge of VII Corps, and the main Coalition combatants in the battle, were the US 2nd Armoured Cavalry Regiment (2ACR), led by Colonel Don Holder.

2ACR was a reconnaissance and security division whose primary task during the advance was to identify Iraqi positions and strip away security forces so that other troops could move up for a full attack.

It consisted of 4,500 men divided into five squadrons – three ground squadrons made up mostly of M1A1 Abrams tanks and Bradley fighting vehicles; an aviation squadron of attack helicopters; and a support squadron. The Bradleys scouted ahead with thermal equipment to identify enemy positions, while the Abrams’ followed, ready to leap to the attack.

Their principal opponents were the Tawakalna Division of the Republican Guard. Tasked with defending the supply route along the IPSA Pipeline Road, the Tawakalna had committed a mechanised brigade and an armoured brigade to the area.

The Republican Guard was the elite of Saddam Hussein’s army. Better trained, disciplined and equipped than other Iraqi soldiers, they were also the most loyal to the regime. They had better pay than most and were mostly Sunni rather than Shi’a Muslims, tying them more closely to Saddam.

Before the invasion much was made in the western media of how difficult they would be to fight. In the face of American forces, they did not live up to the hype, to the point where comedian Bill Hicks would refer to their supposed skill and dedication as making them the “Republicans made this **** up Guard.”

Large swathes of the Arabian Peninsula consist of featureless desert, and it was across this terrain that 2ACR advanced. Without significant features to navigate by or measure the progress of the offensive, coordinate lines were instead referred to and identified via GPS.

On the afternoon of 26 February, much of VII Corps was between the 50 Easting and the 60 Easting lines. 2ACR was ordered to advance as far as the 70 Easting. There they were to engage with the Republican Guard without becoming decisively engaged themselves so that they retained manoeuvrability while preventing the opposition from moving.

Along the way, they met and eliminated several isolated outposts, including a dug-in tank, dismounted troops and an occupied village. But it was around the 73 Easting that heavy fighting finally took place.

The Battle of 73 Easting 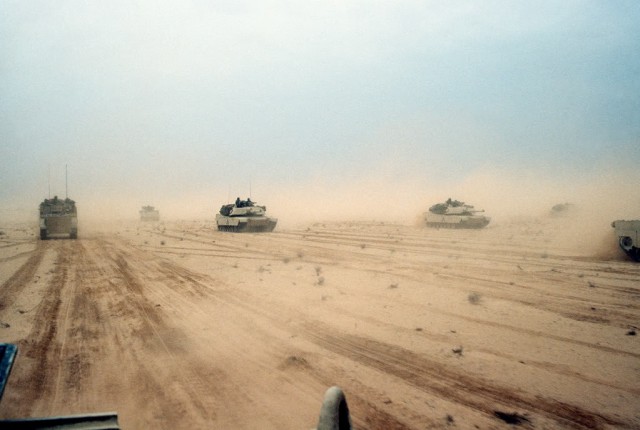 73 Easting was not a single isolated conflict in the style of pre-20th century pitched battles. It was part of a wider line of fighting spread across the Iraqi desert. As with many of the engagements in World War I, it was the intensity and significance of the fighting that made 73 Easting worthy of identification as a battle in its own right.

Continuing past the original limit of his advance, he fought through an infantry position and onto the high ground at the 74 Easting. There, a unit of 18 T-72s stood their ground against the American forces and tried to outmanoeuvre them. But surprise, better equipment and better training together gave the Americans a significant advantage. McMaster and his troops destroyed yet another Iraqi tank unit.

A scout platoon set out north from E Troop to regain contact with other coalition forces. Along the way, they ran into another Iraqi position, this one occupied by 13 T-72s, which they destroyed with TOW anti-tank missiles.

More of 2ACR now arrived and the unit took up positions overlooking a wadi – a dried up river valley – at and near the 73 Easting. By 6:30 pm, wave after wave of Iraqi tanks and infantry were advancing up the wadi and attacking the Americans, with the aim of driving them back and creating a safe line of retreat. For the next four hours, the Iraqis tried to drive out the Coalition forces but were held off.

By the time the fighting slackened around 10 pm, dozens of Iraqi tanks had been destroyed.

Sporadic fire continued throughout the night, and another fierce engagement was fought the next day around a nearby objective. But the fighting at the 73 Easting was over.

The Importance of 73 Easting

The size and significance of land battles in the First Gulf War were not widely appreciated until a decade later. 73 Easting was a huge tank battle, in which the Coalition forces destroyed 160 tanks, 180 personnel carriers and 12 artillery pieces. Two brigades of the Republican Guard were destroyed, and it was the Guard’s first ground defeat.

Strategically, the action kept the Iraqis busy while other advances took place. Perhaps as significantly, it was a demoralising defeat for Saddam’s supposed elite.