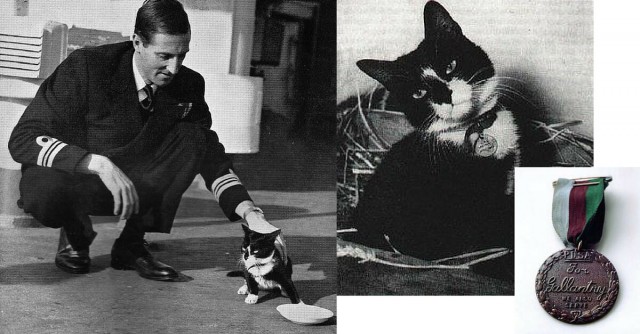 Able Seacat Simon was an orphan who grew up on the dockyards of Hong Kong before finding work aboard a British ship. There, he protected the crew and raised morale till his ship was attacked.

The injured were evacuated, but Simon stayed onboard even though he was badly hurt. Upon recovering, he returned to his duties for which he received awards and the gratitude of Britain.

It’s believed that Simon was born on Stonecutter’s Island (now part of Kowloon), sometime in 1947. That’s where Ordinary Seaman George Hickinbottom noticed him in March of the following year.

Hickinbottom was a 17-year-old who had joined the Navy the previous year and felt sorry for the homeless orphan. Unfortunately, the sailor’s rank didn’t entitle him to private quarters, but to bunk right beside the captain’s cabin.

Stationed aboard the British frigate HMS Amethyst, it was Hickinbottom’s job to make sure the ship was kept clean and that everything was in order. The sailor smuggled Simon aboard by hiding the poor waif in his shirt – for Simon was a cat.

Fortunately, Lieutenant Commander Ian Griffiths liked cats. He also understood the value of keeping the ship’s rat population under control, but the Ordinary Seaman was not off the hook. Griffiths threatened to have the sailor up on charges if he saw any cat poo onboard.

Thankfully, Simon was very likeable. The ship’s crew saw to it that whenever the new recruit made a mess, it didn’t stay visible for long, greatly easing Hickinbottom’s job and stress levels.

Besides catching rats on a daily basis, Simon developed a deep bond with Griffith. All the captain had to do was whistle, and Simon would come running. Then the two would make their rounds of the ship, making sure everything was in order.

The cat even gave his captain daily gifts – dumping dead and bloody rats at the man’s feet and even on his bed. And whenever the captain wasn’t wearing his cap, Simon would sleep in it.

But he never forgot his debt to George and the other men, spending time with the lower rank whenever possible. He even entertained them by fishing ice cubes from jugs of water with his paws on command.

In December, however, Griffith was given a new posting and felt it best to leave Simon behind. As luck would have it the new captain, Lieutenant Commander Bernard Skinner also liked cats, even though Simon never responded to his whistles nor followed his new master around the ship.

Everything was idyllic till April 1949 when the Amethyst was ordered to Nanking to relieve the HMS Consort. The Chinese Civil War between the Kuomintang and the Communists had broken out, so the Consort had to protect the British Embassy and be ready to evacuate personnel if needed.

At 8:31 AM on April 20, they were on the Yangtze River when they came under fire. Not sure who was doing the firing, they hoisted the White Ensign and the Union Jack. Fortunately, the shooting stopped, and they sailed on.

Unfortunately, their luck didn’t last. An hour later, as the Amethyst neared Jiangyin further upriver, it was fired upon by the People’s Liberation Army (PLA – the communists). The first missile flew over the ship, but the next hit the bridge, the wheelhouse, and the low power room. The captain and the coxswain steering the wheel were badly hurt, so the ship turned and grounded on a sandbank.

The British tried to fire back, but nothing happened because the low power room was damaged, rendering the gun-firing circuits useless. Though also hurt, First Lieutenant Geoffrey L. Weston assumed command and got a message out before another shell took out the generator.

Sometime after 10 AM, Weston ordered his men to board the lifeboats and make it to shore, but the PLA had no mercy for them, either. Only 64 made it to the south bank. The shooting stopped at 11 PM, leaving 22 dead (including Skinner) and 31 wounded.

Having become lighter, the Amethyst refloated at midnight of April 21. Several rescue attempts failed and negotiations bogged down because the PLA wanted the British to admit that the Amethyst had fired first. Throughout the negotiations, the PLA forbade the Amethyst from being resupplied, though it relented occasionally, preventing the remaining crew from starving to death.

Simon had been badly hurt during the first shelling but managed to crawl his way up to the deck. It took a while to notice him because priority went to the men. By the time they did, the noticed his whiskers and eyebrows had been burned off, there was dried blood on his back and legs from four shrapnel wounds, but he had no broken bones.

With so many men off the ship, the medical officer was able to treat him but didn’t expect him to survive. He recovered, however, and was allowed to cuddle up to the other injured sailors. In doing so, he helped boost morale during the long siege.

Having recovered from the worst of his wounds, he went back on active duty – and not a moment too soon. In his absence, the rat population was again out of control, threatening their dwindling supplies.

The Amethyst finally escaped on July 30, but lieutenant commander John Kerans, the new captain, was no cat lover. Simon tried to win him over by sleeping in the captain’s hat, but Kerans threw him out of his cabin. So Simon gave him a dead rat, but that didn’t go over too well, either.

Then Captain Kerans came down with a virus, and Simon decided to bunk with the new commander till the man felt better. Entente had at last been reached.

Kerans also made Simon a “cat officer” and gave him the rank of “Able Seacat” after he had successfully killed a giant rat called Mao Tsetung which kept escaping traps.

At every port Amethyst stopped at on its route home, Simon was presented with honour, and a special welcome was made for him at Plymouth in November when the ship returned. Simon was, however, like all animals entering the UK, subject to quarantine regulations, and was immediately sent to an animal centre in Surrey.

Whilst in quarantine, Simon contracted a virus and, despite the attentions of medical staff and thousands of well-wishers, died on 28 November 1949 from a complication of the viral infection caused by his war wounds. Hundreds, including the entire crew of HMS Amethyst attended his funeral at the PDSA Ilford Animal Cemetery in East London. His gravestone reads

IN
MEMORY OF
“SIMON”
SERVED IN
H.M.S. AMETHYST
MAY 1948 — NOVEMBER 1949
AWARDED DICKIN MEDAL
AUGUST 1949
DIED 28TH NOVEMBER 1949.
THROUGHOUT THE YANGTZE INCIDENT
HIS BEHAVIOUR WAS OF THE HIGHEST ORDER

Simon is also commemorated with a bush planted in his honour in the Yangtze Incident Grove at the National Memorial Arboretum in Staffordshire.

For his service, he was given the Dickin Medal (the animal version of the Victoria Cross), the Blue Cross, and the Amethyst campaign medal.