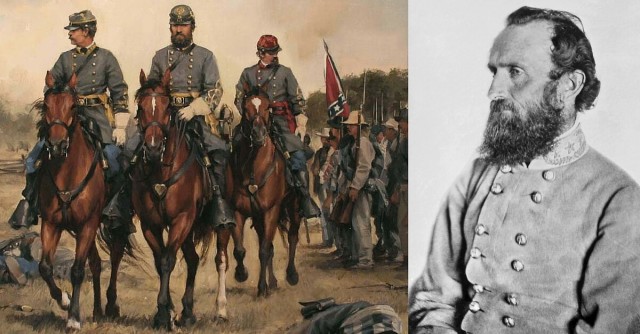 General Thomas Jonathan “Stonewall” Jackson is widely regarded as one of the greatest tactical commanders in American military history. Though it was his solid determination to hold ground at the First Battle of Bull Run that earned him his nickname, it was the Valley Campaign and his encirclement of a Union army that earned him global renown as a tactical genius and a place in history.

Despite his brilliance, Jackson was a deeply flawed commander, whose failings prevented him from achieving even more.

Jackson was a fanatical Presbyterian and a deacon of the church, who had an unquestioned faith in God, a belief in the literal truth of the scriptures. This faith gave him great strength and courage, as he feared divine judgment far more than he feared injury or death at mortal hands.

But this religiosity also tainted his approach to command. He held Sunday sacred to a degree that was extreme even for the time. He avoided both work and secular conversation on the Lord’s day. Regarding fighting on Sunday to be a sin, he would only do so after much soul searching and great personal debate. In one of the first total wars of the modern era, avoiding combat and even command on one day in seven was a serious limitation.

This was exacerbated by Jackson’s approach to promotion among his troops. He is said to have preferred good Presbyterians over better qualified officers, leading to a force that lacked the best possible commanders, and whose leaders were full of the same prejudices and limitations as its commander.

A Stickler for Orders

It is good for any soldier to follow orders, but too much rigidity can limit a commander or cripple a soldier. Jackson’s attitude to command was in line with his religious disposition, being stiff and unswerving in adherence to the rules. While training at the Virginia Military Institute, he refused to deliver a report a single minute earlier than he had been told to. He ended up pacing in a driving hailstorm outside the Superintendent’s office rather than provide his message early and get into shelter.

This attitude was further shown by an anecdote from his days as a junior officer. Having received no orders to change his heavy military greatcoat, he wore it all through the sweltering heat of a long summer, rather than act on his own initiative.

Jackson showed incredible ability when he was confident that he had leave to make his own choices. But when an order was in place, he would stick with it.

Jackson was extremely capable at reading between the lines of the orders provided by his commanders, in particular, those of General Robert E. Lee. When sending commands to Jackson, Lee could provide instructions that were broad and focused on the end goal rather than how to achieve it, safe in the knowledge that Jackson would correctly understand and execute what Lee expected of him. There was no need to share details.

Unfortunately, this implicit understanding did not extend to Jackson and the officers beneath him. It could be argued that he merely expected them to show the same level of obedience that he had. Regardless of the cause, his failure to share details of his plans made his command style seem secretive.

The men beneath him often didn’t know about their commander’s intentions until the very last minute. This left them unprepared, both practically and psychologically, for what they would be asked to do. It also fostered an atmosphere of distrust and resentment toward Jackson.

Jackson suffered from a range of ailments that impeded upon his ability to command. Service in the artillery had left him with notable hearing loss in both ears, a bar to good communication, but most of his difficulties were not caused by the army life. It has been argued that some of his symptoms may have stemmed from Asperger syndrome or a herniated diaphragm. Given the medical understanding of the era, all we can be sure of are  Jackson’s symptoms.

One of the biggest issues was Jackson’s need for sleep. He slept for long stretches and was easily exhausted, to the point of falling asleep while still eating his food. After the Valley Campaign, he was completely wiped out, on the verge of collapse from fatigue and the stress of the campaign. But when Lee called upon him to participate in the Seven Days’ Battle, Jackson did not tell his commander about his ill health, possibly due to a sense of duty, possibly because of a lack of self-awareness. Lee relied upon Jackson to play a vital role in the fighting, but the expected support from Jackson did not emerge, as his weariness finally overtook him. Jackson’s troops sat inactive while their commander slept and their Confederate comrades died in droves.

One ailment Jackson did believe in was that one of his arms was shorter than the other. He frequently held his longer arm up, adopting an awkward pose because he believed that it would improve his circulation.

Compared with his other failings, Jackson’s poor horsemanship seems like a minor thing. But this was an age when generals commanded from horseback when riding allowed them to save their energy on long journeys and reach important places at speed, when the height of a horse gave them a better view of the combat and when their level of horsemanship affected how others viewed them. Horsemanship mattered.

William Andrews, a volunteer from Georgia, recorded the general’s poor horsemanship. His stirrups were too short, his knees too high, and his feet turned at the wrong angle. He was neither an elegant nor an impressive rider and this often meant that he made a poor impression on the troops he was leading into battle.

Yet despite all these faults, Jackson played a vital role in the Confederate army and is rightly remembered as a military great. Any commander will struggle with their flaws, but the truly great can overcome them, this was not the case with Jackson. As a result, it is safe to say that Jackson was a flawed military genius.