“I am a true Roman Emperor; I am of the best race of the Caesars – those who are founders.”
– Napoleon Bonaparte, 1812.

Throughout much of European history, the Roman Empire has been held up as an example of what could be achieved – a nation that was powerful in war, well governed and a society that produced great art and literature. This idealised view of the Romans provided the inspiration for many of the great figures of the 18th-century enlightenment, and Napoleon was among them. He sought to associate himself with the great rulers of the Roman empire – men such as Augustus, Trajan and Constantine. In building his own system of government, he modelled it on Roman models of  government and empire.

Napoleon was a great military innovator, allowing him to defeat almost any other commander in Europe. But as well as looking to the future he drew from the past, creating symbolic and practical connections between his army and that of Rome.

In practical terms, the very fact that the head of state was an Emperor who led the armies followed the Roman model. This was a reflection of how Napoleon rose to power, having been inspired by the Roman greats since his youth. To him, it was the most natural thing in the world for an able military commander to seize control of the nation, even as military and political authority were increasingly separating elsewhere in the era of professional armies.

The use of auxiliary forces from captured territory also followed a Roman model. There were men in France’s satellite states more than willing to fight for the Empire, but much like Rome under the late Republic and Early Empire – that nation’s glory days – Napoleon kept these foreign troops in their own separate formations, supporting the core citizen army of the homeland.

Most tellingly, the armies of France marched beneath eagle banners, like those of Rome. As with the Roman legions, these became symbols of great pride, with men dying to protect them from capture. 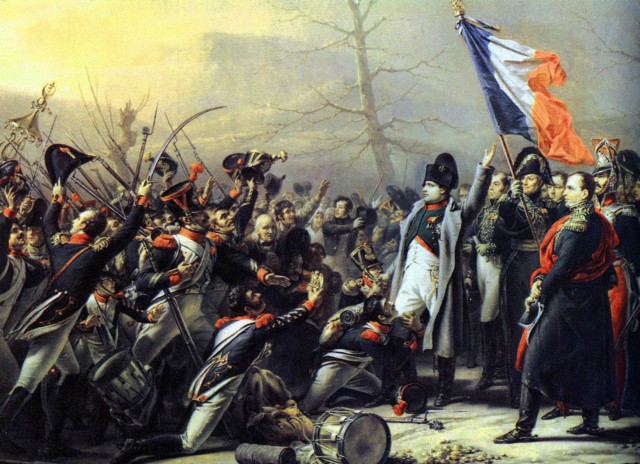 It was not just in the army that Napoleon spread symbols of a connection with Rome. In civil life, the parallels between him and the Caesars were even more clearly drawn.

Various artworks of the period present Napoleon in heroic poses and situations identical to those of his Roman predecessors. This is very well seen in Andrea Appiani’s painting Apotheosis of Napoleon. Completed in1807, this depicts Napoleon bare-chested like an ancient sculpture, his arm and legs draped in a toga, a laurel wreath on his head. He gazes out from a throne, a thoughtful look in his eyes. This is Napoleon as ruler, dressed in Roman costume, as portrayed by an artist the Emperor himself sponsored.

Such images of the Emperor were not just for grand palaces but were seen everywhere. Coins bearing his likeness showed Napoleon wearing a laurel wreath and almost identical to images of Augustus. In everyday life, the French were presented with Napoleon as the new Caesar.

The Roman emperors were famous for the grand buildings and statues with which they littered their empire – they were designed to proclaim the power of Rome and the emperor. Napoleon followed this model. Inspiring statues of great heroes were placed around the country, particularly in Paris, which to Napoleon was the new Rome.

Other constructions followed specific Roman examples. Paris’s famous Arc de Triomphe, and other triumphal arches, imitated the Emperor Constantine’s arch in Rome. The Vendôme column, built between 1806 and 1810 to celebrate the victory at Austerlitz, was based on Trajan’s Column in Rome. It even followed it exemplar’s pattern of using a spiralling image all the way up the column, depicting the glories of the successful army.

Relationship with the Church

Napoleon’s choice to imitate the architecture of Constantine was a significant one. As the emperor who converted Rome to Christianity, Constantine was a vital figure in the history of the church and the continent. With most of his subjects still Christian, Napoleon wisely made use of this connection.

Like Constantine, Napoleon sought to use religion, and in particular Christianity, to unite his empire. Though he had risen to power on the back of an anti-clerical revolution, he had himself crowned in a religious ceremony by the head of the Catholic Church, Pope Pius VII. He sought to re-establish the power of Rome’s Christian emperors, with authority over religious as well as secular life, appointing bishops, summoning church councils and seeking reconciliation among Europe’s fractured religious community to  strengthen his power.

He also followed Constantine’s example of using prayer to gain victory, whether through divine intervention or the effect on morale. In 1805, he sent letters justifying his war to be read in churches. Bishops were given the task of finding scripture that showed he was protected by God – a source of legitimacy used by Romans from Constantine onwards.

Napoleon was far from unique in following the Roman desire for conquest. But he was particularly eager to use the Roman model as an example and there is no doubt that it inspired him. He was concerned with conquering Europe, rather than distant colonies across the seas. He saw these wars of conquest as  civilising, just as the Romans, did and bringing the political and social liberation achieved by  post-revolutionary France to nations still suffering beneath old style governments.

Rome as the Second City

Paris was the new Rome, but Napoleon didn’t neglect the original. He gave his son the title “king of Rome”, previously the title of the heir of the Holy Roman Empire. In 1811, he came up with plans for a grand palace in Rome, to provide a secondary seat of government for his empire and a home for his heir. He didn’t just want to follow the models and the trappings of Rome – he wanted to be associated with the grandeur of the city itself.

In order to understand Napoleon and his Empire, it is essential that the influence of Rome on the French Emperor is understood. The Napoleonic age was decisively shaped by the legacy of Rome.