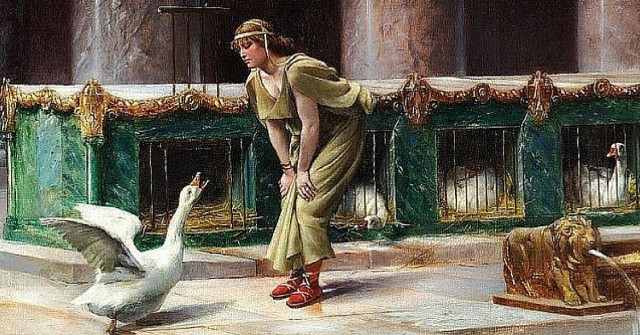 Rome is often viewed in a few set periods. The Fledgling founding by Romulus, the Punic Wars, the Civil wars and Empire, and finally the fall. Once Rome grew to cover most of Italy they it exploded into the Mediterranean, scooping up new territory with almost every war, but the struggle for Italy was a long and taxing period for Rome.

They fought many fierce enemies near and far and in wars lasting generations. The great siege of Veii was a monumental undertaking of a strong rival city only ten miles away, and that took approximately ten years to complete.

When hordes of Celts came rampaging through Italy, the Romans were simply not prepared for the new and fearsome enemies from outside their familiar Italy.The Celtic expansions of the 6th-3rd centuries BCE caused a lot of early commotion throughout Europe. It would bring about the growth of a Celtiberian realm in Spain, and the Celts traveled so far that they formed their own state in the middle of modern Turkey. A group of Celts known as the Senone was led through Italy by their commander, Brennus. 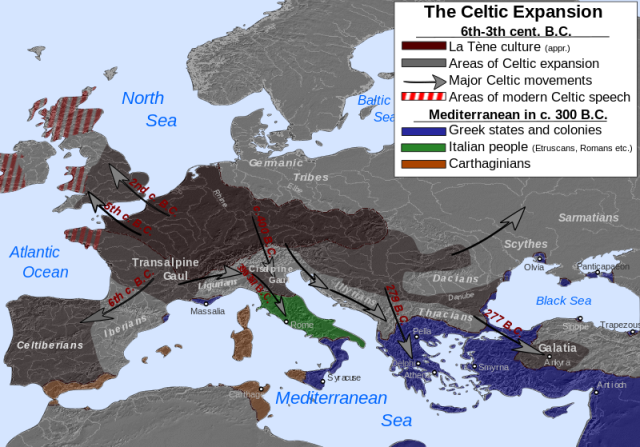 The Senone Gauls were threatening the nearby town of Clusium, when Roman Ambassadors from the Fabii family were sent to negotiate peace for Clusium. The Romans were notoriously aggressive, and so it is only a little surprising that when a scuffle broke out between the Gauls and Clusians, the Fabii joined in and actually killed a Senone chieftain.

The Roman people voted to decide the fate of those who broke the sacred conduct of ambassadors, but the Fabii were so popular that they were instead voted to some of the highest positions in Rome. This absolutely infuriated Brennus and his people and they abandoned everything and headed straight for Rome.

Rome was woefully unprepared for this sudden attack. The Gauls had marched with purpose, declaring to all the towns they passed that they would not harm them, they were heading straight for Rome. The numbers are heavily disputed for this battle with figures ranging from 9,000 to 40,0000 for either side. It seems likely that each side had about 12-15,000 men, but the Gauls had hardened veterans and the Romans mostly raw recruits. The Romans had also earlier exiled a celebrated commander Camillus on corruption charges.

The battle for the defense of Rome was fought near the Tiber and Allia rivers. The Gauls seemed to have a slight numbers advantage and the Romans, under command of one or a group of Tribunes, decided to put a reserve force on a nearby hill. The hope was to counter-flank the Gauls if the broke through the Roman center or enveloped the wings. Brennus saw through this and decided to send a force straight at the Roman hilltop reserves.

The surprised Romans soon fled. The rest of the battle was an utter disaster for the Romans, likely fearing this new and significantly larger enemy. Many Romans scattered to the recently conquered Veii and many others went to Rome. Many drowned trying to cross the river while still wearing armor.

The Gauls were astonished by how easy their victory was. Rome only had control of a few dozen miles around their city but had built up a powerful reputation throughout Italy. It took only a day for the Gauls to reach Rome, and again they were surprised by how lightly defended it seemed to be.

The light defense was due to the sheer panic following the battle, only a small portion of the survivors were able to make it back to Rome. People fled to nearby cities or the country, many of the priests and priestesses took their religious artifacts out of the city. Those who stayed mostly fortified the steep Capitoline Hill, though some of the nobles and elderly decided to defend their homes.

When the Gauls stormed the walls they killed these lingering men and rampaged through the city. They soon realized that the bulk of the remaining inhabitants were entrenched in the tall Capitoline hill and promptly attacked, full of confidence from their earlier victories. For the first time, the Romans effectively fought back, easily holding the high ground.

The assault a disaster, Brennus decided to simply lay siege to the hill and sent his men out to forage supplies. Here they came to blows with the exiled Camillus, who organized a resistance from a nearby town. Back in Veii the disgraced Roman survivors fought back against some Etruscan Raiders hoping to take advantage of the defeat. The Romans in Veii marshaled under the command of Quintus Caedicius, a respected Centurion.

It is from here on that some truly unbelievable, almost humorous events ensued. To get permission for the exiled Camillus to lead, Caedicius had to get approval from the senate on the besieged Capitoline. A messenger snuck through the Gallic camp and scaled the unguarded cliff side of the hill to deliver the message. It was quickly decided to restore Camillus to his command and to give him dictatorial powers and then the messenger snuck his way out again.

Though official word was received the attempt greatly risked the lives of all who resided on the Capitoline for the Senone scouts discovered the messenger’s footprints and figured out that there was a way to scale the cliffs. They choose a night with a full moon and sent their bravest warriors up the cliff. The ascent was so skillful that neither the Roman sentries nor their dogs noticed anything, but the Geese did.

The Geese were actually a sacred animal of Juno, kept and fed on the Capitoline despite the dwindling food. they began quacking and honking relentlessly and some of the sleeping Romans were awakened. The first to respond was a man named Manlius. Manlius did not hesitate for a second and charged the few Gauls cresting the top of the cliff. He killed one and pushed another off the cliff with his shield.

Soon other Romans joined the fight and killed the remaining Gauls as they came up. Other Gauls still clinging to the rocks had little hope of survival as the Romans threw javelins and rocks at them until they fell to their death.

After this battle the Gauls themselves suffered some disease and food shortages, as they laid siege to the Romans. With both sides in a difficult position, negotiations were made to pay the Gauls to leave. As the humiliated Romans loaded gold onto the scales they noticed that the Gauls were rigging the weights to make the Romans pay more than agreed.

Brennus calmly threw his sword on with the Gallic weights and said the famous words “Vae victis” meaning “woe to the vanquished/conquered”, words that the Romans would take to heart. Successive generations would fight with great ferocity in order to never hear those words again.

The sources are unclear, but it seems that before the transaction of gold was actually complete the Dictator Camillus appeared on the scene. As dictator, he declared the gold deal void and demanded that the Gauls leave immediately. Camillus told the Romans that they would win back their city through steel, not by gold.

The Gauls were furious by the retraction of the gold that they were so close to acquiring and marched out to attack Camillus’ newly formed army comprised of the survivors of the earlier battle at Allia and many new volunteers. The Romans under the skilled command of Camillus won an easy victory and attacked the retreating Gauls and completely sacked their camp and killed almost every Gaul.

The sources for this story are often not in agreement  were written generations after the events. The Geese are a common theme and their saving of the Capitoline is just crazy enough to be plausible. Camillus’ timely intervention and complete defeat of Brennus’ army may have been added to make for a less humiliating story, though other humiliating aspects are left in the accounts.

The ambassadors flagrantly disregarding the peaceful role and killing Gauls is certainly embarrassing, despite how the men themselves were viewed by their fellow Romans.

The initial Roman defeat is never put in any sort of good light, it was a humiliating loss and represented that way. So the story could have occurred as written above through primarily Livy as a source. Other sources have the Gauls leaving with the gold and being defeated at a later date, but what we do know is that Rome was very nearly completely captured by a foreign foe, and miraculously saved by some spooked geese.