Sometimes it’s easy to forget about the history of people before writing. Technically a region without writing is prehistoric; North America before colonization, or Western Europe deep into the Bronze age. 1,000 years after the epic of Gilgamesh, and right around the (estimated) same time as the Siege of Troy and the Exodus of Jews from Egypt, a massive battle raged in Northern Europe, fought by veteran warriors around 1250 BCE and leaving hundreds, possibly thousands dead.

Evidence for this battle has been piling up for 30 years, starting with bronze artifacts. The site became a site of an official investigation after an amateur archeologist found a bone with a flint arrowhead embedded in it. From 2009-2015, large-scale excavations have uncovered thousands of finds in the two-mile stretch of the Tollense River, north of Berlin.

The excavation has unearthed the bones belonging to at least five horses and 130 men in an area of only 450 square meters. From the density of the finds and the number of weapons found, it is quite likely that the battle included at least a thousand combatants and many of the dead likely remain undiscovered.

In compact rooms filled with bones and weapons lining the tables and shelves, scientists try to reason what may have happened in this period long before writing in the region. Further dispelling the notion that many prehistoric societies were peaceful, the multiple instances of fallen soldiers with arrows still in them, and weapons with evident wear are as close to full proof as you can get for warfare. 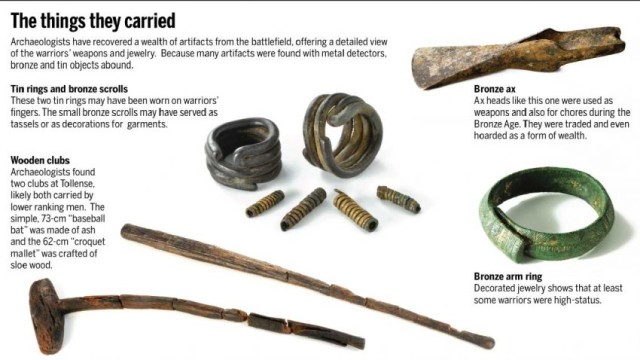 Here is what we know or can intelligently guess from the findings:

The travelers could be traders caught in the crossfire, far-ranging mercenaries, or possibly combatants who had traveled a long way to solve a trade dispute. Indeed, a likely guess for the cause of the battle might be a trade dispute, perhaps stemming from ownership of the bridge and its role in trade or taxing traders.

There seems to be a good mix of bronze and stone/wood weapons in the finds, with more bronze uncovered using metal detectors. The bone first discovered in the river has a flint arrowhead embedded in it while a skull shows the fatal penetration of a bronze arrowhead. Bronze axe heads have been discovered along with bronze and tin rings and other decorations showing that a wealthy elite likely played a role in the battle (bronze ax heads were not cheap). Wooden clubs are also very common finds.

These findings, along with the horse remains, paint a picture of a very diverse and organized army, at least on one of the sides. Almost a third of the men have evidence of past injuries seemingly gained in battle, including healed skull fractures. Many of the men seemed to have been stripped of valuables before being dumped into the river. It’s hard to say that people are missing something that’s not there anymore, but the men who were buried deeper tended to have more valuables still upon them, indicating that they were killed and sunk into the river, whereas the others were killed, looted then tossed into the river.

The tossing into the river is slightly perplexing. Evidence points to this due to a lack of scavenging animal bite marks, but after the victory, why did the victorious and surely tired warriors toss the dead into the river. Maybe the victors were the home crowd and wanted to keep their important bridge clear, maybe there was just a large amount of fighting that migrated into the river, that may have been wider and more marsh-like at the time of the battle.

The sad truth is that it is very difficult to find out exactly what happened without written records, and excavation of the entire site. On that note, the excavations have been limited by budget constraints, so if you want to know more about the battle you could help fund the rest of the digs.

This find and all of the research into it is truly fascinating. It shows that Western Europeans did have some sort of social structure comparable to societies of the East. The picture of Bronze Age Europe often shows isolated family farms and little warfare. The battle shows that an organized, veteran and a somewhat wealthy army could be organized and march to battle. if the wealthy veterans were actually all from Southern Europe then, at least, we can assume that the Northern Europeans had the capacity to organize a fierce resistance. Finally, based off of casualty estimates and the sheer amount of dead discovered, we can clearly see that that bridge was really important.